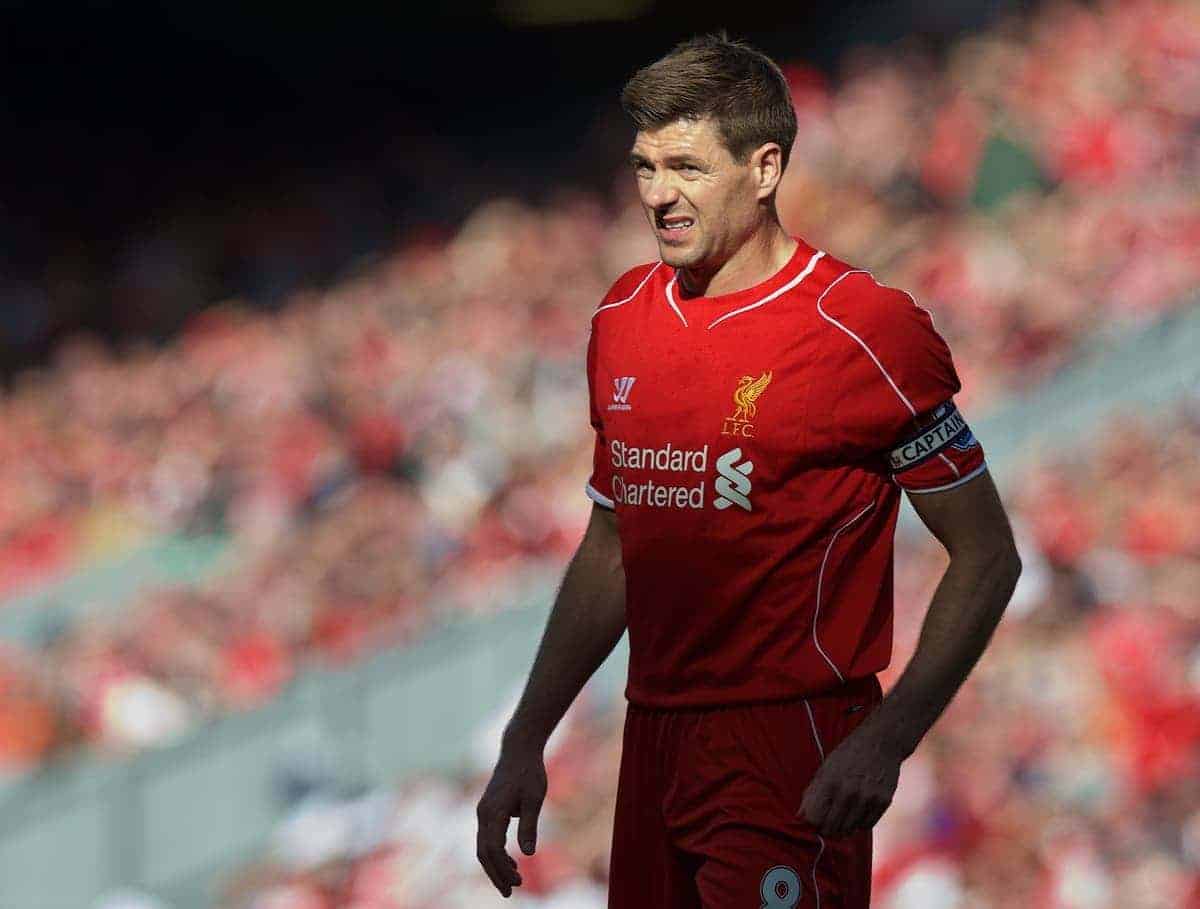 The fact that these players couldn’t get up for it for Steven Gerrard’s last game simply beggars belief, writes Jeff Goulding.

‘It aint over ’til the fat lady sings’, or so says the cliché. Truth is she may not be singing yet, but she started going through her vocal exercises at Stamford Bridge and against Crystal Palace yesterday she stepped out onto the stage ready to belt out her finale. For Steven Gerrard it will have been a bitter-sweet ending to a magical fairy-tale career.

Life is a series of moments. In the end all that is left are those instants in time; the good the bad and the indescribable. I began my final match-day of the season immersed in one such moment; a school presentation for my daughter. These are precious moments in a father’s life and as it turned out, it was good preparation for what was to come.

Being a died in the wool sentimentalist, I’d fought back the tears, heart bursting with pride as she received her award. By the end of the day I’d be risking dangerous dehydration as I watched one of Liverpool’s greatest sons receive his rewards from The Kop.

However, in clapping Stevie off the pitch at Anfield yesterday, my sadness at the end of an era was matched only by my anger at the betrayal he had suffered at the hands of his team-mates in the previous ninety minutes.

Earlier in the day, at my daughters school, it had been hard to avoid talk of Stevie’s last home game. Have you got a ticket? Do you reckon he’ll cry? What are the best odds on him to score? And of course the 64 million dollar question, would you sell your ticket? Stories of people selling tickets for as much as eleven grand have been doing the rounds in Liverpool. That’s a huge sum of money. It’s enough to pay for a decade of season tickets, yet still I couldn’t contemplate it.

Gerrard’s career has been one long series of incredible moments. Heart-stopping, jaw dropping and fist pumping moments of joy, despair and triumph. I’ve lived through them all and I have seen many of them in person. No amount of money could tempt me to miss his final precious moments in front of an adoring Kop. It should have been a send off fit for a King. In the stands it was, on the pitch it was anything but.

As I made my way to the game later in the afternoon, I reflected on the amount of times this lad from Huyton had seized the initiative and in an instant rescued the team or won the spoils. Olympiakos at Anfield, Milan in Istanbul, West Ham at Cardiff or United here, there and everywhere. So many special moments. Who’s going to fill that void now. Players who can step up, when it matters most, to deliver a winning goal or an inch-perfect pass and claim the spoils are priceless.

This is why players like Steven Gerrard are irreplaceable. It is the consistency with which he has delivered that sets him apart from the rest, but it goes further than that. Players like Steven embody the spirit of the club. They carry the hopes and dreams of a city and are the essence of each and everyone of us distilled onto the pitch. They come around once in a lifetime.

Liverpool have been blessed with some truly great players. As a kid my hero was Kenny Dalglish. There have been others who have captured our hearts, but for me Gerrard belongs in a special category of players.

He is an Elisha Scott, a Billy Liddell and a Dalglish. In Toffee language he is a Dixie Dean. These players transcend time and will live in the stories and tall-tales of successive generations of football fans. I wasn’t alive during the era of Liddell, Scott or Dean, but they live in my consciousness and are part of the rich folklore of Mersey football culture. That will be true of our current number eight.

My grandchildren and great grandchildren will know all about Steven Gerrard. Every one of those players on the pitch yesterday is privileged to share the turf with him, yet only the Palace players looked like they cared. In short Gerrard didn’t deserve that performance yesterday and many of his team-mates don’t deserve to wear the same shirt as him.

There was a huge sense of anticipation pre-match. I don’t think I’ve ever seen so many camera crews around he ground before a game. Fans were busy being interviewed or posing for the paparazzi in front of the Paisley Gates. I saw two lads holding their tickets in the air and shouting “Priceless”. Given how much money had been changing hands for a chance to see the game, they weren’t far wrong.

My seat, just under the scoreboard to the left of the Kop, affords me a great view across the famous old stand. It was a pageant of colour. There were the usual classics, but at the front huge Gerrard banners took centre-stage. There was a buzz in the air and the expectation we were about to witness something truly momentous.

Given the magnitude of the occasion I expected Liverpool to fly at Crystal Palace. There was no silverware at stake, but there was honour to fight for and the need to give the captain a fitting send off after a seventeen years of unstinting service and loyalty. The fact that the team served up what can only be described as a turgid display still angers me now. I suspect it will niggle at me all through the summer.

The fact that these players couldn’t get it up for Gerrard’s last game simply beggars belief. As the whistle went and the game got underway it quickly became clear that this was going to be a testimonial. All around me the atmosphere had been emotionally charged from the minute we took our seats, but the mood was turning to anger as the first half rolled on. When Adam Lallana eventually broke clear and finished well with his right foot the feeling was one of relief.

Every one of the Liverpool players ran to Gerrard to celebrate. Perhaps they cared. Maybe now they would get going and deliver the thrashing such an occasion demanded. It wasn’t to be and team slumped back into pedestrian mode. I don’t know if their heads were already on the beach, but they certainly weren’t at the game yesterday.

The half was drawing to a miserable close, when on 42 minutes Emre Can fouled Yannick Bolasie on the edge of the box. Puncheon struck the ball sweetly, but Mignolet didn’t even move. People all around me erupted in fury, I just hung my head in despair.

There was no way Palace were going to lie down and allow Anflied to slip into party mode. It was going to be up to us to stamp our authority on the game. Where was the passion and desire? As the players disappeared down the tunnel surely it wouldn’t be too difficult to rally them for the second half.

Instead it was Pardew’s men who came out fired up. Liverpool huffed and puffed, but they weren’t blowing anybody’s houses down. Palace got their rewards from yet another poorly defended set piece on the hour mark. Even this failed to spark the Reds into life.

Things were going from bad to worse and when Lucas replaced Lallana on 65 there was genuine incredulity on The Kop. The former saints player had been the only glimmer of hope up to that point for me. If we needed a goal, I thought he had a chance of getting or creating it. I just couldn’t understand the substitution at all.

The tension was unbearable. It wasn’t meant to be like this. There was anger and frustration all around me. There was a risk this could boil over and ruin the occasion, until the Captain himself lifted the lid and released the pressure. He attempted a shot from outside the box. It sailed high and wide and is probably in orbit by now.

The Kop paused on disbelief, before launching into a rendition of “What the fucking hell was that?” It was a moment of irreverence that broke the tension and when the skipper raised his arm to acknowledge us the crowd broke into a round of sustained applause. It may not have been the case, but in my mind it feels like we sang his name pretty much constantly from that moment on.

The penalty was salt in a gaping wound, but it changed nothing. Liverpool were sleep walking to defeat and failure anyway. They have been since the abject display against United. The referee’s whistle was a blessed relief. He may not know it but he was calling time on Liverpool’s season not just the game. It’s an end that can’t come soon enough for me. For our captain, it is hardly the send off he deserved.

As he wandered around the pitch soaking up the richly deserved adulation of The Kop, his team-mates skulked behind him and well they might. He may already be California dreamin’ but the club needs to wake up if we are to avoid another nightmare season.