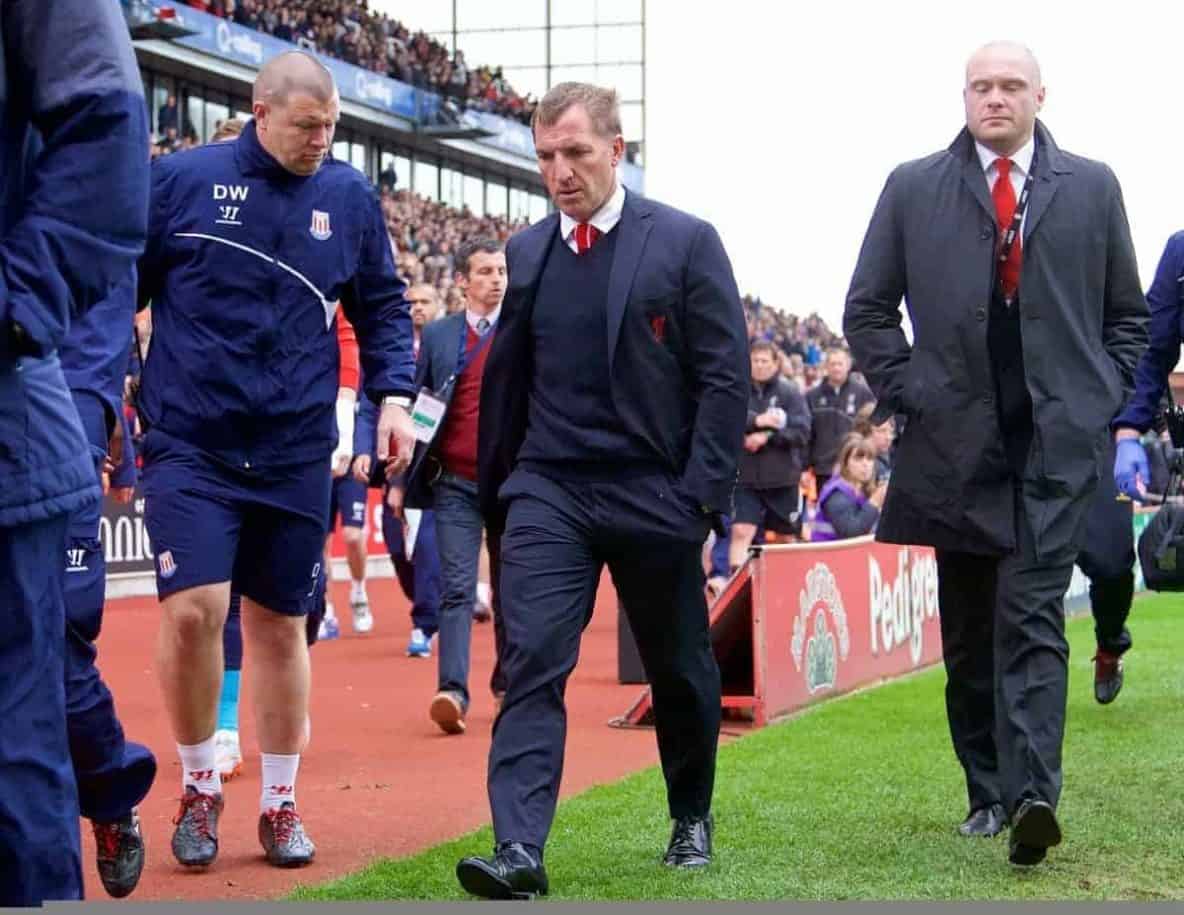 On an appalling day for Liverpool, Henry Jackson assesses each Reds performer on the day. Submit your ratings at the bottom.

Any goalkeeper who concedes six goals has had a bad day at the office, and Mignolet endured a miserable afternoon after such a good run of form.

His failure to keep hold of Charlie Adam’s relatively tame shot allowed Mame Biram Diouf to make it 1-0, and it was all downhill from there.

Once again deployed at right-back, the 21-year-old was abysmal during his 45 minutes on the pitch. It was his worst performance in a Liverpool shirt by a mile.

He carelessly lost possession time and time again, and his woeful header allowed Jon Walters to make it 3-0. The German may have been played out of position, but it doesn’t excuse his horrid display.

The Slovakian was probably one of the Reds’ less culpable players, but he was once again below-par by his recent standards. He was lucky to avoid a second yellow card in the second-half, and was partly at fault for Peter Crouch’s late goal.

Although it didn’t feel as though much was directly Sakho’s fault, he was still part of a defence that looked all at sea from start to finish.

The Frenchman’s return from injury was pleasing before the game, but he didn’t deliver as many had hoped. Like Skrtel, he was also poor for Crouch’s header.

Moreno’s first season at Liverpool has been one of frustration, and he was hugely ineffective against Mark Hughes’ side.

One wayward, hopeful cross summed up his constant unpredictability, and defensively he never looked remotely assured. Worth persevering with, but very dim at times.

There are many who are desperate to see Lucas stay at Anfield this summer, quite understandably, but this was a performance that showed his best days are well and truly behind him.

He was at fault for Stoke’s fourth goal and didn’t really stamp his authority in the middle of the park at any point.

Allen was another who completely failed to influence the game during his 69 minutes on the pitch, and it will only give more ammunition to his many detractors.

In fairness, the 25-year-old did at least show some fight, unlike others, and he used the ball better than most. Playing on the left-hand side of a midfield diamond does not get the best out of him.

Liverpool’s likely next captain was just as unnoticed as Lucas and Allen, and simply didn’t deliver enough quality form start to finish.

The England international looked as if he was lacking his usual spark, and his passing and all-round decision-making were not at their usual level. Disappointing.

This was a truly shocking way for Gerrard to end his incredible Liverpool career, but he did at least have something to shout about.

The 34-year-old scored his side’s consolation goal in the second-half, in what was a nice moment regardless of the result. He must feel like he is leaving at just the right time.

The Southampton man had a wretched afternoon, and cut an extremely angry and frustrated figure at times.

Barring one decent curling effort in the first-half, the Englishman was terrible. Physically he was weak, technically he was inconsistent and even his attitude could be put into question.

After such a fantastic season individually, Coutinho was virtually anonymous at the Britannia Stadium. The 22-year-old never got into the game, and when he did get on the ball nothing came of it.

The Brazilian can’t always be the man to ignite Liverpool creatively, and it is team performances like this that may make Coutinho question his Reds future.

The Ivorian did little wrong when he came on, but Stoke were playing in first gear by that point.

The 19-year-old was the only bright spark on a dreadful afternoon, barring Gerrard’s goal. He looked very lively down the left-wing, and his attitude put many of his more experienced teammates to shame.

Lambert won the header that saw Gerrard run on and score, but was otherwise ineffective. Surely his last Liverpool appearance.

Is this the day when Rodgers lost his job? It’s hard to see the Northern Irishman coming back from this embarrassment.

Once again he played Can at right-back, which backfired spectacularly, and he didn’t field a striker until 69 minutes into proceedings.

It really does feel as though Rodgers has now completely lost the plot, and for the good of the club, it’s time he was sacked. He looks to have lost the dressing room too, which is fatal.