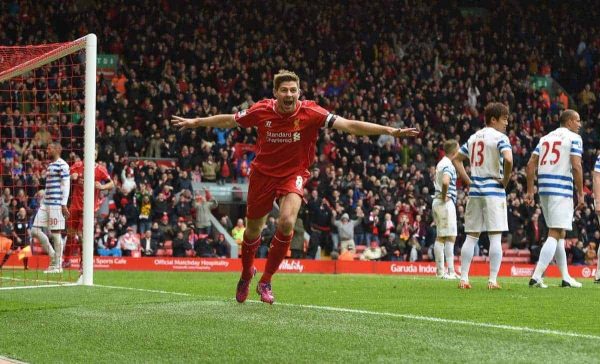 With Steven Gerrard’s late header sealing Liverpool’s 2-1 victory over QPR on Saturday, manager Brendan Rodgers was full of praise for his captain.

Brendan Rodgers, speaking to the BBC after the game, recognised the match-winning ability of Liverpool captain Steven Gerrard, who is set to depart from the club in the summer to join MLS franchise LA Galaxy.

The manager described Gerrard as a “truly remarkable player.”

“He’s made a career of that, Steven. The big goals, a big contribution.

“I’ve seen a lot of players, I’ve watched hundreds and hundreds of games over my career and been involved in games where someone misses a penalty and it affects them and they go the other way [and drop off in form].

“With him you know that if he misses a penalty, it actually inspires him even more. So it didn’t surprise me that he got the header…He’s done that all of his career.”

Rodgers also praised 22-year-old playmaker Philippe Coutinho, whose goal opened the scoring for the Reds in the first half.

“It was a good move on the counter-attack, we worked the ball well and Rickie Lambert made a great pass.

“When he peels out onto that left corner and comes inside, he can go either way – he’s got a wonderful technique and it was a great finish, too.