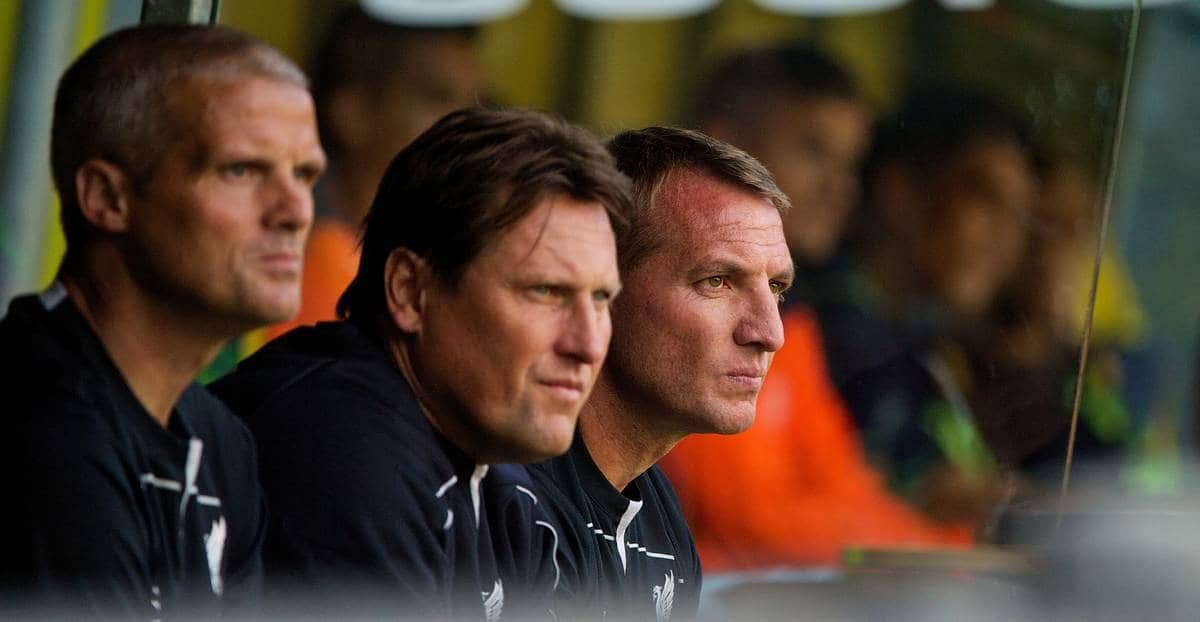 The fall-out from Liverpool’s end-of-season review is already being felt with assistant manager Colin Pascoe set to leave the club.

This Is Anfield understands the departure of the Welshman, who had 12 months remaining on his contract, is a direct result of the outcome of talks between Reds boss Brendan Rodgers, chairman Tom Werner and Fenway Sports Group president Mike Gordon.

Rodgers was close to Pascoe, whom he brought with him from Swansea in June 2012, however he has fallen victim to the “comprehensive plan for improvement” agreed after Tuesday’s meeting.

It is understood it was a “mutual decision” by all three at the meeting to dispense with the services of Pascoe.

The overhaul of backroom staff had already begun with first-team coach Mike Marsh’s contract not being renewed.

In the wake of the news of Marsh’s departure earlier in the day speculation had begun over who will replace him.

Former players Sami Hyypia, the ex-Bayer Leverkusen and Brighton manager, and Bolo Zenden, who served as interim assistant manager to Rafa Benitez at Chelsea in 2012-13 season, were two early names suggested, and after Pascoe’s exit the list will grow.

Recently-retired defender Jamie Carragher had been tipped to move into coaching when he quit two years before deciding to become a television pundit while departing captain Steven Gerrard – who has been offered a role at the club when he returns from the United States – is taking his coaching badges but has an 18-month playing contract with Los Angeles Galaxy to fulfil first.

Another name already mentioned is that of Pako Ayestaran, who worked as Benitez’s assistant for the first three years of his reign at Anfield – which took in their 2005 Champions League victory – who has just left Maccabi Tel Aviv after guiding them to an unprecedented treble in the Israeli League.

The club could, of course, recruit from within but one of the criticisms aimed at Rodgers during his difficult run of results last season was that there was a lack of experienced personnel in his backroom staff.

Planning for next season continues on the pitch with the club continuing to scour the market for summer bargains with Bolton’s out-of-contract goalkeeper Adam Bogdan under consideration.

Rodgers wants to bring in someone to challenge Simon Mignolet, who regained the number one spot in December after briefly being dropped following a number of unconvincing performances.

Injury to Brad Jones afforded the Belgium international a quicker-than-expected return to the side on Boxing Day and with Jones now out of contract the only other goalkeeper in the first-team squad is only Wales Under 21 international Danny Ward.

Bodgan is set to leave Bolton after reportedly not responding to the club’s offer of an improved contract. At 27 and with 19 caps for Hungary, who he is currently on international duty with, he is a player Liverpool are interested in.

“I am confident that soon will decide my fate,” he told Nemzeti Sport back in his homeland. “My goal is to play at a higher level but it also depends on where you get a chance.

“We’ll see, everything is decided in the next week or two.”

The Reds have already agreed a deal to sign Manchester City midfielder James Milner, who becomes a free agent at the end of the month, and are also at an advanced stage in talks with England Under-21 striker Danny Ings, whose contract expires with Burnley on June 30.

Ings will command a fee in compensation because of his age but Liverpool are hoping to agree a suitable deal with the Clarets for between £5million and £6million – otherwise the valuation will be made by a tribunal.

The future of Raheem Sterling, who has been linked with moves away after rejecting a £100,000-a-week contract in January, continues to dominate the headlines. [td_ad_box spot_id=“custom_ad_3″]

However, despite reports suggesting both Manchester clubs were preparing bids for the 20-year-old, who still has two years remaining on his contract, the club’s stance has not changed and they have no intention of selling the England youngster.

Liverpool have also announced a freeze on matchday tickets for next season, having already made a 10 per cent reduction for junior season tickets and kept all adult general admission season tickets the same price.

“We have worked in collaboration with the ticketing working group as we look at practical initiatives to increase accessibility and affordability of tickets at Anfield,” said chief executive Ian Ayre.

“We now have an opportunity, with the Main Stand expansion providing increased capacity for the 2016-17 season, to explore further ticketing initiatives with the group.”