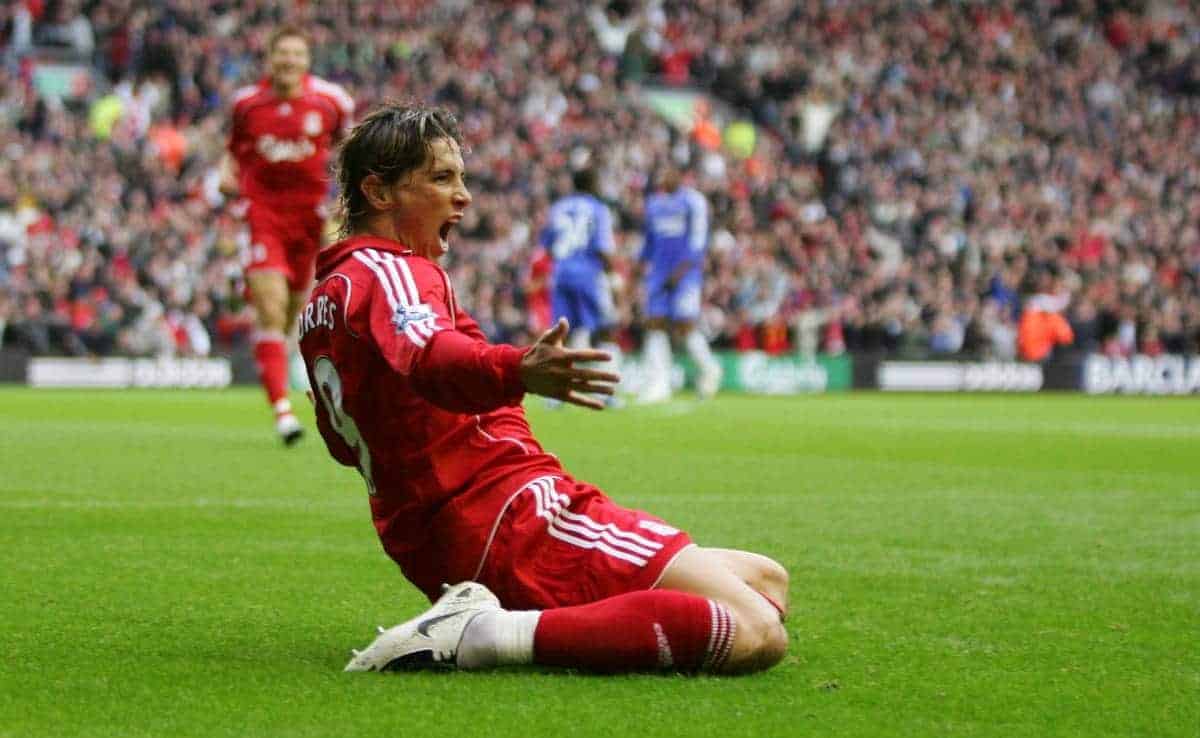 Although things may have ended a little bitterly with Fernando Torres when he joined Chelsea in January 2011, he was still one of Liverpool’s best players of the Premier League era.

We were fortunate to see the Spaniard’s peak years spent at Anfield, after he joined for £20.2 million from Atletico Madrid on 4th July 2007, and his tally of 81 goals in just 142 appearances is a truly world-class return.

During his three and a half years on Merseyside, Torres scored some majestic goals, inspiring Liverpool to victory time and time again.

Here are his 10 greatest Reds strikes:

Clashes against Manchester United are invariably tight, hostile affairs that can all come down to a piece of individual brilliance, and Torres proved to be the difference against Sir Alex Ferguson’s side in 2009/10.

Having beaten Inter Milan 2-0 in the first leg of their Champions League last-16 showdown at Anfield in 2008, it was Torres who put the tie to bed at the San Siro.

Bringing down Fabio Aurelio’s pass to perfection, Torres then swivelled and fired a brilliant effort past Julio Cesar.

Once again he had delivered in a big game.

There was much anticipation over Torres’ Anfield debut in August 2007, and he showed exactly why Liverpool had paid so much money for his services when Chelsea visited.

A typically inch-perfect Steven Gerrard pass found the former Atletico hero in space, and the then 23-year-old sped past Tal Ben Haim and finished coolly.

A new Anfield star was born.

Torres was in sensational form by the time Middlesbrough visited Anfield in early 2008, and his hat-trick inspired Liverpool to a 3-2 win over the North East side.

It was his second goal that was the pick of the bunch, with the Spaniard rifling a stunning 20-yard effort past the hapless Mark Schwarzer.

Torres had plenty of joy against Chelsea down the years prior to his controversial move to Stamford Bridge, and this strike a couple of months before his Reds exit was his best.

The 2-0 win against the Blues was a rare good day during Roy Hodgson’s awful reign as manager, and Torres got both goals on the day.

His second was sublime, as he cut inside and bent a wonderful shot past Petr Cech and into the far corner of the Anfield Road net.

El Nino always loved to drift out to the left and wreak havoc, and this was never more evident than against Sunderland back in 2010.

Torres shimmied his way past Michael Turner, before curling an outrageous effort right into the top corner in front of the Kop.

There was no finer striker on the planet when he was in this mood.

Although perhaps not as obvious a goal to include as some of his curled efforts or thumping strikes, this wonderful piece of artistry against Newcastle United was Torres at his sensational best.

Having nodded the ball down for Gerrard near the halfway line, Torres was then found by the skipper with a wonderful through-ball. The Spaniard produced a Pele-esque dummy on Steve Harper, before finishing ruthlessly.

Torres and Gerrard were the best front pairing in Europe at that time, and this goal outlined their genius.

Picking the ball up on the left-hand corner of the penalty area, he brilliantly weaved his way past a couple of challenges, then caressed a delightful finish into the far corner.

Liverpool’s 4-2 win over Arsenal in the Champions League quarter-final second-leg in 2008 was one of Anfield’s greatest European occasions, and Torres predictably played a key role on the night.

With the score finely poised at 1-1, and 2-2 on aggregate, the Spain international chested down Peter Crouch’s flick-on, made space for himself and hit a magnificent shot past Manuel Almunia.

Anfield erupted, and Torres celebrated his greatest European goal for the Reds.

There may have been more important goals scored by Torres in a Liverpool shirt, but his sensational strike against Blackburn in 2009 just has to be No. 1.

Jamie Carragher’s long ball found the chest of the then-25-year-old on the right-hand side of the area, and out of nowhere, the world-class striker spun and volleyed an outrageous shot into the top corner of Paul Robinson’s net.

It was the best of his 81 Liverpool goals.