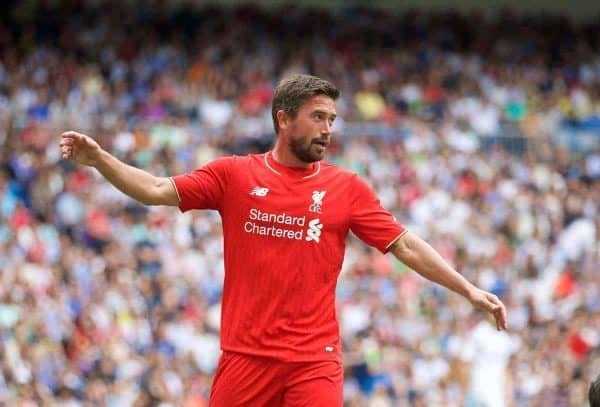 Following reports that a former players could join up with Brendan Rodgers’ backroom staff this summer, Harry Kewell has been linked with an academy role.

Former Liverpool winger Harry Kewell could be set for a return to Merseyside this summer, with reports linking him with an academy role.

Kewell, 36, retired in 2014 and has since looked to establishing himself as a coach.

Reports from the Mail‘s Matt Barlow suggest that this could be at Liverpool, with Watford also interested in appointing the Australian.

“The former Leeds and Liverpool winger, who retired last year after ending his playing career with Melbourne Heart in the A-League, has established a youth academy in his native Australia and is keen to return to England to launch a coaching career,” Barlow writes.

“Liverpool have also shown an interest in luring the 36-year-old back to Merseyside as part of their youth development set-up.”

However, Barlow continues: “But Watford are confident they can tempt him with a key role in owner Gino Pozzo’s plans to establish the club in the Premier League.”

Kewell is reportedly in the running for the role of Under-21s manager with the Hornets, who were promoted to the Premier League following their 2014/15 triumphs.

However, with previous reports claiming a former player could be set for a position in Brendan Rodgers’ backroom staff, Kewell could well return to Anfield.

With Pepijn Lijnders vacating his role as Reds Under-16s coach to become Rodgers’ first-team coach, Kewell could be in line for his old position.

Regularly featuring at Liverpool alumni events, he clearly retains a passion for the club he spent five years at.

Already closely involved with youth development, Kewell could be a shrewd appointment by the Reds.