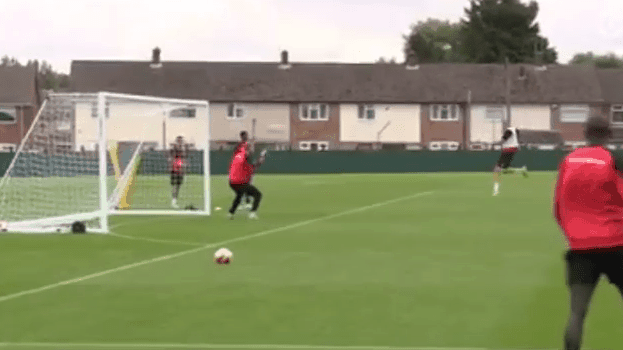 Martin Skrtel surprised a few people when he scored this well-taken volley during a Liverpool training session at Melwood on Thursday.

The Slovakian international smashed home Mamadou Sakho’s cross before posting the video to his Instagram account. Now just a few of those in real matches please, Martin.

The 30-year-old travels with the rest of the Liverpool squad on Friday to Finland for Saturday’s penultimate pre-season friendly of the summer against HJK Helsinki.

For Skrtel it is a vital time in terms of the team’s preparations, coming just a week before the opening day of the new Premier League season.

He told the club’s official website, “I think the game in Helsinki is great for our preparation ahead of the new campaign; every single player is working towards the first game of the new season against Stoke City.

“This is going to be our final test and we will travel to Finland looking to get the right result and ensure we are confident going into the first game of the season.

“It has been a tough few weeks; we have been working hard on our fitness, doing the running and conditioning drills.

“It was great to get minutes on the pitch in Australia and Asia, as well as getting some good results along the way – and we are eager to carry on in this manner, in the next game in Helsinki, so we hit the ground running.”

Liverpool get their 2015/16 campaign underway at Stoke on Sunday, 9th August. This weekend’s friendlies against Helsinki on Saturday and Swindown Town on Sunday may give Brendan Rodgers an indication of the team he’ll put out at the Britannia Staidum. Here’s everything you need to know about this weekend’s opponents.