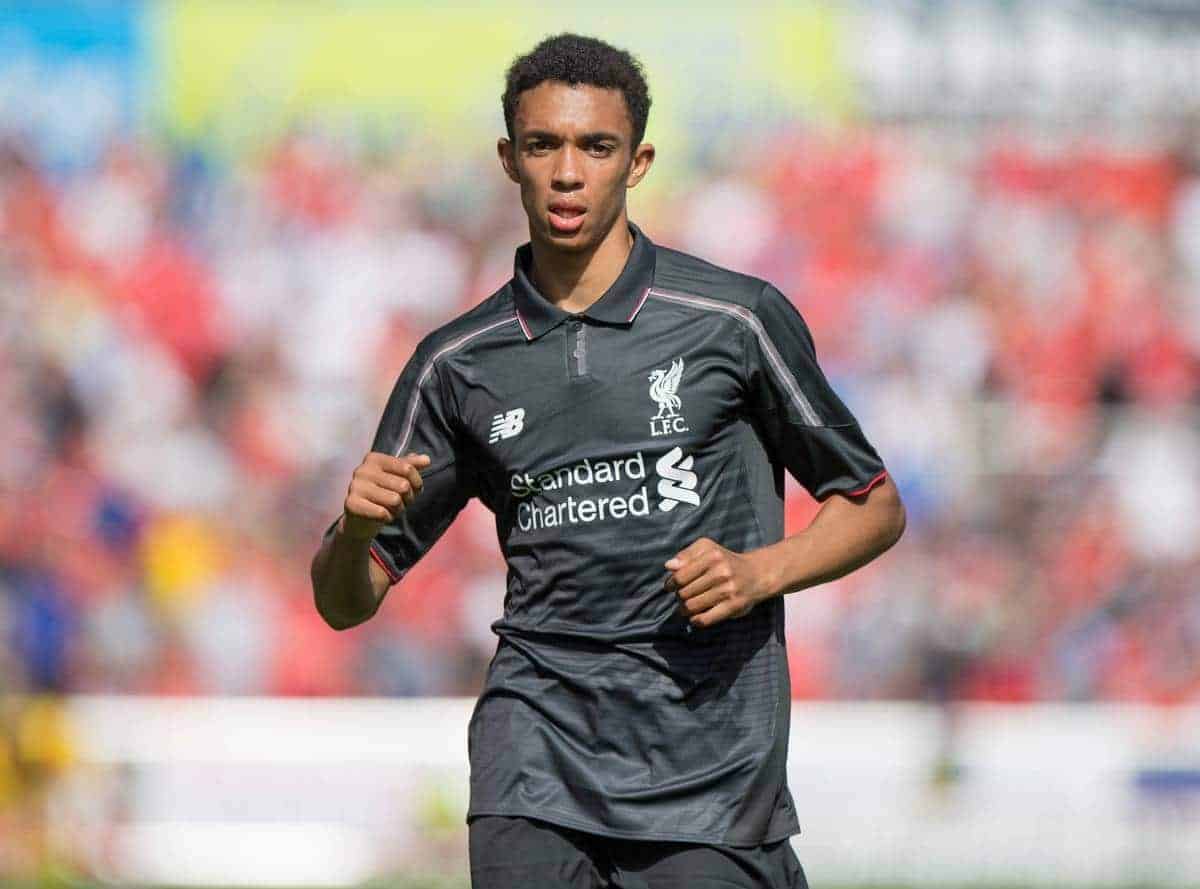 With the imminent start of the U18 league season, PJ Vaughan identifies 5 players worth keeping an eye on this season.

Trent Alexander-Arnold made his first team debut in Liverpol’s last pre-season game away to Swindon Town. Despite not being a right back he had a fine game in that position.

Alexander-Arnold hails from West Derby in Liverpool and captained the Liverpool U16s last season until he made the step up to the U18 towards the end of the season. He also played twice in the UEFA Youth league, most notably away to Real Madrid.

This summer he played for England U17s in the European Championship and is expected to be called up for the England U17 World Cup squad in October.

His natural position is centre midfield and his biggest attributes are his athleticism and ability to shoot from distance. He will be one of the star performers in the U18 midfield this season.

(Just to clarify when I say a player plays like someone I am not saying they are the next Steven Gerrard etc, this is merely to give an example of how they play).

Yan Dhanda is an attacking midfielder with an eye for a goal. He likes to pick up the ball between the lines and his running and passing cause defences problems.

Liverpool signed Dhanda from West Brom and the England U17 international has been earmarked for stardom for a long time.

Last season Dhanda made the step up to the U18 towards the latter part of the season and was involved in the UEFA Youth league. He mainly played left wing back for the U18s – a position he struggled with from a defensive view point. Furthermore it made him redundant in the game as an attacking treat due to his distance from the opposition’s goal.

Hopefully Dhanda will get to show his talents in a position more suited to his natural abilities, where his passing and vision can best be utilised.

Toni Gomes is a very hard working front man that is a natural No. 9. He is an excellent finisher and has been capped at various underage levels for Portugal. He impressed for the U16s last season and was promoted to the U18 for the latter part of the season.

He first came to prominence for many Liverpool fans when he played in this years Frenz United Cup in Indonesia. His movement and finishing makes him highly likely to be a very good player for the U18’s this season and I’d expect him to score lots of goals too.

Brooks Lennon signed for Liverpool this summer from Real Salt Lake City’s academy, where he scored over 30 goals last season. The United States Youth International was well known by the Liverpool playing staff.

Lennon played in the Frenz United Cup for Liverpool in Indonesia in 2014. The club were unable to sign him at the time due to the fact he hadn’t a European passport, however this is no longer the case as he now has an Irish passport.

Lennon is a hard working forward who can play on the right in a front three or through the middle. His best attributes are his crossing and finishing.

When Liverpool toured Australia in 2013 the club reported seeing a very exciting talent. They were referring to Jake Brimmer. Brimmer is a life long Liverpool fan and his Maltese heritage allowed him to move to the cub despite only being 16.

Last season Brimmer made the breakthrough into the U18 side when the club had a number of injures in centre midfield. He played primarily as a defensive midfielder and was very consistent whenever he played.

Brimmer reads the game very well and is equally hard working. He’s comfortable in any of the midfield positions and it’s Brimmer’s adaptability and willingness to get on with the job that will make him a firm favourite with both the coaches and his team mates. He reminds me of Jordan Rossiter in that respect.

There are lots of other exciting talents to keep an eye out for. Bobby Adekanye is a tricky wide player that we signed this summer due to his registration problems at Barcelona. He has been compare to Arjen Robben but I have not yet seen him play but from all accounts he will be one of the star players.

Paulinho is another player that is highly rated and was part of the Porto academy, again I have not seen the lad play yet either.

Herbie Kane is another highly rated attacking player who scored 15 goals for the U16s last season.

Defensive players don’t always get mentioned as exciting prospects. This may be due to the fact that Liverpool’s underage teams have been poor defensively in recent years. However Conor Masterson, Michel Parker, George Johnston, Kane Lewis are decent defenders and will hopefully get to show their talent in a team that defensively abilities are as good as their attacking ones. Shamal George is also a decent keeper.