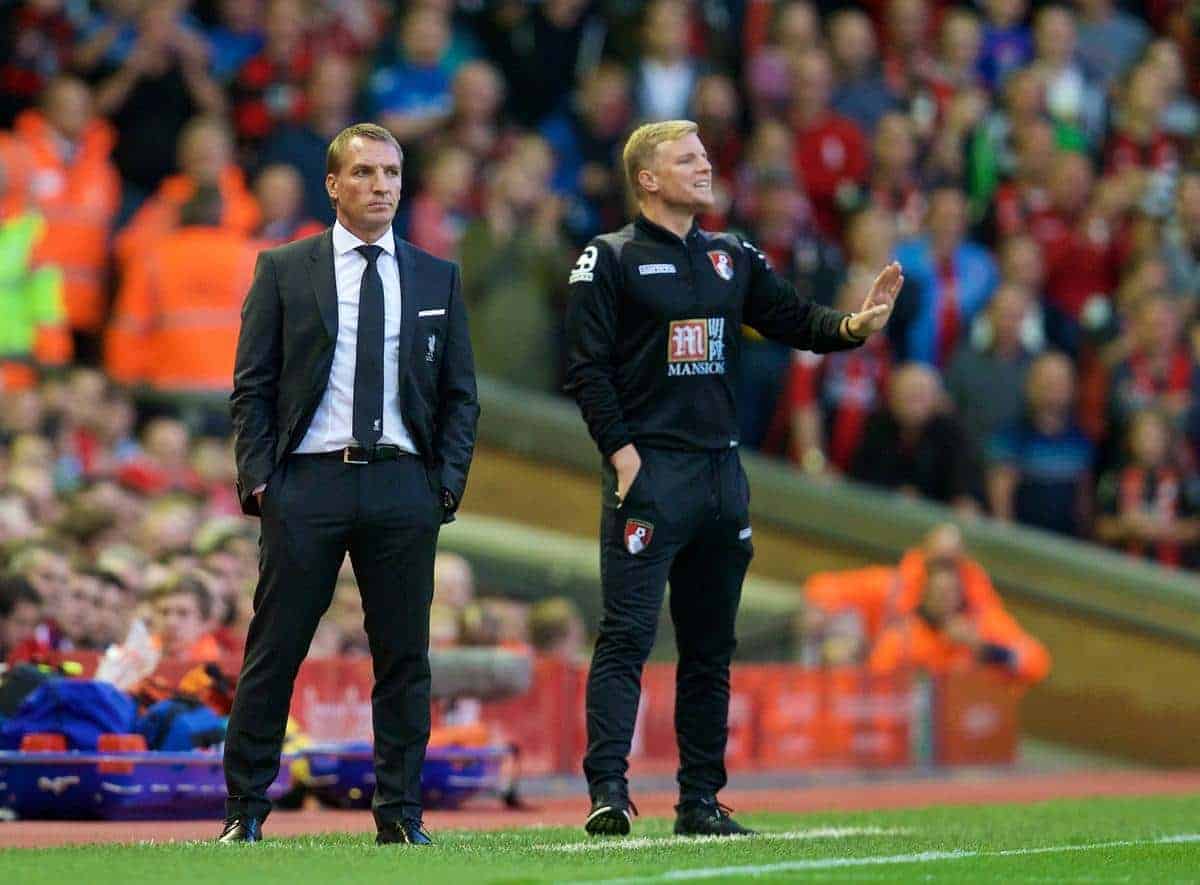 Bournemouth boss Eddie Howe had no doubt two refereeing errors had cost his side the chance of victory at Liverpool.

The promoted Cherries went down 1-0 at Anfield after a controversial Christian Benteke strike and having a goal harshly disallowed.

Benteke’s 26th minute goal was awarded despite Philippe Coutinho being in an offside position and attempting to play the ball in apparent contravention of the latest interpretation of the rules. Howe claimed he was particularly annoyed because the rule had been explained to all managers at a recent meeting.

“It is a clear offside under the new rules,” he said in his post-match press conference. “We were sat out in front of the referees and told about the new rules. I was very surprised at the time, even from my poor angle, that the goal was given.

“That is the clearest example of the new rule you will see. A yard and a half offside and he is clearly impacting the goalkeeper. I don’t think that is a tough one.”

That decision compounded Bournemouth‘s frustration after Tommy Elphick was penalised for a foul on Dejan Lovren in the process of heading home from a corner in the fifth minute.

Howe said: “Tommy has won the ball fairly. He has been aggressive but if that is a foul, we will be having fouls every time a corner goes into the box. That cannot be a free-kick in my opinion, no way.

“That is basically a two-goal swing against us. Two big decisions have gone against us.”

It was Bournemouth‘s second successive 1-0 defeat after last week’s loss to Aston Villa but Howe is pleased with how his side have acquitted themselves in the top flight so far.

They hit back at Liverpool in the second half and struck the woodwork through Matt Ritchie. Howe said: “We feel aggrieved we haven’t come away with at least a point but I am very proud of the players and overall very pleased with the performances.”

Liverpool manager Brendan Rodgers, under pressure to deliver this season, was happy to take the lucky breaks that came his side’s way.

He said of the controversial decisions: “I haven’t seen either of them again. I think we had a good period of pressure leading up to the goal and the most important thing is it was given.

“The offside rule has changed again and it adds complication for people. But at the managers’ meeting they said the advantage was looking to be with the team attacking. Thankfully the goal counted and we are happy to get the win.”

As with their season-opening win at Stoke, Liverpool lacked cohesion but Rodgers feels his new-look side still needs time to gel.

The successful home debut of £32million signing Benteke was a particular positive. Rodgers said: “I thought he was a real handful. His hold-up play is outstanding and he has a wonderful touch for a big guy. It gives us a different dimension to our game and the fluency will come.”

Rodgers added that captain Jordan Henderson was substituted early in the second because of a foot injury that had bothered him in training.