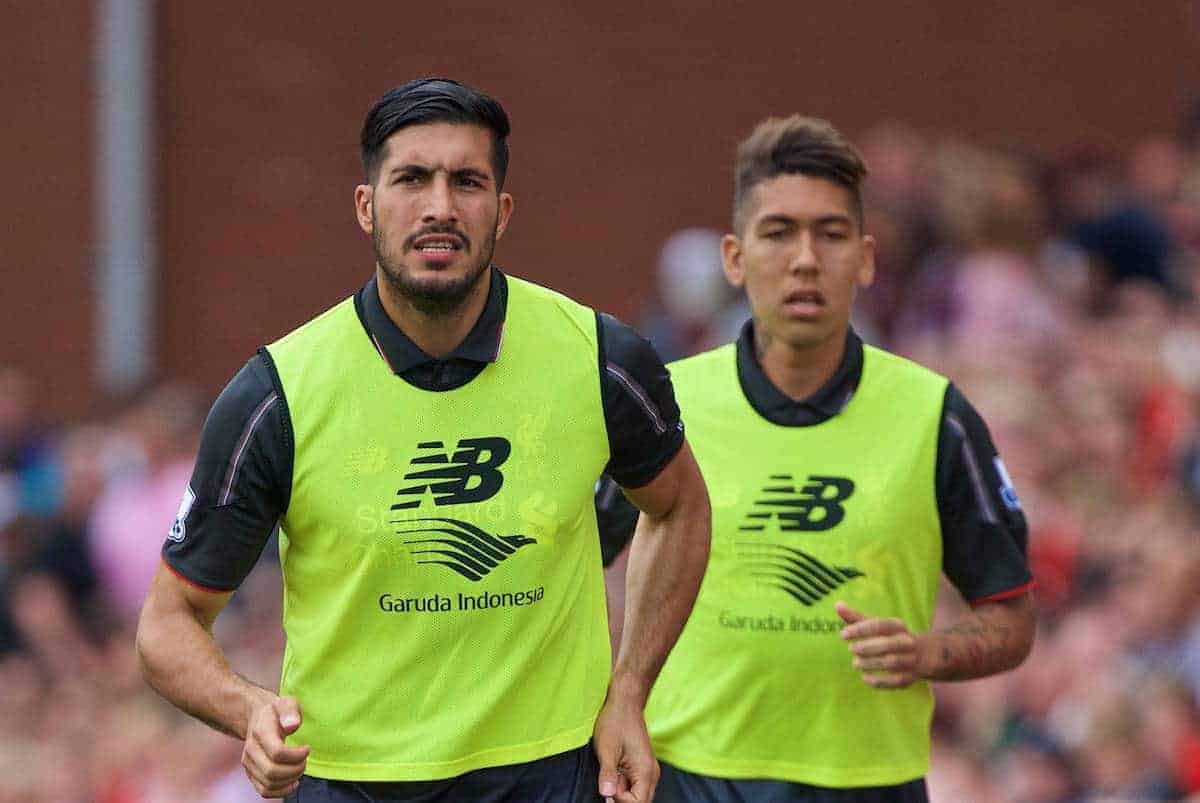 Liverpool take to the Anfield pitch for the first time this season when they host newly promoted Bournemouth in their second Premier League fixture.

The Reds will be looking to make it two wins from two against the Cherries ahead of a tough trip to Arsenal next week – after going some way to avenging the horror show of Stoke in May thanks to Philippe Coutinho’s match-winning screamer in last weekend’s season opener.

It was a welcome three points from a challenging encounter at the Britannia Stadium, and Rodgers’ men will need another strong display to overcome Eddie Howe’s team, who arrive at Anfield after a narrow defeat to Aston Villa last Saturday in which they could easily have come out with points to show for their efforts.

Rodgers’ side know all about the south coast outfit having faced them twice in recent seasons in FA and League Cup competition – with the Reds’ coming out on top in both encounters – but the Cherries will be looking to secure their first win over Liverpool in the first ever league clash between the sides.

Rodgers has a strong squad to pick from once again, but that doesn’t include Jon Flanagan, Joe Allen or Daniel Sturridge who are still sidelined, while Jose Enrique, Fabio Borini and Mario Balotelli remain frozen out ahead of potential Anfield exits.

Having kept a clean sheet at the Britannia Stadium, the Liverpool boss could stick with the same back four in hope of similar productivity, though Mamadou Sakho and Alberto Moreno in particular will be hopeful of being trusted with a starting role.

In midfield, Emre Can is pushing for a start after his impressive second half cameo as an impact substitute against Stoke, but with Jordan Henderson and James Milner nailed on starters, Rodgers may have to consider a change of shape in order for the German to play from the beginning.

The Reds’ manager – who could leave Lucas Leiva and Lazar Markovic out of match-day involvement again – faces the toughest of decisions over who will form his attacking line up with plenty options at his disposal, and Roberto Firmino could be one of those with Rodgers reportedly mulling over whether to hand the new arrival his debut.

Firmino could feature in the starting XI alongside countryman Philippe Coutinho, though Adam Lallana and Jordon Ibe will hope they showed enough in their appearances against Mark Hughes’ side to keep their shirts in the starting XI.

Christian Benteke is likely to spearhead Liverpool’s attack again on Monday night, but he has numerous options to play alongside him should Rodgers opt for that, including Danny Ings who could make his first Reds start against his former employers.

Rodgers has a number of set-ups to deploy for the match with a strong group at his disposal, but the Reds manager could decide to operate with a 4-2-3-1 set up again.

Within that, the successful back four combination – and Simon Mignolet – from last Sunday’s win at the Britannia Stadium would remain unchanged, with the midfield partnership of Henderson and Milner again starting in front of the defence.

However, Rodgers could make one alteration to his attacking midfield three, with the ineffective Lallana making way for Firmino to come in and play off the left, featuring alongside Coutinho and Ibe in support of Benteke.

With that one change, Liverpool could line up looking like this on Monday night: Having overseen a successful system switch which contributed heavily to the Reds returning to Merseyside with three points last weekend, Rodgers could start with the go-to 4-3-3 system this time. [td_ad_box spot_id=“custom_ad_3″]

The defence can again remain untouched, but Can – who played a key role last Sunday – could come into defensive midfield to offer protection to the back line while setting attacks from behind Milner and Henderson.

Coutinho and Firmino would then form a three man attacking line up alongside Benteke, with Lallana and Ibe missing out.

That change of system and two switches of personnel would see Rodgers’ side look like this come kick-off time at Anfield: BR: Building confidence early on is important. Get the vibrancy around the stadium again, early on.

After starting the season in positive fashion, Monday hands Liverpool the perfect chance to add to their good work of last week and make it six points from six as they search for an all-important quick start to the new campaign.