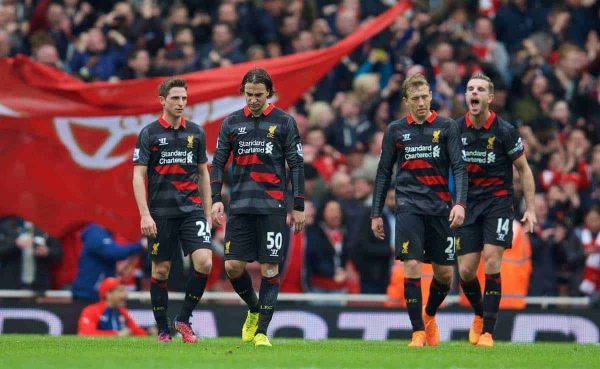 Mesut Ozil: “We know exactly how we can beat Liverpool”

Mesut Ozil has called on Arsenal to underline their Barclays Premier League title credentials with victory over Liverpool at the Emirates Stadium on Monday night.

The Gunners recovered from their opening-day home defeat by West Ham to record a battling 2-1 win at Crystal Palace last weekend.

Liverpool, though, head to north London on the back of successive victories from their first two matches.

The Reds were defeated 4-1 at the Emirates Stadium in April, with Arsenal going on to claim third place before lifting the FA Cup again at Wembley.

Ozil, who netted a fine 25-yard free-kick in that encounter, believes Monday night provides another opportunity for the Gunners to show just what they are capable of.

“I remember that we delivered a really convincing display. In the first half we decided the game because we had a high level of concentration and wanted to utilise our potential. We want to do that again this time,” Ozil told Arsenal Player.

“We are at home and we know exactly how we can beat Liverpool; that is what we want to do on Monday.

“We were highly concentrated. The manager gave us tasks on the pitch and we executed them perfectly. That’s what we will have to do on Monday again.

“We have to believe in ourselves as we have the potential to beat every team and we will show that on Monday.”

Ozil delivered a virtuoso display at Selhurst Park last Sunday, completing a 98 per cent pass accuracy which included setting up Olivier Giroud for the opening goal.

It has been a solid transition for the German playmaker, who became the club-record signing when he joined from Real Madrid in September 2013.

Gunners boss Arsene Wenger has been impressed by the progression of the World Cup winner.

“Mesut is now completely committed to the club. Maybe in the first year he didn’t know a lot about it. He came from Real Madrid and he didn’t know how long and whether it would work for him, whether he would enjoy it or not,” Wenger said.

“I believe now he is completely on board, committed and focused on the results of the club.”

Arsenal have no fresh injury worries, although they remain without Jack Wilshere (leg), Danny Welbeck (knee) and Tomas Rosicky (both knee).

Liverpool can land a psychological blow with victory at the Emirates, according to manager Brendan Rodgers.

The Reds travel to the capital for an early meeting with another side who have top-four aspirations this season aiming to continue their bright start after back-to-back 1-0 victories over Stoke and Bournemouth.

Rodgers admits the result is unlikely to have too much impact on the final standings at this stage, yet appreciates an away win over Wenger’s men can greatly enhance the confidence among his group.

“You’re playing one of the rivals that you’re hoping to be competing with at the top end of the table; these games are important,” Rodgers acknowledged.

“They don’t give the full picture in terms of how it will finish up – you can draw or lose these games and still go on and achieve what you want to achieve. Of course it’s for the confidence and psychologically they are important.

“No matter when these games come in the season they are always good for the psychological effect.

“We’ve got a tough game away from home but we’ll arrive into the game with confidence. We know they’re an outstanding group of players and some quality individual players but there’s a real focus in this group for this season, a real toughness, mentally.

“We know that we’ve got that ability to scrap and fight to get a result as well as play good football. If we can go there and perform like we think we can and keep to our game-plan we’re confident we can get a result.”

Liverpool will assess the fitness of captain Jordan Henderson after he was withdrawn early in the second half of the Bournemouth game with a foot injury.

The return of midfielder Joe Allen (hamstring) remains uncertain while striker Daniel Sturridge continues to recover from hip surgery and defender Jon Flanagan (knee) is out until December.