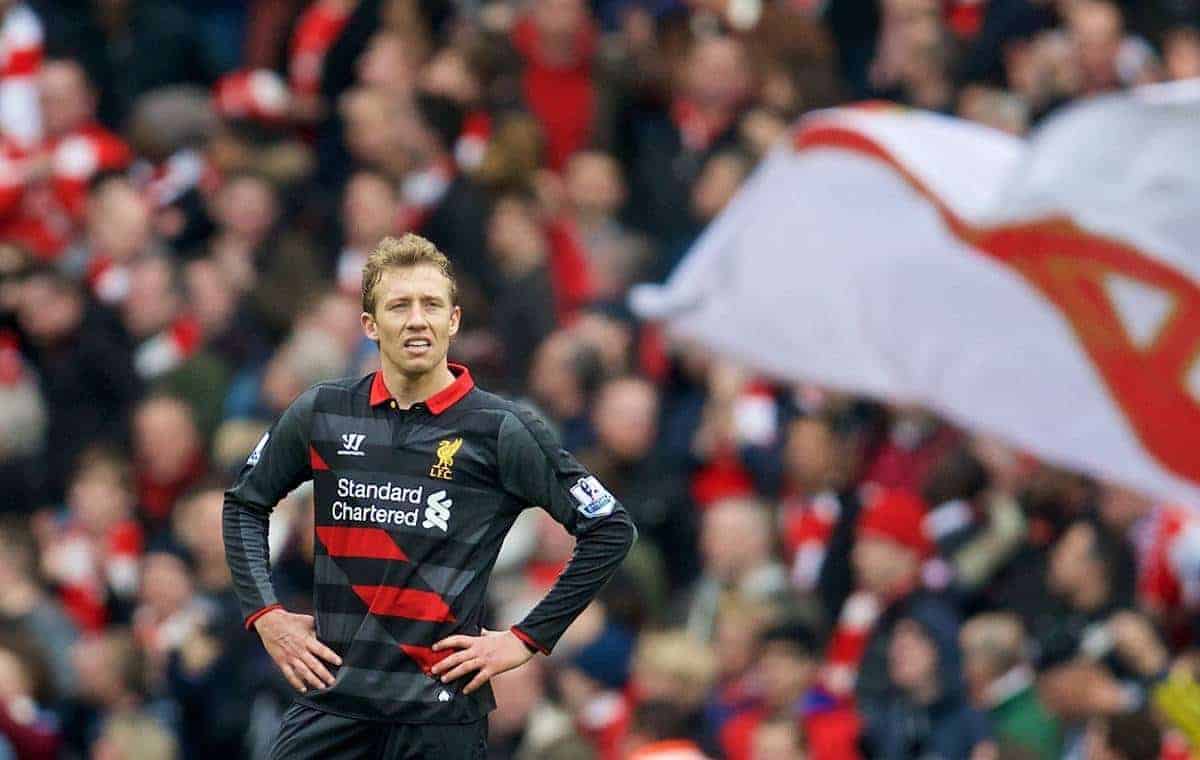 Lucas Leiva has been strongly linked with a move away from Liverpool this summer, and Jack Lusby advocates the long-serving midfielder’s departure. The likely departure of Lucas this summer will come as a blow to sections of the Liverpool support, but after eight years on Merseyside, now is the right time for the Brazilian to head for pastures new.

Lucas has been linked with a move as Brendan Rodgers’ side enters the 2015/16 campaign, following his omission from the manager’s match-day squad for the season opener away to Stoke City.

Whether suggestions of a “fall-out” are accurate or not, Lucas’ marginalisation at Anfield indicates that this juncture is the perfect time for a clean break.

Lucas leaving Liverpool will suit both parties this summer. The 28-year-old has slowly become a fans’ favourite during his time with Liverpool.

Moving from Brazilian side Gremio in 2007, in a deal worth £5 million, Lucas joined as a precocious 20-year-old, eager to make his name in one of Europe’s most competitive leagues.

“It was very hard,” he recalled in 2012. “Everyone knows that my beginning here wasn’t easy.

“I try to play with lots of intensity and strength, but without forgetting the technique I learnt in Brazil.”

That technique saw him grow up as a box-to-box midfielder, more likely to trouble the opposition’s defence than support his own.

But it was in defensive midfield that Lucas made his name on Merseyside—”a way for me to feel more comfortable,” he attests.

This didn’t stop him from becoming the first Brazilian to score for Liverpool when his 25-yard strike soared beyond Kevin Scriven and into the Havant & Waterlooville to help the Reds to a 5-2 win in the 2007/08 FA Cup fourth round.

In 275 appearances for Liverpool, however, Lucas has scored just five more goals—he is very much a defensive midfielder, and that has perhaps held him back under the likes of Rodgers and Rafa Benitez.

Lucas is a limited player: a tough tackler and a diligent defensive shield, but lacking dynamism in the deep-lying role.

He plays with passion and that, along with his infectious personality and dressing-room influence, has made him a popular character for supporters and players alike.

But in modern, top-level football this must be paired with technique.

He is no Javier Mascherano, and he is no Emre Can.

As Rodgers enters his fourth campaign as Liverpool manager, it is clear that this is the calibre of midfielder he wants to shield his back four.

“Can is viewed as being very capable of playing that holding role,” the Liverpool Echo‘s James Pearce declared at the beginning of August.

He later added: “Rodgers in his time at Liverpool has never really gone in for the archetypal defensive midfielder.”

Can, signed for £10 million last summer, is a different entity to Lucas.

At just 21 years old, he possesses the raw potential to develop into one of the world’s best midfielders, but also the immediate ability to perform both as a box-to-box midfielder or—as Rodgers believes—a holding option.

The German is a comfortable amalgamation of a 20-year-old Lucas and that of today—except he isn’t plagued with injury.

Lucas’ downfall will largely be attributed to his many injury issues, and that has seen him fall from one of the Premier League‘s finest defensive midfielders, under Benitez, to an expendable option. As Rodgers assessed his strongest midfield options this summer, Lucas will have been towards the bottom of the list: Can, James Milner, Jordan Henderson, Philippe Coutinho and Joe Allen point towards a more progressive future for the Reds in the middle of the park.

There is a convincing argument to suggest that Lucas—as Liverpool’s only specialist defensive midfielder—should remain within Rodgers’ ranks.

But, as Pearce attests, a destroyer-type has never been in the manager’s tactical remit.

The player that was awarded Liverpool’s Player of the Year award for the 2010/11 season is no more.

Detached from romance and sentimentality, now is the right time for Lucas to leave—but where could he go this summer?

Last season, Lucas was blocked from joining both Napoli (season-long loan) and Inter Milan (January transfer), and a new home in Serie A may be the most sensible option for the midfielder.

The Italian league is renowned for its slower pace, with more emphasis on a tactical, defensive game.

The Brazilian would likely thrive in Serie A, but what about elsewhere?

West Ham United are one of the clubs to have reportedly expressed interest in signing Lucas this summer, with a proposed deal to sign free agent Joey Barton falling through.

This raises the question of whether the Liverpool man could excel elsewhere in the Premier League. When he was utilised by Rodgers in 2014/15, Lucas still performed to a high standard—he was a key feature as the manager looked to stabilise his side towards the end of 2014.

His physicality and composure does suit the intensity of the league, and Lucas would significantly bolster the starting lineups of West Bromwich Albion, Stoke City, Sunderland, Watford and the Hammers.

It would not be remiss, either, to suggest he could play a key role at the top end of Ligue 1, or at any La Liga club beyond their top three of Barcelona, Real Madrid and Atletico Madrid.

He should not be short of options this summer.

Lucas is far from over the hill, but with Liverpool moving in a different, more dynamic direction this season, he would be right to leave in search of first-team football.