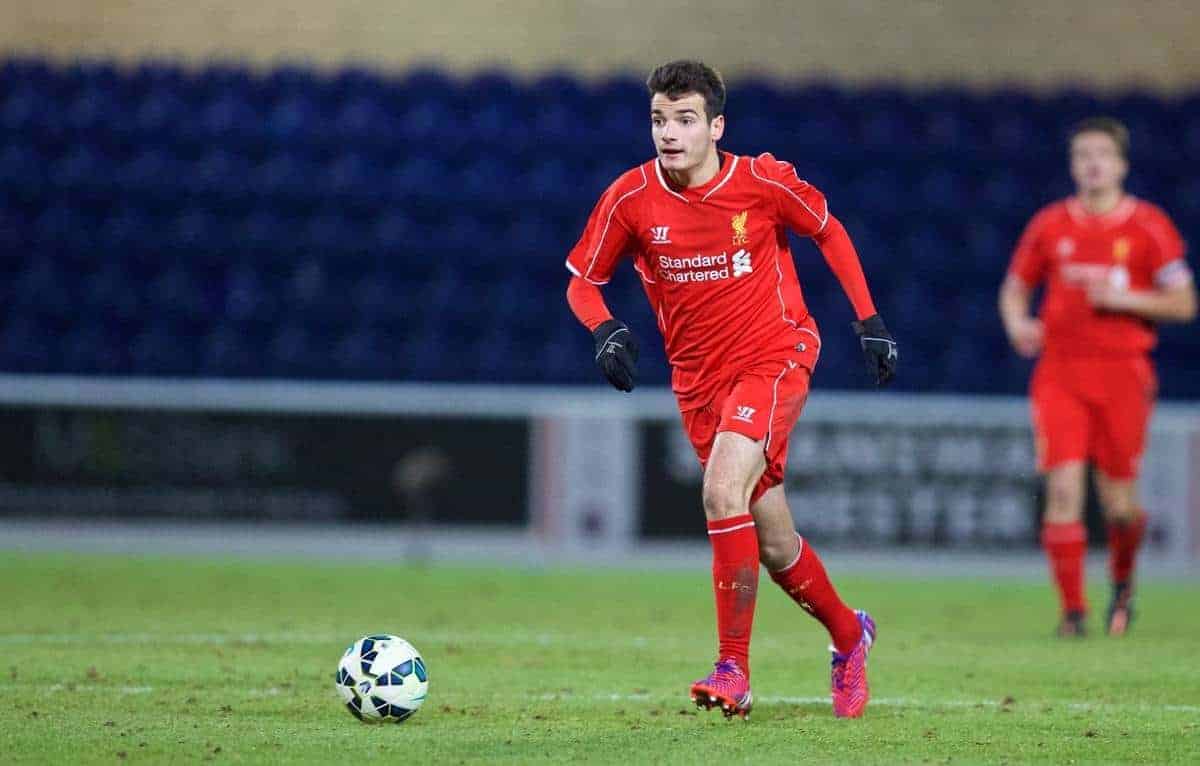 One of the stars of Liverpool’s impressive academy setup, Pedro Chirivella seems destined for success. Jack Lusby profiles the Spaniard. Jordan Rossiter may be the first name to spring to mind as the next potential star to rise from the Liverpool youth-team ranks, but Spanish midfielder Chirivella may just eclipse the young Scouser.

With Reds manager Brendan Rodgers a strong advocate of youth development and supplementing his first team with players from the academy, Chirivella stands a strong chance of success at Anfield.

But just who is Chirivella, and could he make the step up at Liverpool? Chirivella joined Liverpool from La Liga outfit Valencia in the summer of 2013.

The then-16-year-old signed a long-term deal, setting him up for progress through the youth ranks and into Rodgers’ first team.

The club moved to aid the Spaniard’s transition in Liverpool by accommodating his family, as well as providing them with work.

Having enhanced his reputation as a burgeoning talent with Valencia, Chrivella reportedly turned down a move to Barcelona in 2011—such is his talent and high-end potential, the midfielder was coveted as a crucial member of the Catalan club’s La Masia setup.

Barcelona duo Xavi and Andres Iniesta are also clear inspirations for the 18-year-old, who has acclimatised well at the Liverpool academy’s Kirkby facility—saying all the right things, he also cited former Reds midfielder Xabi Alonso as a key influence in 2014.

He swiftly established himself within Liverpool’s youth sides, captaining the Reds in 2013’s Milk Cup.

In 2014/15, Chirivella made seven appearances for the Under-21s in the Premier League and a further five as the young Reds battled in the UEFA Youth League. However, his campaign was curtailed by several injuries.

Chirivella will be hoping to put these issues behind him as he builds towards a first-team role on Merseyside. An archetypal No.6, Chirivella regularly plays at the base of the midfield for Liverpool’s U21s, breaking up play with intelligent movement and maintaining possession with a composure beyond his years.

He will rarely score or assist, but that is beyond his remit as a deep-lying playmaker; though it must be stressed, he is not a tackle-happy midfielder like Lucas Leiva.

Instead, like Busquets, he is the U21s’ safety blanket: a player that links the rest of the team together.

“I’m a player who can pass the ball really [well], and can read the game,” Chirivella said in 2014, outlining his attributes to The Redmen TV’s Paul Machin.

“The thing I have to improve is [my physicality].”

As the player himself alludes, he is relatively slight. At 5’10” and with a lean frame, Chirivella will need to bulk up before he can truly break out into the Liverpool first team.

Furthermore, as his time with the Reds so far has been peppered with injury problems, this will also require monitoring.

Nevertheless, Chirivella’s quality—in understanding space both on and off the ball, maintaining possession with short passes and prompting attacks with long balls—has pushed him into Rodgers’ thinking.

“Every time I go [to Melwood] and train, he is always very good with me,” Chirivella continued to tell Machin on his relationship with the manager.

“He always asks how I am here in England, how I am doing.

“It’s very good for the young players to come to Melwood and feel at home.”

Not content with calling Chirivella up for regular training sessions at Melwood, however, Rodgers saw fit to include the Spaniard—along with a clutch of other bright academy talents such as Rossiter and left-back Joe Maguire—in his squad for the Reds’ pre-season tour of the Far East and Australia.

His first taste of senior action with Liverpool, Chirivella’s second-half substitute’s appearance against HJK Helsinki on the Reds’ return from tour saw him impress further.

In a short, 10-minute display, Chirivella looked comfortable alongside his more experienced team-mates, offering a consistent outlet off the ball and recycling possession assuredly.

This performance saw him pair his raw qualities with a comfortability on a more demanding stage.

But, given this was a mere pre-season encounter, can Chirivella translate this ability and make an impact on the Liverpool first team in the future?

Can Chirivella Make an Impact at Liverpool? “In very little time we will see Pedro Chirivella, Sergi Canos or Madger in the first team, and some of them playing regularly,” said Liverpool’s chief Spanish scout, David Vizcaino, earlier in 2015.

“Chirivella is football, he is intelligence, control, technique, personality. I expect great things from him.”

Vizcaino’s gushing praise should underline one thing: if Chirivella follows the trajectory that his potential has set out, he will be a key player for Liverpool in the future.

That Rodgers included the midfielder in his squad for Liverpool’s pre-season tour suggests he also sees a future for Chirivella at the club.

“It’s something I will never forget,” Chirivella declared on his return.

“I went with the first team and made my first-team debut with all of the players. It was really nice and I won’t forget it.”

Opportunities may be scant in the 2015/16 season, with the likes of James Milner, Jordan Henderson and Emre Can firm fixtures in Rodgers’ starting lineup, while Rossiter and Joe Allen will serve as backup.

But there may well be a route into Rodgers’ first-team thinking by impressing in domestic cup competitions and, as ever, for the U21s.

Whether he will develop into the next Alonso remains to be seen, but Chirivella certainly has the talent to do so.