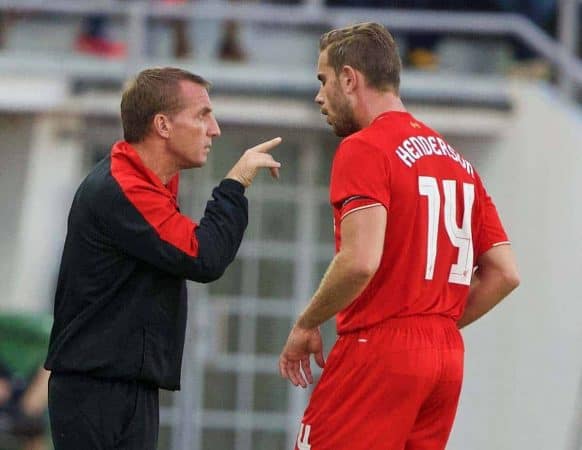 With an unforgiving start to the season, Andrew Ronan urges Brendan Rodgers to pick a consistent side and formation to help Liverpool through the tough fixtures.

Sometimes the build-up to the start of a new season can drag on and on, especially during a summer absent of any top class football. The upcoming season, however, has sneaked up very quickly – so quick that Sky Sports haven’t even had time to bore us all to tears with their hype machine (although they are giving it a fair go by ramming that Thierry Henry ad down our throats).

When Brendan Rodgers and his charges return to the Britannia Stadium to take on Stoke City this Sunday, only 77 days will have passed since that infamous defeat at the hands of Mark Hughes’ men. The utter shame of that performance, coupled with the Raheem Sterling standoff, topped what was a season to forget. No less for Brendan Rodgers, whose job was hanging in the balance.

A period of rumour, speculation and pro-Klopp rhetoric ensued before FSG opened their cheque book and braced themselves for another summer of shopping.

Before the real money was handed over, and while the ire of supporters far and wide was still at its worst, in came James Milner on a free transfer. Although widely acknowledged as a seasoned and reliable player, Milner’s signing did little to comfort the masses. Nor did the arrivals of Danny Ings, Adam Bogdan and Joe Gomez.

Where were the marquee signings that Rodgers talked about near the end of last season? Rumours of Benzema, Cavani and Lacazette kept some fans living in hope, but hope was all it was, and many feared a repeat of last summer’s transfer splurge which saw quantity taking preference over quality.

Then the quick acquisitions of Roberto Firmino and Nathaniel Clyne injected some optimism with the new season drawing nearer. Now, the arrival of Christian Benteke, whilst divisive, has actually made the upcoming season one to look forward to.

The prospect of a new season can make supporters of even the most humdrum clubs brim with enthusiasm. It’s perhaps one of the best things about supporting a club through thick and thin; that sense of belief that this can be the season when something good is achieved. For most clubs, a hammering in the first few games can bring its supporters back to reality.

On the other hand, a few wins in the opening games allows that enthusiasm to stick around a while longer. How long, though, will any enthusiasm last for Liverpool supporters given the teams Rodgers and his men take on in their first seven away fixtures?

The prospect of trips to Stoke, Arsenal, Man Utd, Everton, Tottenham, Chelsea and Man City before we even hit December is an unenviable one. Sure, they all have to be played at some point, and yes, it may be better to play them early on before they’re in full stride.

Given that Liverpool usually make average starts to the season, though, those seven games could prove to have a huge say in the Reds season. Those seven games mean that Brendan Rodgers will have no time to spare in integrating his new additions to his current crop. There can be no passengers when you go to Old Trafford, the Emirates and Stamford Bridge.

SEE ALSO: Liverpool’s recent record shows the importance of a good start to the season

In particular, Benteke, Clyne, Firmino and Milner will all have to hit the ground running. Rodgers, too, needs to be decisive. This week he hinted that he’s still undecided on whether to pair Dejan Lovren or Mamadou Sakho alongside Martin Skrtel at the heart of defence. He has many options and possible pairings in midfield, too. The sooner the better, though, he decides what his ideal midfield is – and his forward line for that matter.

Too often last season he tinkered with formations and systems; players came in and out and rhythm went missing. A consistency is needed from the get-go this season when it comes to a formation, way of playing, and player selection.

Obviously some competitions will take preference over others when it comes to player selection, and because he has a large squad (with many up and coming young talents) hopefully Rodgers settles on a first 11 for the league. There will be enough cup games and Europa League games for the players who may be overlooked for the big league matches. [td_ad_box spot_id=“custom_ad_3″]

Getting through those tough first seven away league games (and not to mention our home games) is the main problem facing the boss. A decent points return from those games going into the busy Christmas period may prove to be the catalyst in the race for a top four spot – especially since Decembers fixture’s aren’t too taxing.

All we have is hope, though, as the always pleasant trip to the Britannia draws nearer. Let’s just pray that Rodgers has his men primed and poised for what will be an unforgiving start to the season.