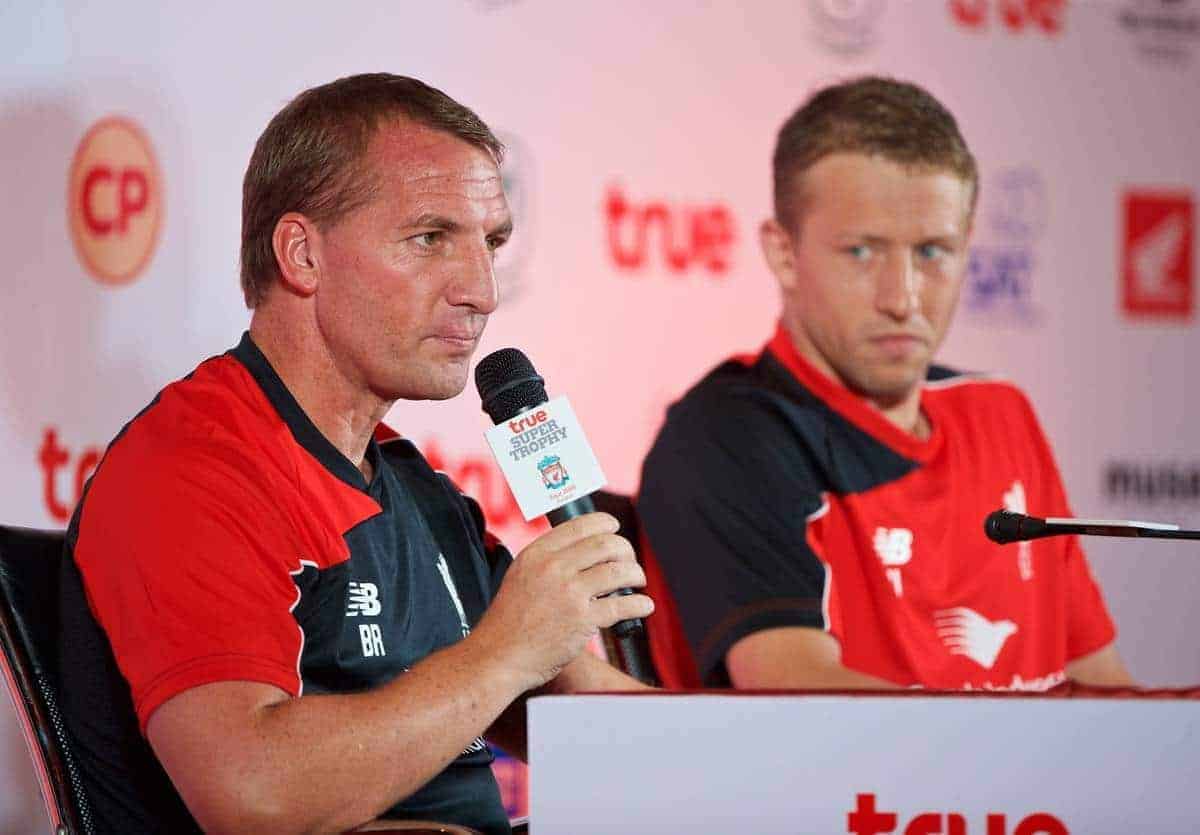 Following his omission from the match-day squad for Liverpool’s 1-0 win over Stoke City on Sunday, reports suggest Lucas Leiva could be sold this summer. Not involved as Liverpool defeated Stoke City 1-0 on the opening weekend of the 2015/16 Premier League season, Brazilian midfielder Lucas Leiva could now be sold after a “fall-out” on Merseyside.

According to the Express‘ Paul Joyce, the 28-year-old’s absence was not just a tactical decision from manager Brendan Rodgers.

Buried within Joyce’s post-match report, he hints towards a summer exit for Lucas.

“Another concern centres on Liverpool’s strength in depth in midfield with Lucas left out of the squad entirely following a fall-out which presumably now promotes the prospect of a parting,” Joyce writes.

“He would need replacing.”

Lucas has found himself on the fringes of Rodgers’ first-team squad since his takeover in 2012, and is persistently linked with a move to Serie A, with both Inter Milan and Napoli regularly reported suitors.

At the Britannia Stadium on Sunday, Rodgers fielded a two-man midfield base of James Milner and Jordan Henderson, before introducing Emre Can to great effect after the hour mark.

This indicates that Lucas will again not feature in his first-choice starting lineup this term.

Lucas joined Liverpool from Brazilian side Gremio in 2007, in a deal worth £5 million.

The tough-tackling defensive midfielder has gone on to make 275 appearances for the Reds, but after suffering a series of debilitating injuries has seen his contribution depreciate.

He made 20 Premier League appearances for Rodgers’ side last season.

At the end of the 2014/15 campaign, Lucas was rumoured to be heading for the Anfield exit in a report which suggested he had fallen behind Welsh midfielder Joe Allen in the pecking order.

“The Anfield boss feels he would have enough central midfield options in [James] Milner, Allen, Jordan Henderson and Emre Can if Lucas went.”

Selling Lucas would leave Liverpool light in terms of defensive midfielders, however.

As Joyce notes replacing him would be hugely important for Rodgers this summer.