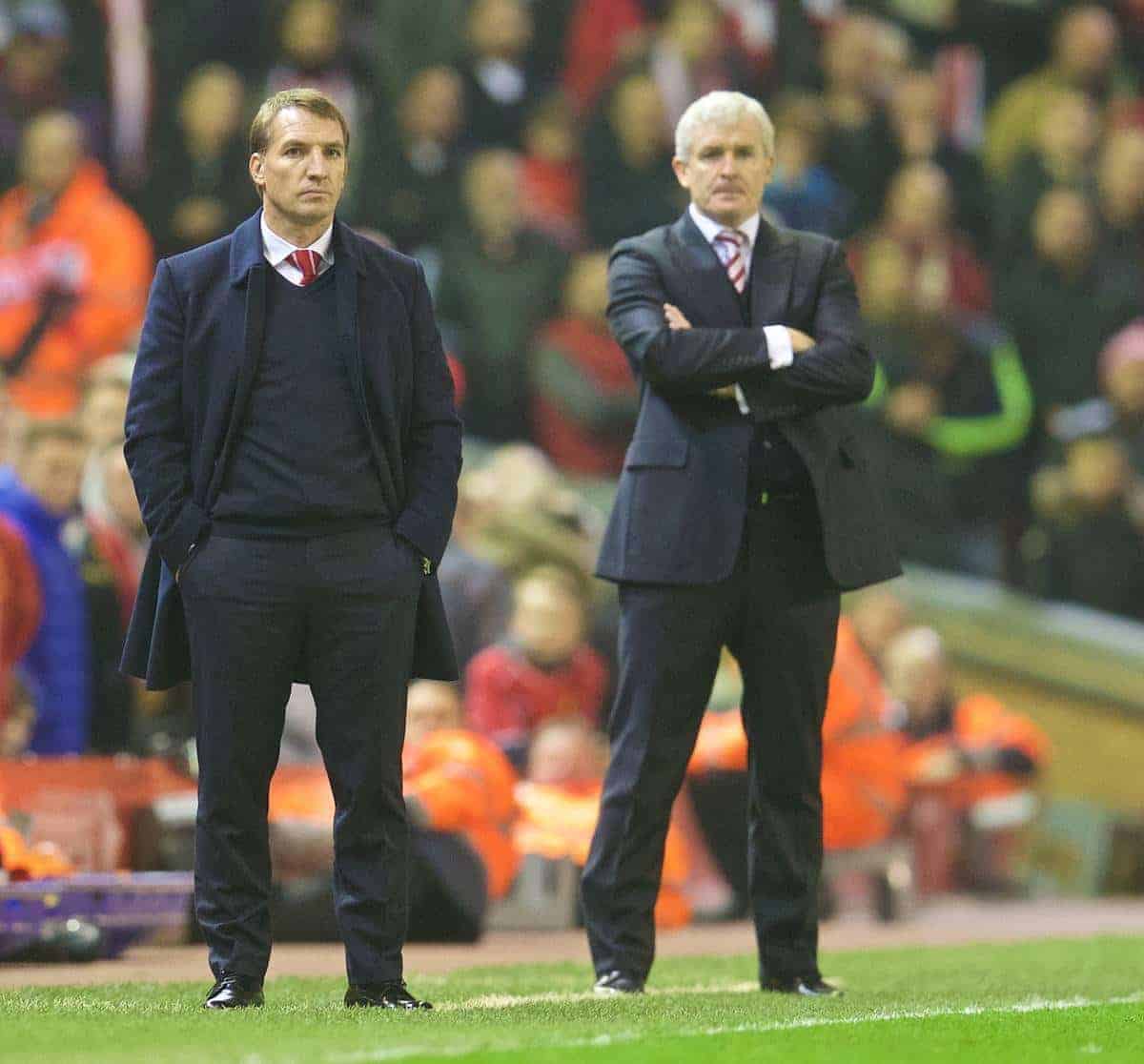 Stoke boss Mark Hughes is braced for a Liverpool backlash at the Britannia Stadium as Brendan Rodgers’ men make an immediate return to the venue of one of their most embarrassing defeats.

Rodgers’ side return to the Potteries this Sunday just three months on from their 6-1 capitulation on the final day of the 2014-15 season, a loss which rounded off a dismal run-in for the five-time European Cup winners.

New Liverpool captain Jordan Henderson recently revealed he is still haunted by the memories of the club’s heaviest reverse in 52 years, but they will get a chance to exact a measure of revenge in their first contest of the new campaign.

Hughes acknowledges lightning is unlikely to strike twice when they host Rodgers’ new-look outfit again and believes the thrashing they administered will serve as motivation.

“I don’t think there’s too many of us that feel what happened in that game will be repeated,” the Welshman said. “We’d like to think it would be but Liverpool will have a lot to say about it.

“At the beginning of the season expectations are always high for everybody and no less so from a club the stature of Liverpool.

“They’ll be wanting to address that, it was certainly a blot on their copybook.

“I’ve heard their players talk about how they want to make sure that it doesn’t happen again. The reverse of that is obviously we’ll have something to say about that as well.

“We’re hoping for a positive start to what we hope is going to be a very successful season.”

Liverpool boss Rodgers has stressed lessons have been learned from the “unacceptable” previous outing at Stoke, and described Sunday’s rematch as the “perfect” opening fixture.

“I aim to never ever have anything like that again in my career,” Rodgers said. “That was my worst day in football, by a long way.

“But there were great lessons learned from that. The supporters were rightly absolutely devastated and we are determined to put things right.

“When the fixture came out (Sunday’s game), I felt we couldn’t have had a better one to be honest.

“I think lots of people looked at it wondering whether we would have been better going back later, but for me it was the perfect fixture.

“The reaction (to the loss) over the course of the summer has been terrific and it gives us real motivation now to start the season well.”

Summer recruits James Milner, Christian Benteke, Danny Ings, Roberto Firmino and Nathaniel Clyne are poised for competitive Reds debuts, while it remains to be seen whether forwards Mario Balotelli and Fabio Borini – who both look set to leave the club – are involved.

Midfielder Joe Allen (hamstring) has joined striker Daniel Sturridge (hip) and defender Jon Flanagan (knee) on the list of those missing out through injury.

Stoke will be without captain Ryan Shawcross, but striker Bojan Krkic is in line to make his first competitive appearance in seven months. Defender Marc Wilson (ankle) and winger Marko Arnautovic (thigh) are doubtful but new signing Ibrahim Afellay is expected to feature.