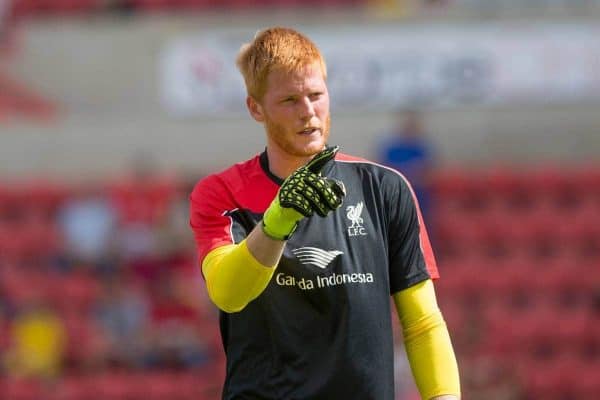 Ahead of Liverpool’s League Cup clash with Carlisle we select five players we’d like to see start the match at Anfield for Brendan Rodgers’ side.

The Reds will look to get over the disappointment of Sunday’s draw against Norwich at Anfield when the League 2 minnows come to town.

The League Cup is a competition Liverpool must see as a chance of silverware in 2015/16, with Rodgers still searching for his first trophy as manager.

There are a number of players should be given a chance to shine on Wednesday; here are five who stand out.

The Carlisle game feels like the perfect opportunity for Bogdan to make his Liverpool debut, having joined from Bolton Wanderers in the summer.

Simon Mignolet‘s form has been patchy this season – his error against Norwich on Sunday robbed the Reds of three points – and this would surely be the perfect chance for Rodgers to allow Bogdan to show what he is made of.

The 27-year-old must be itching to take to the Anfield turf for the first time, and playing him in a relatively low-key match should benefit the Hungary international, rather than throw him in at the deep end.

A strong, commanding performance may just give Rodgers something to think about, with Liverpool’s Premier League clash with Aston Villa on the horizon.

One of the most pleasing things to take from the 1-1 draw with Bordeaux in the Europa League last Thursday was the performance of Rossiter.

The 18-year-old midfielder looks to be maturing as a player, and his English bite in the middle of the park helps give Liverpool an extra edge. He must start against Carlisle.

With Lucas Leiva and James Milner unlikely to both feature – Milner could certainly do with a rest – and captain Jordan Henderson out injured, Rossiter could thrive with more responsibility against the League 2 outfit.

Rodgers has shown in the past that he will pick young players on merit, and there is no reason why a good performance can’t put Rossiter in contention for Villa at home this weekend.

One of the biggest disappointments of the season so far has been the form of Jordon Ibe.

Big things were expected of the 19-year-old in 2015/16, but he has looked way off the pace and has seemingly struggled to fill the void left by Raheem Sterling.

Wednesday evening provides Ibe with the perfect opportunity to find some confidence, however, with all due respect to Carlisle.

Whether it be as a right wing-back in a 3-4-2-1 formation, in place of Nathaniel Clyne, or in a front three, the teenager will fancy his chances.

The former Wycombe starlet will be playing against far inferior defenders in comparison to the Premier League, and a sparkling display would be just what the doctor ordered.

Roberto Firmino has, so far, been a classic example of a foreign player struggling to get to grips with the pace and power of English football.

The Brazilian is taking baby steps in that respect, but like Ibe, the Carlisle game is perfect in terms of being a potential confidence-booster for him.

It makes sense for Firmino to slot into a ‘number 10’ role in place of compatriot Philippe Coutinho; a position where he thrived with former club Hoffenheim.

You feel that the 23-year-old just needs a goal or two to become a real force at Anfield, and Wednesday represents a great opportunity in that respect.

The biggest positive to take from the draw with Norwich was the excellent second-half performance of Danny Ings.

The 23-year-old was terrific having replaced Christian Benteke at half-time, scoring Liverpool’s goal and generally adding a spark to his side. It would be madness for Rodgers not to start him against Carlisle.

Strikers are bigger confidence players than anyone, and if Ings can find the net again on Wednesday, his self-esteem will continue to rise.

Benteke looks set for a spell on the sidelines with a hamstring injury, which means having an in-form Ings available could be invaluable.

The ex-Burnley man’s all-round attitude against Norwich has made him a crowd favourite at Anfield; don’t bet against his stock rising further in midweek.

OPINION: Liverpool vs Carlisle: The Biggest Game of Someone’s Life