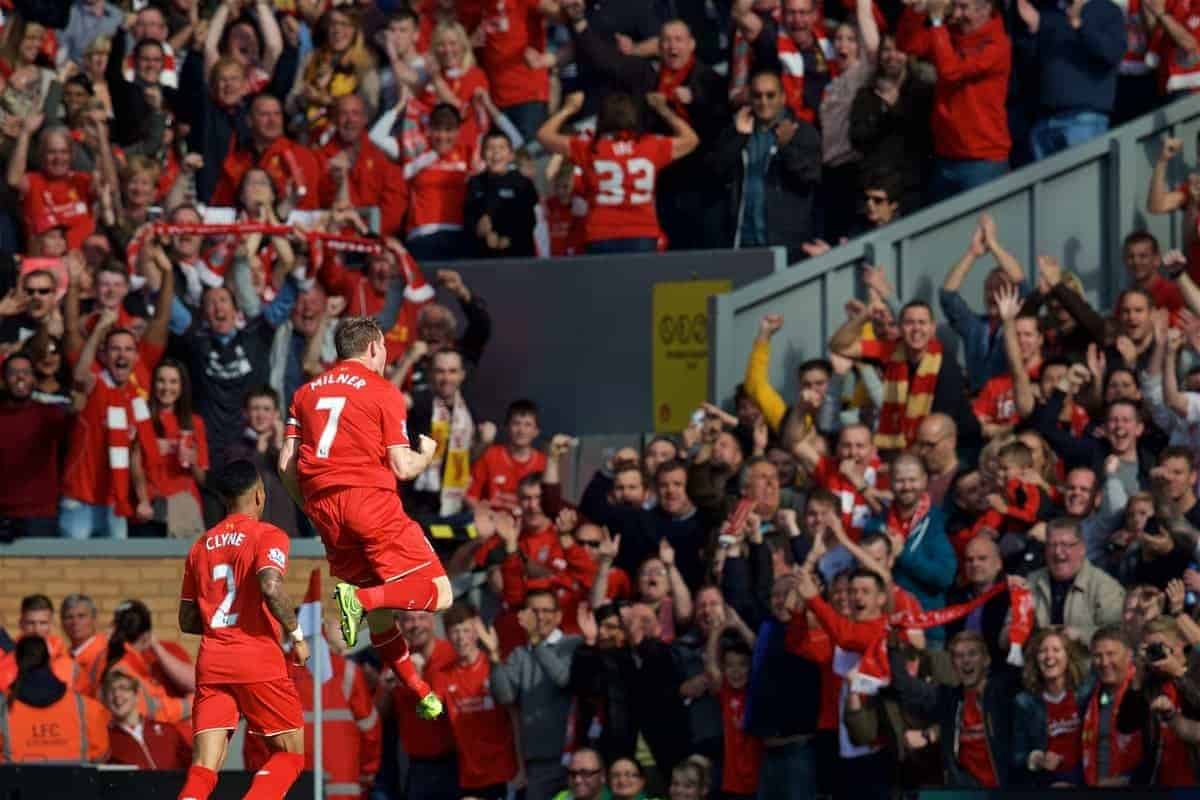 Tactical adjustments in midfield and resulting dominant display set the Reds on their way to victory on an afternoon of huge pressure at Anfield. Daniel Sturridge will rightly receive the plaudits for his match-winning brace at Anfield, but the improved balance and display of the Reds’ midfield provided the catalyst for a much needed win.

Though continuing with the a three-man defence, the set-up deployed by Brendan Rodgers with his central midfield made for a wholly improved and controlled display on an afternoon that saw the Northern Irishman survive to fight another day.

The excellent Lucas Leiva was again deployed in his anchoring midfield role but the experienced Brazilian benefitted from the slightly withdrawn and wider stationed Philippe Coutinho, and the more advanced James Milner, who played alongside the 23-year-old to form a 1-2 set-up, as shown below.

The positional tweaks handed the Reds a much better shape – one that helped provide the return of cutting edge to an all too regularly blunt side.

Utilising Milner in tandem with Coutinho, rather than flat alongside the defensively focussed Lucas, proved an excellent move from the Liverpool boss, with the stand-in skipper able to share the onus of breaking Villa’s deep-lying defensive banks of nine to supply strike duo, Ings and Sturridge.

Having a supporting body working with the Brazil international gave the negative visitors an unexpected problem with a second offensive creator – rather than being able to concentrate simply on nullifying chief-creator, Coutinho, who has been struggling with the weight of carrying the burden, shown by some indifferent recent displays.

And the rewards for the attack-minded adjustment were instant, with Milner enjoying an immediate impact on the game – and far better influence on proceedings overall – as he found the net after just 66 seconds with a superb strike that ultimately came as a result of his more advanced positioning.

As the patient Moreno opted not to whip in a hopeful cross – instead intelligently recycling possession – the vice-captain was then found by a fantastic ball from Coutinho, slid between lines, just as he began to drift outwards and escape the attentions of the Villa backline.

The movement off the top line into space allowed for Milner to smash past Brad Guzan for his first goal for the club, after an excellent first touch as he back-peddled sat the ball up perfectly to unleash a crisp strike that raised a relieved Anfield to its feet.

.@LFC definitely benefiting from having Milner playing higher up the pitch.

But as Liverpool struggled to build on the positive start, the dynamic duo were both disciplined in their designated duties of tucking alongside Lucas when needing to defend, and Villa were limited in their ability to create a single meaningful chance as the pair pressed effectively when required.

In possession, having the Brazilian magician and Captain ahead and either side handed Lucas better options off the ball for him to play to.

With Ings and Sturridge operating alternately in offering themselves for a ball to feet too, making for plenty of forward movement, Liverpool’s intricate attacking play made an overdue comeback.

At the same time, the possibility of line-breaking running opened up, and Milner took advantage forcing his way in behind Villa’s left side numerous times, with both Nathaniel Clyne and Emre Can willingly supplying the energetic midfielder.

Being stationed advanced helped make penetrative running easier, rather than breaking from a flat midfield position with more ground to cover, and the dominant performance from Lucas also provided the stability for Milner to do so – with the ex-Man City man safe in the knowledge his Brazilian team-mate would hold ground.

These features contributed to Liverpool enjoying complete control of the game, bossing the midfield battle, and it was the advancement of Milner into an area usually filled by Coutinho that created the platform for Sturridge’s stunning first of the afternoon.

Arriving into a position between numerous static Villains, Coutinho’s ball inside to the unmarked Miilner drew the attentions of the disjointed visitors defence.

Sturridge, in turn, took full advantage of the space and a free run afforded to volley home superbly from a perfectly weighted reverse lob over from the first goal-scorer in front of the joyous Kop.

The Reds looked confident thereafter as intensity increased, with Rodgers’ men visibly boosted by shaking off the lingering, unwanted stat of having not scored twice in a match since beating QPR 2-1 at Anfield in May of last season.

Milner’s energy, allowed for by the controlling Lucas, enabled for the ex-Villa man to apply relentless pressure to his former side who constantly panicked with the ball at the back, which the Reds benefitted from but couldn’t quite punish with Ings and Sturridge both squandering opportunities to increase the lead.

Though Rodgers’ side suffered a quick set-back from Rudy Gestede’s tap-in after a communication breakdown between Simon Mignolet and Mamadou Sakho, there was a persistent desire to remain on the front foot.

Some delightful, interchanging attacking play returned with the injection of confidence – all helped by central drive, creation and positional alterations.

It was displayed to perfect measure for what proved to be the match-winner, with a sublime one-two exchange between Coutinho and Sturridge allowing for the sharpening 25-year-old to slot home his second of the day like he had never been away.

Gestede replied again with a powerful header, before the Reds could, and should have added to their lead with only two excellent saves from Guzan preventing the score-line looking more handsome.

But despite Gestede’s efforts, three goals courtesy of Milner and Sturridge proved to be enough on an afternoon that a tactical midfield switch from Rodgers could well have kept him in the Anfield hot-seat.