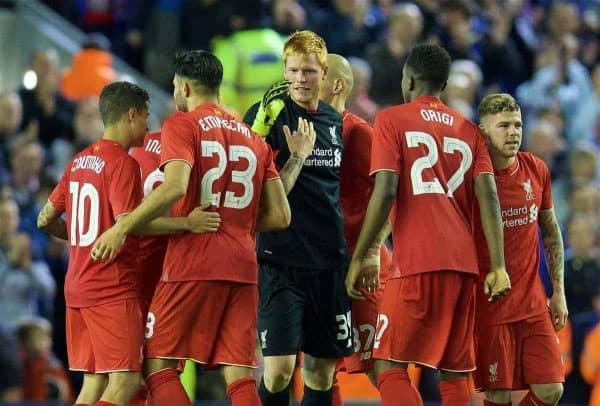 Liverpool beat Carlisle 3-2 on penalties in the League Cup third round on Wednesday night, but it was an extremely poor night on Merseyside.

There were six changes to the side that drew 1-1 with Norwich City on Sunday, as Brendan Rodgers rung the changes.

Adam Bogdan made his debut in goal, while Joe Allen returned after a spell on the sidelines. There were also starts for Dejan Lovren, Adam Lallana, Roberto Firmino and Danny Ings.

It was a surprisingly strong team; perhaps highlighting how under pressure Rodgers is right now.

Gillespie also saved comfortably from Alberto Moreno and well from Milner and Ings, as Liverpool’s ferocious start to proceedings continued.

The 23-year-old put Liverpool ahead in the 24th minute, however, heading home from close-range after a superb cross by Adam Lallana. The dominance had paid off.

Asamoah levelled seconds later to stun the home crowd, with the Ghanaian finishing clinically in front of the Kop. Was it to be another long Anfield night?

Divock Origi replaced the injured Firmino just before the break, as Carlisle enjoyed the better of things until the half-time whistle blew.

Liverpool started the second-half on the front foot, as Rodgers looked to avoid a potentially fatal result. Origi was denied a soft-looking penalty, and also forced the impressive Gillespie into a smart save.

Ings fired into the side-netting after 52 minutes, while Lovren’s 40-year effort perhaps showed that things were starting to get a little desperate for the Reds.

Talisman Philippe Coutinho replaced Allen midway through the second-half, as Liverpool looked to break down their stubborn opponents.

It all went a bit quiet in terms of chances, as extra-time began to look increasingly likely. A long-range Coutinho effort was about as good as it got.

An extra 30 minutes was rather depressingly called for.

Milner hit the post and Origi then fired over, as Liverpool desperately searched for a winner in the first period. The Belgian almost squeezed a shot in at the near post just before half-time.

The second period was similarly lacking in entertainment. Ings shot over when in a great position, while Emre Can couldn’t keep a long-range down either.

It would be a penalties that would decide who progressed to the fourth round.

Liverpool scraped through 3-2 in the shootout, following three Bogdan saves- Milner, Can and Ings scored for the Reds, Lallana and Coutinho missed- but it was a far from satisfactory night.

Surely this was the night when FSG lost faith in Rodgers.