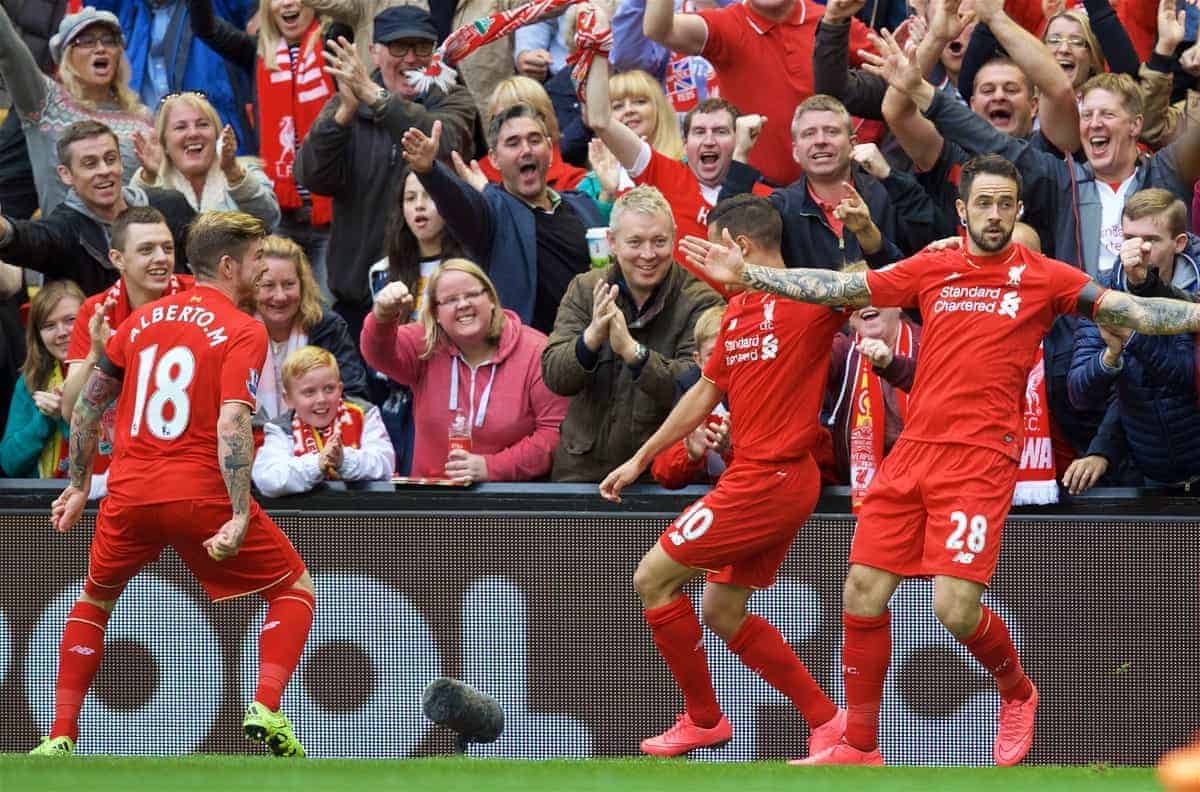 Following’s Liverpool 1-1 draw against Norwich at Anfield on Sunday, Henry Jackson provides his player ratings for the game. Mignolet could arguably have done a bit better for Russell Martin’s well-taken equaliser, but he did make a terrific stop to prevent Matt Jarvis winning it for Norwich.

There was always a slightly nervous air about the 27-year-old, and one sloppy kick into touch in the first-half summed up his lack of quality on the ball.

Not Clyne’s best performance since joining the club, didn’t offer as much as you would hope from the more advanced wing-back role. Perhaps an unfamiliar role for him.

The 30-year-old produced a good performance, following some below-par displays this season.

Skrtel looks so much happier in a back-three, and his aerial presence and reading of play was impressive throughout.

Once again Sakho was one of his side’s standout players, producing an excellent all-round performance.

His use of the ball was typically superb, and he was dominant in most facets of his game. How on earth has Brendan Rodgers not been playing him?

Did make a mistake to let Norwich in though during the second half.

Moreno was one who really stood out at Anfield, and he added an extra dimension to Liverpool’s attacking game.

The young Spaniard got forward time and time again, and while his final ball can sometimes be erratic, it was invariably very good against the Canaries. Created the chances in the first half in particular and provided natural width on the left.

The Brazilian played well, and was an unlikely attacking spark at times.

He created two good opportunities in the first-half, and it was his pressing that led to Danny Ings putting the Reds ahead. Not the solution to Liverpool’s problems, but still a decent option. Unlucky to be subbed.

Can looks happier at centre-back a lot of the time, bringing the ball out from the back, and he did fairly well from start to finish.

Defensively he dealt well with Norwich‘s pacy attack, and he also looked effective when pushed into midfield late on.

James Milner's corners have made Iago Aspas look like a deadball specialist today.

You can never question Milner’s work and team ethic, but he had a very poor day at the office.

He was guilty of losing the ball a number of times, missed two decent chances and his set piece delivery was woeful. The 29-year-old’s worst performance for Liverpool so far.

Coutinho was far from his brilliant best, and proved to be one of the Reds’ more frustrating players on the day.

His decision-making was slightly off the boil, and he missed a massive chance to win it for his side when clean through. Inexcusable that he didn’t pass to Ings instead.

Considering he has missed five months of action, this was a pleasing return to action for Sturridge.

He added pace and movement to Liverpool’s game, but he squandered two good opportunities to find the back of the net. Will only improve.

The big Belgian was slightly disappointing during his 45 minutes on the pitch, lacking the movement and goal threat that Sturridge provided.

The 24-year-old was not everyone’s choice to be the Reds’ new No.9 this summer, and this was a display that will not have done him any favours. Limped off at the break.

Liverpool’s most influential player on the day. The Englishman took his goal very well, and offered passion, movement and goal threat in abundance. A really good option for Rodgers.

There were the usual tricks and flicks from the 27-year-old, but not enough substance.

Firmino looked cultured when he came on, was certainly looking to create, constantly wanting the ball and linking well with Ings. A bright point.

Although the result was poor, Rodgers should not be blamed as much as his players.

Playing a 3-4-1-2 brought the best out of the likes of Skrtel, Moreno and Ings, and there was enough good football to merit victory.

There is a mental fragility about the team, however, which the manager has to be responsible over. That and his use, again, of three formations, in one match.

The clock is ticking for the Ulsterman.