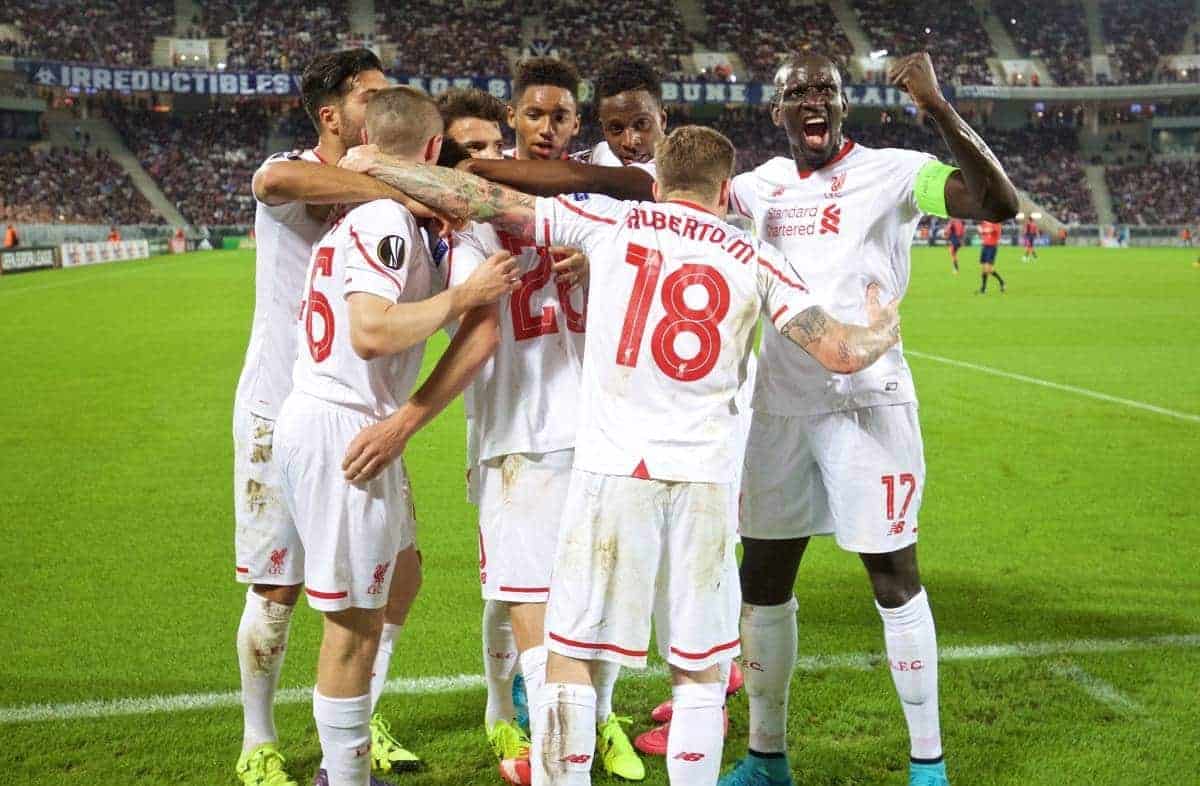 There were plenty of positives on show as Liverpool drew 1-1 with Bordeaux in Thursday’s Europa League opener, writes Jack Lusby.

Despite Liverpool’s first away trip of the 2015/16 Europa League resulting in a 1-1 draw against Bordeaux, Brendan Rodgers can draw many positives from his side’s performance at the Nouveau Stade de Bordeaux.

A moment of individual brilliance from Adam Lallana gave the Reds the lead, but Bordeaux substitute Jussie levelled late into the second half to clinch Willy Sagnol’s side a vital point.

Rodgers may have expected victory in the south of France, but can he still be happy with this result?

At this defining period of his Liverpool reign, Rodgers should cling to the many positives on show.

Playing For Your Place

It would be remiss to discuss this Europa League opener without addressing the standout performance among Rodgers’ ranks: Mamadou Sakho turned in a display of strength and composure on the left side of Liverpool’s three-man defence, despite this being his first outing of the season.

The Frenchman, replacing Dejan Lovren in the Reds’ back line and assuming the captaincy in the absence of Jordan Henderson and James Milner, exuded confidence.

Following the withdrawal of Kolo Toure through injury, Sakho took on the responsibility of marshalling defensive colleagues Joe Gomez and Emre Can, and went from strength to strength in a bullish display.

Showcasing his trademark aggressive, front-footed approach, Sakho broke up attacks with consistency and, crucially, looked to build from the back when in possession.

Sakho made three successful tackles, two interceptions, seven clearances and won four aerial duels, as well as completing more passes than any other player, with 68, including one chance created in the attacking sector.

It was a performance of sheer fortitude, and it was seemingly much needed, given the Frenchman’s peripheral role in the Premier League this season.

Rodgers praised the 25-year-old after the game, hinting at a possible starting place for Sunday’s home clash against Norwich City.

With Lovren and Martin Skrtel both in poor form in the Reds’ past two league clashes, Sakho may have secured his place in Rodgers’ first team for the foreseeable future. Similarly, Alberto Moreno will have given his manager much food for thought, with an impressively balanced display as Liverpool’s left wing-back.

After being supplanted by Gomez in Rodgers’ starting lineup for the first five games of the season, Moreno has been forced to feed off scraps in his attempt to earn a regular role in the Premier League, afforded just 59 minute over four cameo appearances.

In those four games, Moreno offered Liverpool momentum in going forward and cover for the inexperienced Gomez in defence, and the Spaniard did much the same against Bordeaux.

Fielded alongside the imperious Sakho, Moreno was given more license to probe forward, and was one of Liverpool’s most effective attacking options.

Moreno made two key passes—the joint-highest of any player, alongside Philippe Coutinho—including the assist for Lallana’s opener, and his consistent support down the left flank provided Liverpool with a useful option on the counter.

As Karl Matchett outlined prior to Thursday night’s clash, however, the 23-year-old is also much improved in his defensive efforts this campaign so far.

With Liverpool pegged back for much of the second half, Moreno was diligent in tracking back to support Sakho, making four tackles—second only to Lallana (five).

Gomez has been a revelation so far this season, but his future is not at left-back, and with Moreno producing an encouragingly well-balanced display against Bordeaux, he could join Sakho in Rodgers’ reckoning on Sunday.

The pair may also be joined by a clutch of Liverpool’s youthful contingent in time, too.

The Promise of Youth

“My approach is what I did in this competition when I first came in,” Rodgers told reporters before the game, referencing his approach to the Europa League in his first season on Merseyside in 2012/13.

“We played players who were needing games and it gives me a chance to look at some younger players and back then we finished top of the group.”

While a 1-1 draw may not have been the best step towards finishing top of the group this season, Rodgers will be pleased with the performances of some his younger players in Bordeaux.

This injection of youthful exuberance presented a major positive for Rodgers, with Gomez, Rossiter and Chirivella particularly impressive.

Gomez was initially fielded on the left side of the back three, before switching into a central sweeper role following Toure’s injury and, despite this being the former Charlton Athletic defender’s first outing in Europe, he performed with composure and intelligence.

Only Sakho (81) made more touches of the ball than the 18-year-old (78), with Gomez keeping his head up to read the game.

The £3.5 million summer signing will be disappointed with his hand in Bordeaux’s equaliser, but Gomez did little to hurt his chances of an extended role at centre-back in the Premier League.

Furthermore, ahead of Gomez in midfield, Rossiter and Chirivella fostered an impressive balance as the game played out.

Rossiter performed with tenacity in breaking up play and fearlessness in possession, displaying an impressive passing range, while Chirivella looked to add some spark to a flagging attacking midfield.

With Rodgers’ first team under scrutiny in the Premier League, the likes of Rossiter and Chirivella can be hopeful of regular action in the coming weeks.

Heading into this Europa League clash, Liverpool were in dreadful form.

A team lacking identity, Rodgers’ side were brushed aside by both West Ham United and Manchester United and, sitting 10th in the Premier League table, the pressure was mounting on the manager.

This performance, despite not producing the desired result, should provide supporters with encouragement.

But, crucially, Rodgers must now note these many positives and act on them.

Sakho should be a guaranteed starter against Norwich and beyond, with the intelligence, strength and finesse he showed on his return to France outweighing the performances of Lovren and Skrtel combined so far this season.

Moreno, too, should have played his way into Rodgers’ starting lineup after proving that he can perform as a functional left-back.

Joining them in defence should be Gomez, and his maturity at the heart of Liverpool’s back three against Bordeaux should prove to Rodgers that he is ready to partner Sakho at centre-back.

Both Rossiter and Chirivella could also put pressure on Lucas Leiva, in light of Henderson’s prolonged injury layoff, with the Brazilian lacking the vitality of the academy pair.

Rossiter in particular should be considered for a starting role against Norwich.

Most importantly, however, the improvement in Liverpool’s performance in the south of France can be attributed to a change in system.

Though three points would have been the ideal outcome from Liverpool’s Europa League opener, perhaps what will prove more important is a shift in ideals from Rodgers as a result.

The manager must take his cues from this performance and build on it in the Premier League.