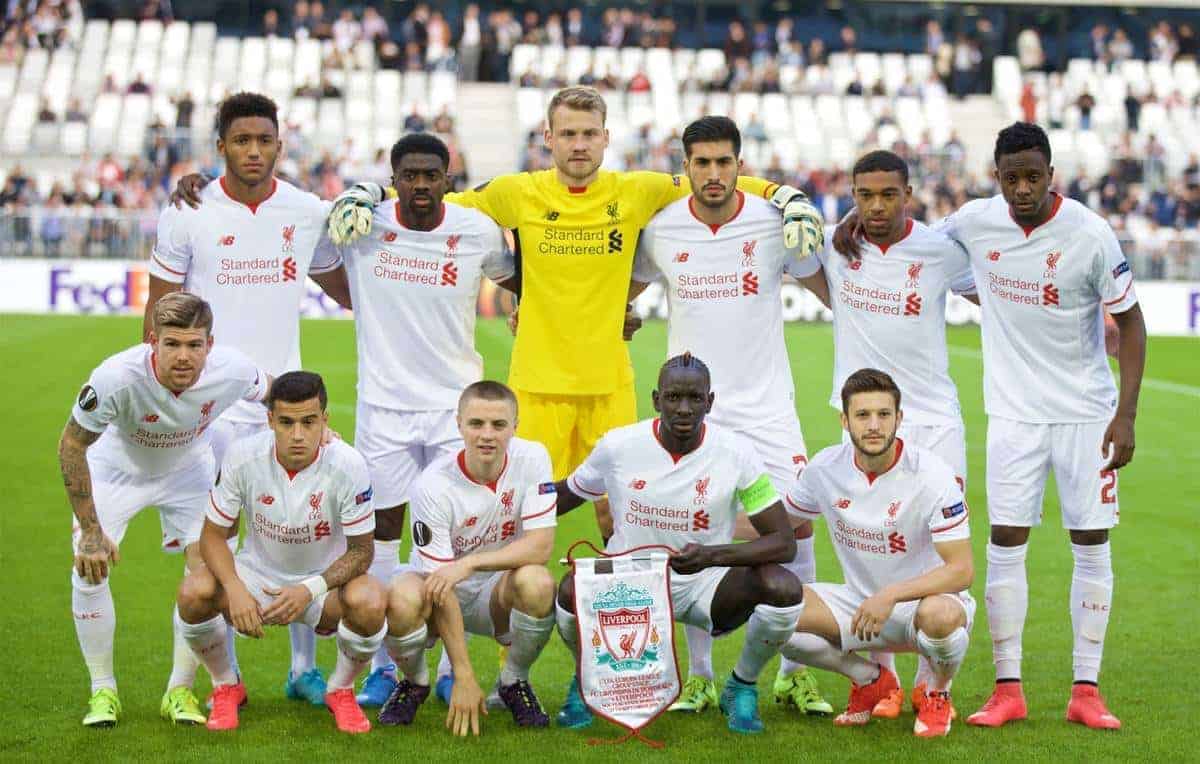 It’s the morning after Liverpool’s Europa League draw at Bordeaux, so we take a look at the best newspaper reaction from the game.

It was a match that Brendan Rodgers really could not afford to lose, and although the performance was far from great, a share of the spoils represents a decent result for the Reds.

Adam Lallana‘s lovely solo effort gave the visitors the lead, but the hosts responded through substitute Jussie with 10 minutes remaining.

There were standout performances from captain Mamadou Sakho and youngster Jordan Rossiter, although Jordon Ibe and Divock Origi had nights to forget.

There was always a feeling that Sunday’s showdown with Norwich City at Anfield would be where Rodgers will properly be judged, and it will be fascinating to see his team selection for the game.

Here is how the morning papers reacted to the draw with Bordeaux:

James Pearce of the Liverpool Echo lauded the Man of the Match display of the returning Sakho, and feels he must surely start against Norwich:

Martin Skrtel and Dejan Lovren may have been rested with one eye on that fixture but one of them will surely miss out after Sakho shone in his homeland.

The former Paris Saint Germain centre-back has waited patiently for his chance after being controversially overlooked in the opening month of the season.

In the absence of Jordan Henderson and James Milner, Sakho was handed the armband by Rodgers and he led by example throughout.

Sensing danger and dealing with it, Sakho looked like the kind of defensive leader Liverpool have been so sadly lacking so far this term.

ESPN‘s Steven Kelly also felt Sakho was the star man on the night:

Generally rock-solid, further emphasising the unfairness of his demotion from the first-choice team. Strong in the air, he also didn’t leap into tackles unless he knew he could win them. His short passing was controlled, but the occasional more ambitious pass went astray.

He provided much-needed experience for the younger players in his charge, especially after Toure’s injury. The Daily Telegraph‘s Chris Bascombe was not convinced by the performance, but believes if Rodgers wasn’t under so much pressure, we would be looking at the game in a different light:

In normal circumstances a point on the road in Europe is deemed satisfactory.

Liverpool manager Brendan Rodgers understandably claimed the opening to the Europa league campaign in Bordeaux as such, despite a lament as how his side conceded a sloppy equaliser with ten minutes left. Adam Lallana’s opening goal – beautifully crafted an finished midway through the second half – deserved to be the winner.

The trouble for Rodgers is these are uncertain times at Anfield, and for all the signs of improvement he embraced there is so much damage to be repaired he is hunting for context as much as points.

Take away what’s gone on recently and you could perceive this as a tentative step in the right direction.

The Daily Mail‘s Dominic King echoed that sentiment, stating that Rodgers will be more relieved than happy:

There were no smiles or fist pumping celebrations. The reaction in the away end was muted and the manager, after exchanging a few cursory handshakes, swiftly disappeared down the tunnel.

Happiness was not the overriding emotion for Brendan Rodgers or Liverpool’s players but there was, without question, a sense of relief; this 1-1 draw will not feature anywhere on the list of the club’s best European results but at least it afforded the manager some respite.

In his match report for the Guardian, Sachin Nakrani heaped praise on Liverpool’s youngsters, with several teenagers impressing:

Lallana’s goal aside, the most striking encouragement for Liverpool was how such a young team refused to fold against fast-paced, aggressive and skilled opponents. This was a starting XI that contained three teenagers in the 19-year-old Jordon Ibe, 18-year-old Joe Gomez and another 18-year-old, Jordan Rossiter, making only his third appearance for his boyhood club.

What appeared a gamble on the part of Brendan Rodgers then looked like suicide by a manager under pressure when on 28 minutes Liverpool’s most experienced player, Kolo Touré, had to go off with a dead leg and was replaced by another 18-year-old in the Spanish midfielder Pedro Chirivella for his first appearance.

A young team dug in, scored in style and earned a point that could prove invaluable if Liverpool are to make their mark in Europe this season. For their supporters, here as well as back home, it is a case of onwards and upwards.

The Mirror‘s David Maddock was left frustrated by the performance of Lallana, despite his well-taken goal:

Of English footballers’ there are few with the class and technique of Adam Lallana. Beautifully balanced, the former Southampton skipper has a balletic beauty about him, capable of gliding away from opponents, occasionally making it look effortless.

However, too often than not, the final act never matches the approach work. In the final 25 yards, where the real top players do their business repeatedly, Lallana too often falls down.

Tonight was looking like being another of those nights for the £25million man, until a wonderful goal of such exquisite nonchalance – nutmegging a defender before caressing his shot into the far bottom corner – handed Liverpool the win.

He was also unconvinced by Divock Origi:

The Belgian forward hasn’t seen much playing time before tonight and it’s easy to see why.

While the physical and technical attributes are certainly there – he’s rangy, quick, has a trick in his locker – there’s something missing.

There was no real purpose about anything he did, no drive nor determination when he ran channels, no decisive movement to pose questions of the opposing centre-backs in behind. Too often he wanted to show for feet – which only ate up the space Lallana and Philippe Coutinho would’ve preferred to use.

Must do more. Must show more intensity, in all aspects of his play.