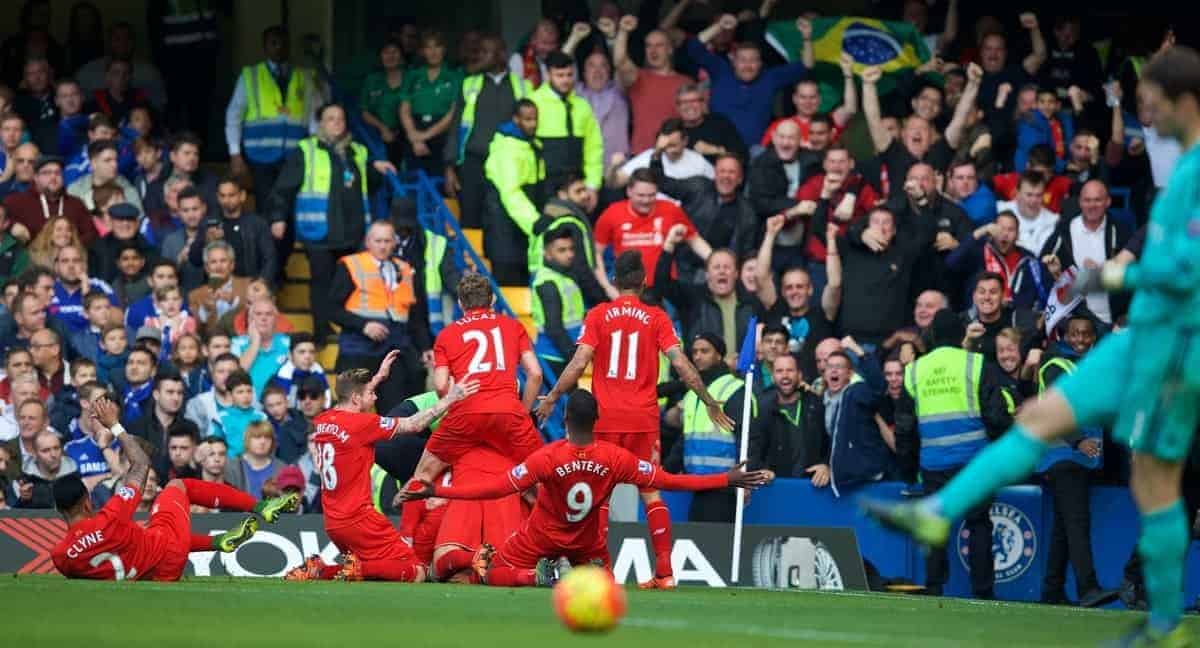 Liverpool stormed to victory at Stamford Bridge on Saturday afternoon, beating Chelsea 3-1, courtesy of a host of strong performances. Few could fault Mignolet for Ramires’ opener, with the Brazilian able to power his header home after poor marking from Alberto Moreno.

After this, Mignolet performed comfortably with little threat to his goal—with a great reflex stop to thwart an opportunistic Oscar standing out as his key contribution. Solid as usual.

In a first half where Liverpool looked to take the fight to their opponents, Clyne was the catalyst.

The right-back remained on the front foot throughout, spurring his side on with pace and tenacity in the attack. A contender for Man of the Match.

Skrtel dealt with the threat of Diego Costa well, remaining on the right side of the powerful Spaniard throughout and coping with his cynical attempts to exert his physicality.

The 30-year-old was also on hand to provide a calming influence in possession, as well as mopping up some dangerous attacking moves. Sakho receives a higher grade than his defensive partner for his ability to prompt attacks from deep—as his long-range pass to Christian Benteke for Philippe Coutinho‘s second serving as a key example of this.

At fault for Ramires’ goal, Moreno highlighted his naivety in defensive situations.

However, as Liverpool grew in confidence so did their No. 18, and Moreno supported attacks with defence-stretching pace and strong deliveries from the left flank.

Came close to replicating his first goal in a Liverpool shirt with a fine counter-attacking move, only to be deprived of a place on the scoresheet by a sprawling Asmir Begovic.

By far and away Liverpool’s worst performer on the afternoon.

Milner continued to look at odds with Jurgen Klopp‘s demanding midfield system, misjudging challenges and taking the sting out of the Reds’ attacking moves with poor touches.

Deservedly hooked early into the second half, Liverpool’s stand-in captain and highest earner was little more than a passenger once again. A major concern for Klopp.

After a first half hallmarked by turnovers and clumsy fouls, Lucas produced a stellar defensive-midfield display after the interval—though he should have been sent off for one of many late challenges on John Obi Mikel.

Continuing to thrive under his new manager. An enigma. Can contribute some strong runs from deep and imposed himself as Chelsea tried to build from the midfield, but so often got caught out of position or lost possession.

It is worth noting that Can is still only 21 years old, but the lack of tactical intelligence shown on Saturday could have been capitalised on by a better team.

Lallana started the first half as Liverpool’s brightest attacking option, getting shots off and finding dangerous positions on the edge of the Chelsea penalty area, but faded into the periphery after the interval.

A useful option for Klopp, but may find his starting role under threat after Roberto Firmino‘s bright performance.

Fielded as Klopp’s centre-forward in an experimental 4-3-3, Firmino led the line well, drifting between the lines, contributing positively in the buildup and creating space with intelligent movement.

On Benteke’s introduction, Firmino moved back into his natural No. 10 role, and continued to impress. Should be a starter from now on.

Could this be the performance that stops the rot for Coutinho, after a long run of poor form in a Liverpool shirt?

After a slow start, Coutinho grew into the game with two sensational strikes, and his confidence shone through as the Reds continued to penetrate Chelsea‘s awful back line well into stoppage time. Christian Benteke (on for Milner, 64′) – 7 – Will likely be admonished by Klopp for his poor work rate, but with a goal and an assist in less than 30 minutes, Benteke made his contribution count.

Jordon Ibe (on for Firmino, 76′) – 6 – Brought on for a flagging Firmino and immediately stretched Chelsea on the counter with his pace. Will be hoping for a starting role soon.

Dejan Lovren (on for Lallana, 90′) – N/A – Touched the ball once as Klopp trolled Chelsea with his introduction.

Would Brendan Rodgers have had the chutzpah to substitute his captain in order to introduce another centre-forward?

This was a bold managerial display from Klopp, and it truly paid off.

The 48-year-old is showing his influence as a world-class manager, with a balance of authority and strong man management.