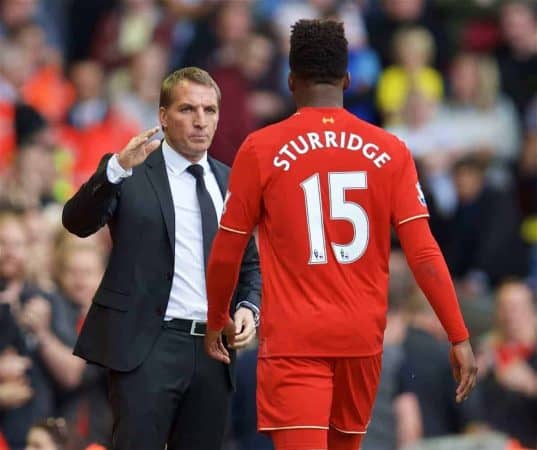 The timely return of Daniel Sturridge no doubt energised Brendan Rodgers, who spoke of conspiracies and vendettas against him after last week’s win over Aston Villa, writes Andrew Ronan.

Sturridge’s brace was the difference between another long week of pressure on Rodgers, and breathing space. The flak Rodgers has taken over the last few weeks obviously had him peeved as he let his feelings known as soon as a microphone was put in front of him. Whether or not there is a campaign from people outside the club to get rid of him is irrelevant; what he plans on doing to rectify such a poor start to the season is all he should be concerned about.

A fit Sturridge will provide goals, and perhaps worries about goal droughts can be forgotten. What can’t be so easily forgotten, though, is the mess that is Liverpool’s defence.

Rodgers would be naive in the extreme to believe that the ‘you score three, we score four’ mentality will propel Liverpool towards some sort of meaningful glory – as it almost did the season before last. Of course, since that dizzying campaign, there have been factors beyond Rodgers’ control which mean that such a repeat is off the cards.

Yes, a clinical Sturridge still remains, but the absences of Steven Gerrard and Luis Suarez mean a title charge is a complete non runner. However, the issue of a poor defence is something which Rodgers can act on if he wants to look back on this season with pride.

A solid defence is seemingly not top of his priority list at the moment, though, with Rudy Gestede being the latest to highlight how easy it is to score against Liverpool these days. His two goals showed just how nervous this Liverpool defence has become.

Any time a team get the ball within thirty yards of the Liverpool goal there is a collective intake of breath on the Kop. No doubt about it, this defence is as dodgy as a Volkswagen emissions test, and the worry is that the root of the problem – the centre halves and goalkeeper – will begin to effect the wing back positions.

Nathaniel Clyne isn’t culpable to many mistakes, but he doesn’t look like a player who completely trusts his centre halves and goalkeeper. The same goes for Alberto Moreno, even though he has returned to decent form. Can you blame them, though?

Mamadou Sakho was meant to be the saviour of Liverpool’s rearguard after his excellent display against Bordeaux, but he looked no more capable of coping with Gestede than Lovren would have. Such is the uncertainty in the Liverpool defence, Franco Baresi would look second rate if he featured in it. What can Rodgers do, provided he does finally decide to take drastic action?

As far as Mignolet is concerned, there is little he can do. Dropping the Belgian would mean Adam Bogdan has to be given a run in the team, and despite his penalty heroics against Carlisle, he isn’t the top class keeper that Liverpool desperately need. Petr Cech is – or was. The failure to sign him during the summer means Rodgers is going to be stuck with a liability of a goalkeeper who doesn’t inspire confidence – until January at least.

Dejan Lovren doesn’t look like he will ever live up to his price tag, and it looks like the injury he picked up against Carlisle means he mightn’t dislodge Sakho from the heart of defence when he does return. One glimmer of light for Lovren, though, is the decline this season of Martin Skrtel. While he has had his critics during his time at Anfield, Skrtel has arguably been Liverpool’s most reliable central defender over the last few years. However, he has been as poor as Lovren this season, and perhaps he’s escaping the amount of criticism that Lovren has received because he wasn’t signed during that infamous summer of 2014.

Although Liverpool’s wing backs have been more reliable than the goalkeeper and centre halves so far this season, it may only be a matter of time before the individual errors aren’t just happening at the core of defence. It wouldn’t be a surprise if they started to happen this Sunday at Goodison Park against Everton. The big games have a habit of highlighting the flaws in a team.

It would be a surprise, however, if Rodgers were to make his current defence as tight as a mermaid’s backside. Since he arrived at Anfield he hasn’t shown any real evidence that he is a manager who places a great deal of emphasis on defence. The presence of Mignolet and Lovren in particular speaks volumes about his respect for the art of defending. Would either of them get into any of last season’s top four – or the Tottenham and Everton sides for that matter? Highly unlikely.

How long Rodgers remains at Anfield is still up for debate. If Daniel Sturridge, in particular, continues to find the net, Rodgers may eventually go out with a bang rather than a whimper.

It’s not hard to imagine him, when asked why he lost his job at Liverpool, highlighting that he at least stuck to his principles of playing attacking football. It is hard to imagine, though, that he’ll have realised by then that ignoring a dysfunctional defence year after year went some way towards his exit.