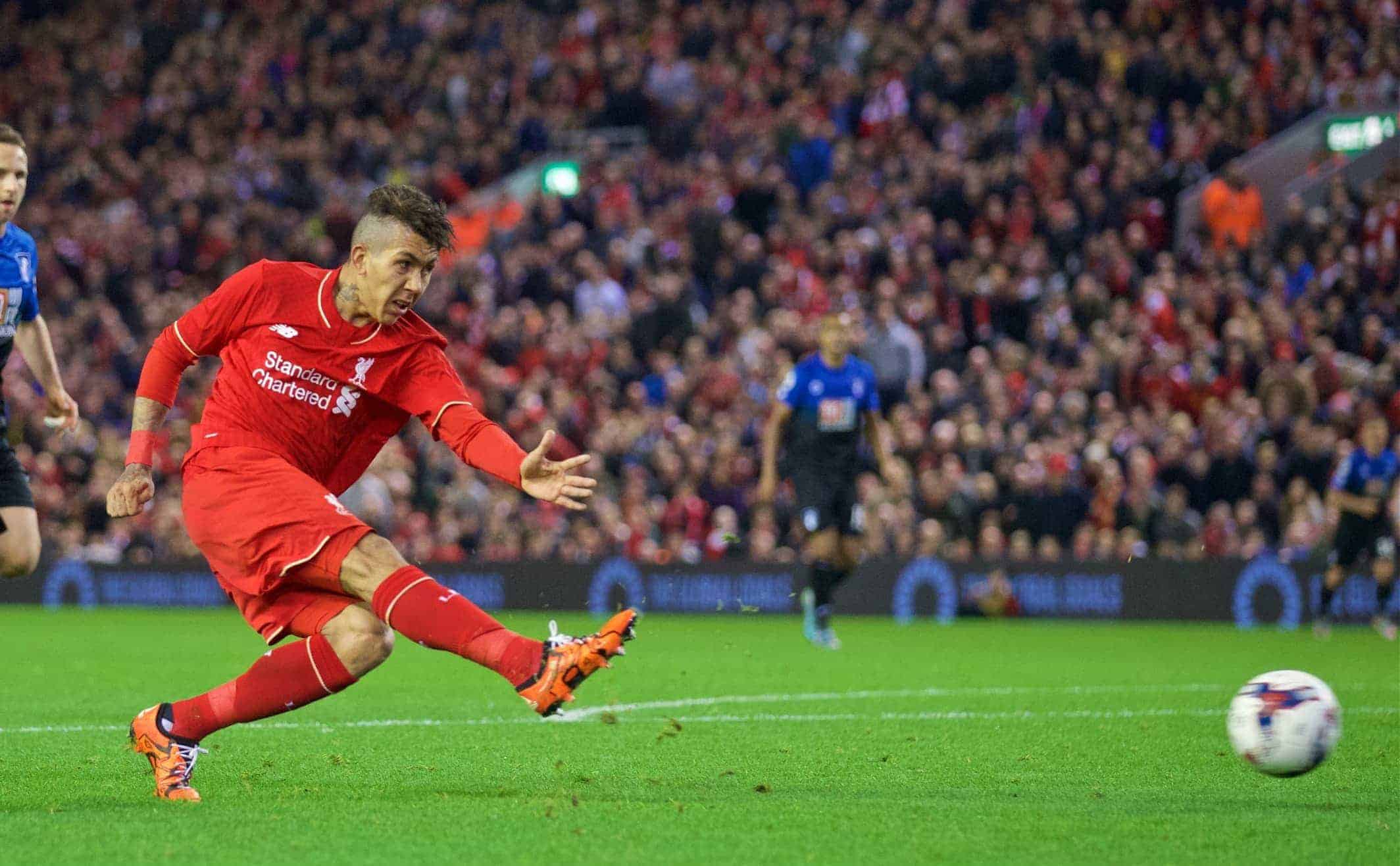 Liverpool moved into the quarter-finals of the League Cup with a second 1-0 win over the Cherries at Anfield this season on Wednesday night, with an away clash with Southampton to follow.

Nathaniel Clyne’s cool finish after 17 minutes proved enough for the Reds to progress and hand Klopp his first win as Liverpool boss at the fourth time of asking.

It was a positive night all round at Anfield and here are five talking points from the cup win.

The summer signing has had a slow start to life at Anfield, but he showed his undoubted quality with a display of real class.

Firmino was central to everything good that came from the Reds, with his touch and technique the catalyst for some creative, intricate attacking play and his tenacity helping to regain possession quickly.

The 24-year-old registered the game’s first shot after just 18 seconds, and he started as he meant to go on.

Liverpool took the lead from his perfectly weighted pass, unlocking the Cherries back line to find the well-timed, out-to-in run of the onrushing Joao Carlos Teixeira, who almost netted with a stunning back-heel before Clyne followed up.

The Brazilian turned in an effortless display, knitting play together superbly – particularly with Jordon Ibe – but he should have wrapped the game up when he dragged his shot wide when one-on-one after his pressing created a chance in the second half.

It was a joy to watch Firmino in this kind of form and he must now bring it to the Premier League stage. It was a memorable night for Teixeira, Connor Randall and Cameron Brannagan, who made their full Liverpool debuts – and the trio all impressed.

At right-back, Randall was strong and stood up to a tricky challenge against the lively Mark Pugh, proving more than a match for the Bournemouth winger, while offering more to the Reds’ attack as his confidence grew and the game wore on.

Brannagan slotted in seamlessly alongside Joe Allen, where the midfielder showed his calmness and intelligence in possession for the 64 minutes he played.

It’s been a long time coming for 22-year-old Teixeira, but he made the most of his Anfield debut with a creative and influential display.

He was extremely unlucky not to score his first Reds goal with his outrageous back-heel before later seeing a free-kick well saved at the Kop end.

It was a really positive night for the youngsters, who will be eager for more action on the big stage.

Ibe has struggled for form this season at a time he was expected to take on a key role, but he turned in a pleasingly improved display.

The teenager was bright from the off down the right side, where he caused all manner of problems for the visitors, with his pace, directness and trickery creating numerous chances.

The 19-year-old had a purpose back in his game that had been missing recently, and when he had possession, he had a direction about what he was trying to achieve, whether running on the outside to deliver a ball or driving inside to link play – which he did superbly with Firmino all night.

Pleased for Jordon Ibe. He needed a positive performance again. Hope he continues to turn the corner better than #LFC take them… #LFC

His confidence was plain to see in the second half, as he pulled off a brilliant disguised pass with his left foot for the underlapping Randall, after feinting to play it with his right.

Ibe was aggressive and industrious in his work off the ball too, and he looked like a refreshed man – which reflected in a real positive performance from the youngster. Perhaps the only dampener on the night was Klopp’s men failing to break their hoodoo of scoring more than once in a game and killing the tie off in the process.

While chances were far from aplenty, there were certainly enough opportunities to finish the Cherries off once and for all, and to enjoy the forgotten feeling of a comfortable victory.

Firmino in particular wasted a glorious chance to end the contest while Teixeira went close with a free-kick and Lucas Leiva did similar from long range, before Divock Origi came within inches from poking home a second as he slid in to meet Lucas’ fizzed ball in.

Decent performance. The wait for a two goal win stretches to 22 games and counting though…

It’s a frustrating feature for the Reds currently, that invites pressure and complicates the task trying to be achieved.

Ruthlessness and killer instinct needs to be reinstalled for Klopp to really take his side forward – something that will hopefully come in time.

The League Cup is certainly not the highest of priorities, but progress in the competition provides a welcome exercise.

A cup run can bring positive momentum to the squad, which will also help with installing confidence to a fragile group who, like the Anfield crowd, need to become believers as Klopp looks to transform the season.

Important opportunities for game time can be handed to the squad’s senior fringe players, who will have therefore have match practice under their belt should they be called upon – which is increasingly likely with the Reds’ injury crisis worsening by the game.

There’s also the vital chance for competitive first-team action for youngsters such as Randall, Brannagan and Teixeira, who will all undoubtedly benefit from the experience of the big stage.

It’s not the most important competition but it certainly has uses which it will provide for at least one more round.

Porto 1-5 Liverpool – As it happened