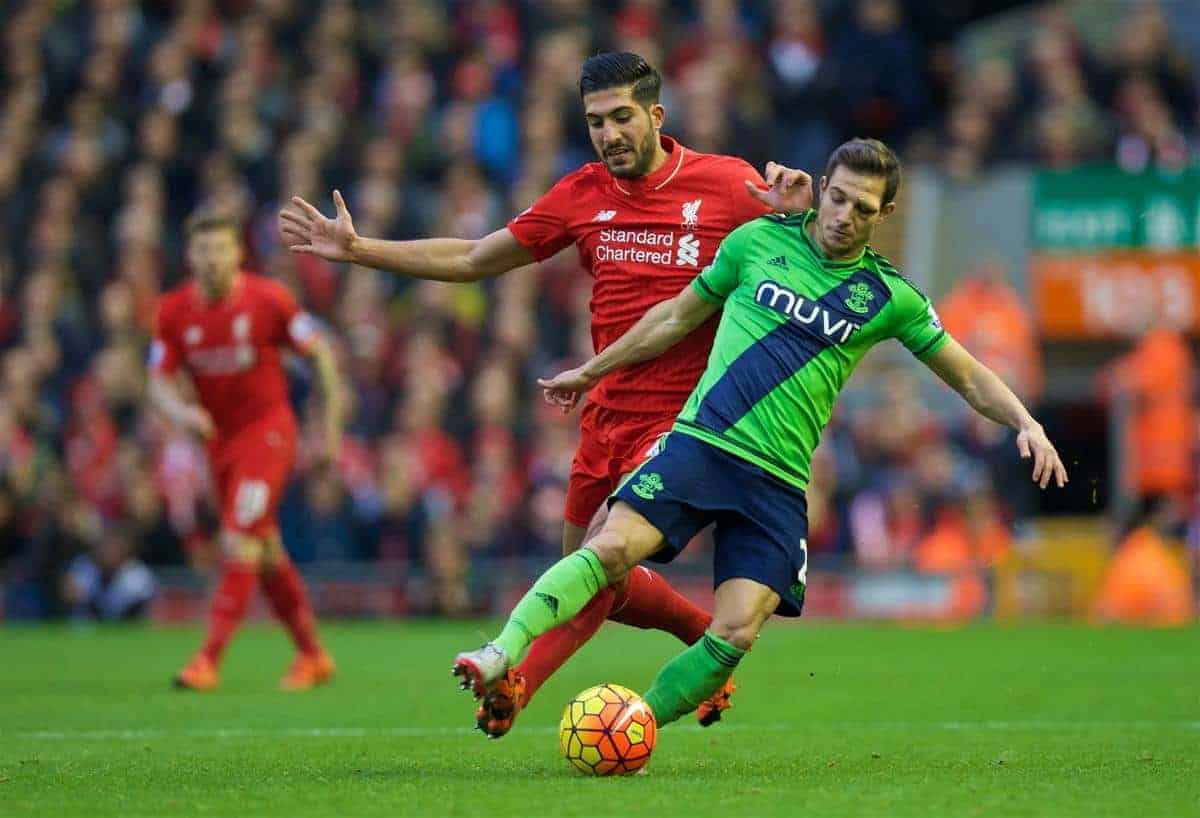 Jurgen Klopp made just one change to the side that drew 1-1 with Rubin Kazan on Thursday evening, as the German managed his first home Premier League match as manager.

Lucas Leiva replaced Joe Allen in midfield, but Divock Origi kept his place up front, with Benteke and Roberto Firmino on the substitutes’ bench.

It was a tricky game on paper, with Southampton‘s 3-0 win at Chelsea proof that Ronald Koeman’s side are not to be underestimated.

Emre Can guided an effort volley wide of Maarten Stekelenburg’s post, and Adam Lallana‘s tame strike was straight at the Dutchman.

It was a pretty disappointing first 25 minutes from Liverpool, with plenty of stray passes and individual errors affecting their play. There had barely been a chance of note.

James Milner fired wide after a flowing move, and Klopp showed his delight at his side’s piece of play. It was much more like it from the under-performing Milner.

Virgin van Dijk’s header was kept out by Simon Mignolet seven minutes before the interval, as Southampton continued to threaten in dangerous areas. Alberto Moreno fired over following nice work from Lallana.

It was an extremely forgettable opening 45 minutes.

Benteke replaced the ineffective Origi at half-time, as the Reds looked to push on and pick up three valuable points at Anfield.

Liverpool’s £32.5million man did make an immediate impression, and there was suddenly more threat about the hosts’ all-round game.

Moreno flashed a cross right across the face of goal, and at the other end the Spaniard made a fantastic challenge to deny the speedy Mane. Lallana shot harmlessly wide after a clever ball from Philippe Coutinho.

The match was very finely poised with 25 minutes left on the clock, with Koeman’s men arguably the side who looked the more likely to win it.

With 13 minutes left, Liverpool struck. Benteke rose brilliantly to head past Stekelenburg, and Anfield was a mix of relief and joy following the 24-year-old’s superb effort. Klopp celebrated in style.

The dangerous Mane fired over Mignolet’s crossbar late on, but Southampton could not muster any more chances before Andre Marriner blew the final whistle.

In the 86th minute it was 1-1, however. Mane finished from close-range following Jose Fonte’s looping header, and it was back to square one for Klopp and his team.

Mane was sent-off in the dying seconds, and it was the last moment of note in the game. As Andre Marriner’s final whistle blew, Liverpool had to rue two more dropped points at home.

Man of the Match: Christian Benteke