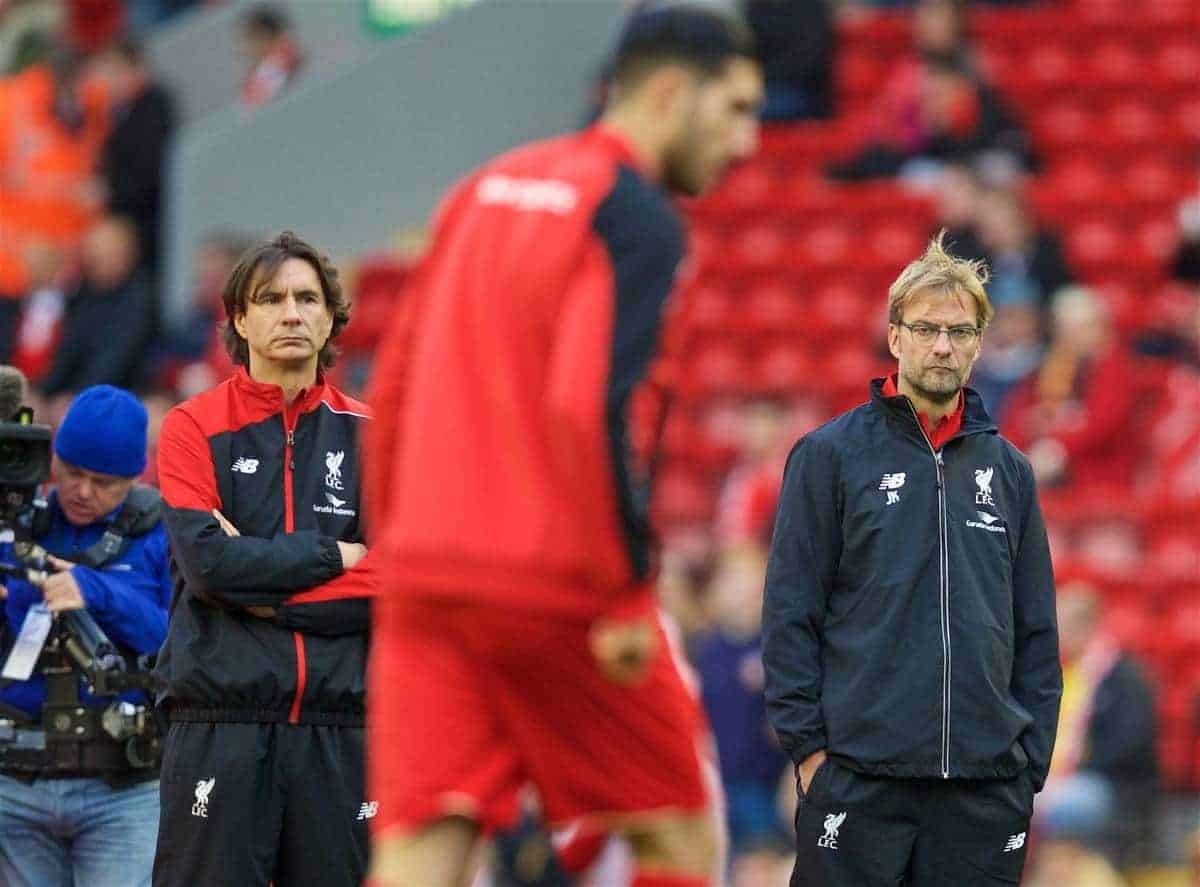 Ahead of Liverpool’s League Cup fourth round tie with Bournemouth, we look at who should start and who should be rested with a trip to Chelsea three days later.

The Reds welcome the Cherries to Anfield on Wednesday evening, with both sides looking for a place in the quarter-finals.

Jurgen Klopp is yet to make the dream start that many hoped, having drawn his first three matches in charge, but there have still been definite signs of progress.

The German will fancy his team’s chances of victory against Eddie Howe’s struggling outfit, as he looks to record his first victory in the Anfield hot-seat.

The match is the fourth of five games in 14 days for Klopp, and after starting the same 10 players in each of the first three games, the manger will surely look to rest some key players ahead of Saturday’s match at Stamford Bridge.

Here are three Reds players we believe should start on Wednesday, and three who need to be rested.

Emre Can has been one of Liverpool’s standout performers since Klopp’s arrival earlier this month, but the last 15 minutes against Southampton showed that some rest is called for.

The 21-year-old looked exhausted as the game reached its closing stages, and his performance became far more sloppy because of it.

The German international has got through a huge amount of work in the centre of midfield, and with Chelsea looming on Saturday, why risk him?

Emre Can has played the full 90 mins in the last 8 LFC games since 29/08/2015. Only Mignolet has played more minutes this season. #optaKali

His dynamism in the middle of the park will be vital against Jose Mourinho’s under-fire side, so keeping him fresh for that game feels like a no-brainer.

Philippe Coutinho is undeniably one of Liverpool’s most out-of-form players at the moment.

The 23-year-old is a shadow of the man who thrilled audiences with his brilliance last season, and he has played like someone with the weight of the world on their shoulders recently.

It is, however, easy to forget that Coutinho had Copa America commitments with Brazil in the summer, and that, coupled with lots of playing time this season, makes it easier to understand why he is looking a little jaded.

On his day, Coutinho is the Reds’ most important player, and Klopp needs to rest him against Bournemouth and allow him to be fresh for Chelsea at the weekend. Such are Liverpool’s lack of options at full-back, both Nathaniel Clyne and Alberto Moreno are being forced into playing every game at the moment. Clyne has started 13 of 14 games this season.

The Englishman could certainly do with a night off against Bournemouth, with a risk of burnout something Klopp must be wary of.

Moreno’s more energetic, attack-minded style means he will also be feeling a little fatigued right now, so it would also be understandable if he was left out instead.

Either way, one should be rested for the match, with 20-year-old Connor Randall coming in and making his debut at right-back.

Joe Allen has found himself on the substitutes’ bench in the league under Klopp, with Can and Lucas Leiva preferred in midfield, but he did start against Rubin Kazan in the Europa League.

It makes complete sense for the Welshman to come in against Bournemouth, replacing Can or Lucas in midfield.

Allen has not exactly been loved on Merseyside since his arrival in 2012, but he has never really got an extended run of games at any point.

Wednesday would provide a good opportunity for him to show Klopp what he is made of, although a repeat of his rather insipid 45 minutes in Europe would not do his future chances much good.

Too much pressure was heaped on the shoulders of Jordon Ibe at the start of this season, and it has come as no surprise to see that he has struggled.

The former Wycombe Wanderers youngster is still very much a work in progress, and it is in competitions such as the League Cup where he should get opportunities to shine.

Ibe is the only natural wide player in Liverpool’s squad so his pace and trickery on the wing would bring something different to Klopp and his side.

The 19-year-old is an enormous talent, and given Klopp’s preference for promoting youth in the past, who’s to say a big performance wouldn’t put him in contention for Chelsea?

It has been a frustrating start to life at Liverpool for Roberto Firmino, with a combination of injuries and form conspiring against him so far.

There were signs during his second-half cameo against Southampton that he was finding his feet. The Brazilian will take confidence from that game, and bringing him into the starting line-up in place of Coutinho or the suspended James Milner would make sense.

Whether he can be relied upon to start against Chelsea is one thing, but 90 minutes against Bournemouth should see the 24-year-old make further strides in a Reds shirt.