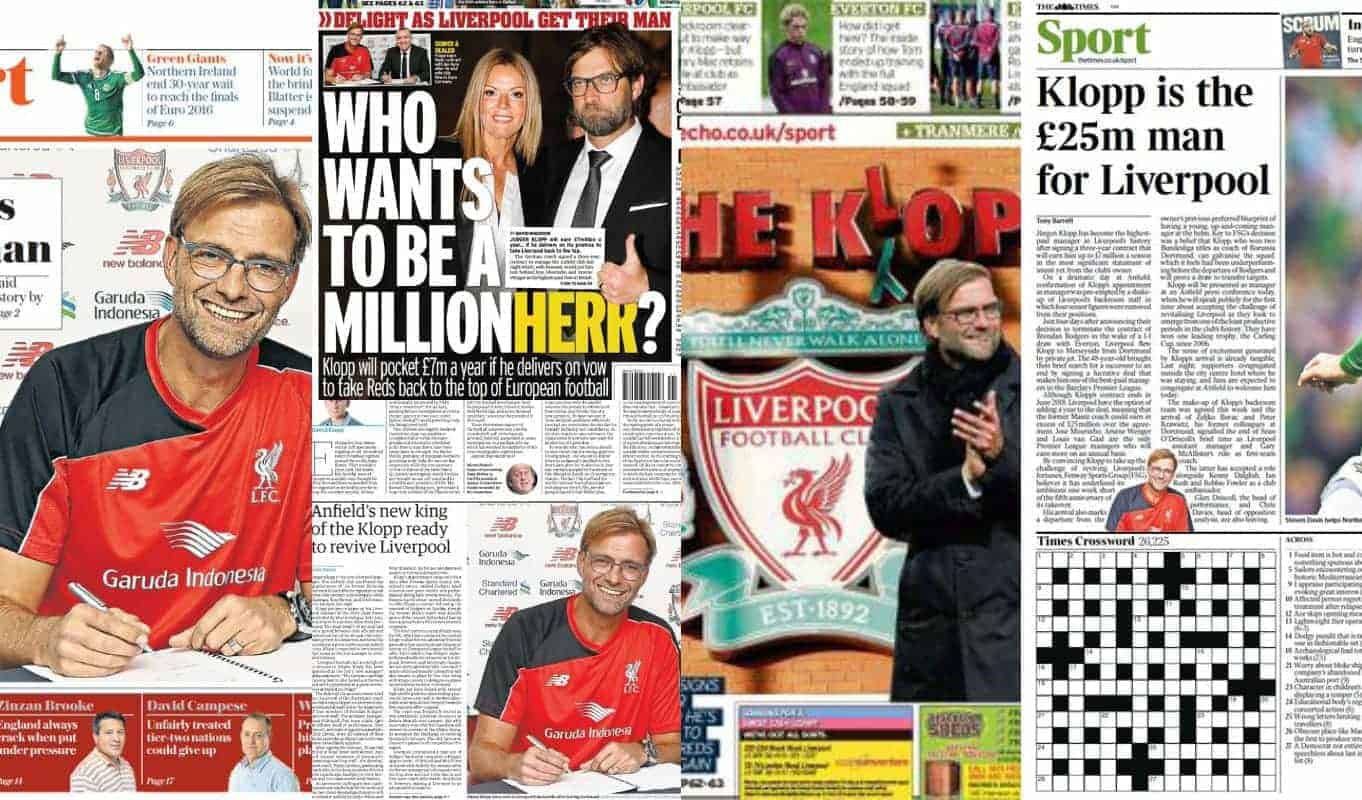 It’s the morning after Jurgen Klopp‘s official appointment as Liverpool’s new manager, and we look at how the newspapers reported it. The much-loved 48-year-old signed a three-year deal at Anfield on Thursday evening, signalling the Reds’ biggest signal of intent since Rafa Benitez took charge 11 years ago.

Klopp is one of Europe’s most highly rated coaches, and the fact that he could have been manager at any top club in the world shows what a coup this is for Liverpool.

Here is how the morning papers reported Klopp’s arrival on Merseyside.

The Telegraph‘s Chris Bascombe focussed on the magnitude of the appointment:

For Liverpool to lure Klopp to Merseyside is the club’s biggest coup since Rafa Benítez left La Liga’s champions for Anfield in 2004. It is perhaps even more satisfying because many supporters feared the days of attracting a coach of such clout were gone, certainly for the foreseeable future. Lest we forget, the last three managerial appointments came from Craven Cottage, the Liverpool Legends Lounge and The Liberty Stadium.

One shrewd recruit can make all the difference, and FSG always said they would endeavour to get the best they could. In Jürgen Klopp, the Liverpool owners may have finally recruited the smartest guy in the room.

Andy Hunter of the Guardian believes that, although brilliant for Liverpool, the job represents a risk in Klopp’s career:

Every managerial appointment is a football club’s gamble but the arrival of Jürgen Klopp at Liverpool represents a departure. This time, the risk is entirely Klopp’s. The man with a passion for heavy metal music and heavy metal football has accepted a job akin to Spinal Tap’s drummer – a figure destined to be replaced on a regular basis having succumbed to an unfortunate demise.

Klopp is placing an esteemed reputation on the line to revive Liverpool, not only for a passing title challenge but consistently, and to overcome the problems that drove him to distraction in Germany on a wider scale in the Premier League. He is no longer fighting one wealthier rival with the resources to tempt his best players away, and needs a squad lacking in confidence to buy into his different tactics and double training sessions quickly. Paul Joyce of the Express feels that, once the joy dies down from the fans, Klopp must make sure he justifies the hype:

The private jet which touched down at John Lennon International Airport was the German’s white charger as the hipster’s choice-turned-man-of-the-people arrived with the task of orchestrating a lasting revival at Anfield.

Ambition rules where apathy reigned and now all Klopp needs to do is justify the hype. Changing the mood may well prove to have been the easy part.

Liverpool have not just hired a showman on a three-year contract worth a reputed £7m a year.

The Liverpool Echo‘s Dave Prentice was another who wrote with an air of caution, correctly stating that the much-criticised transfer committee could still be problematic for Klopp:

Jurgen Klopp‘s eagerly anticipated arrival at Anfield, greeted by the kind of excitement you’d expect for such a charismatic, individual and successful manager, should be tempered by the realisation that he will still be working under the same fudged set up.

For directors, read transfer committee. And the same issues which Brendan Rodgers struggled to work with will still be in place for Jurgen Klopp to deal with.

All will want a say in how money is being spent at Anfield. But ultimately Klopp’s say has to be final.

The transfer committee may have a lot more to do than simply sign the cheques nowadays, but offering Jurgen Klopp advice must be the limit of their influence.

Liverpool given Takumi Minamino boost ahead of pivotal pre-season

Liverpool given Takumi Minamino boost ahead of pivotal pre-season