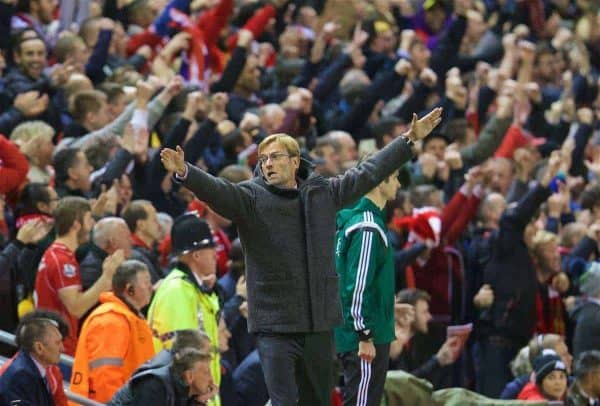 Following Liverpool’s 1-1 draw at home to Rubin Kazan on Thursday evening, we round-up the best of the social media reaction from the game.

Jurgen Klopp‘s first Anfield outing turned out to be a really disappointing evening, as the German’s team failed to produce even a competent performance in front of an expectant Anfield.

The Reds couldn’t break down 10 men for more than half of the game, and Emre Can‘s goal really was one of the few plus points on the night.

It was an evening when it became even more clear how much work Klopp has to do as manager, and a big improvement is needed at home to Southampton on Sunday.

Here is how social media reacted to the match:

Two things we've learned. Klopp knows he's got an average squad & Liverpool's fans have to understand there are no miracles in football.

A frustrating night where a distinct lack of cutting edge was laid bare. Do we have a single player capable of taking a good corner?

Hope people realize just how much this squad needs work.
Plenty of it.#LFC

It’s going to take time. In a way, perhaps no bad thing to have a slight reality check. We’ll get there, but realistically we’re looking at months not weeks for Klopp’s ideas and tactics to get properly embedded in the team and becoming second nature.

Another man-of-the-match performance from Mamadou Sakho. But Brendan Rodgers didn't rate him, and nor do the English media. #LFC

A terrible performance. Simple as that.

LFC not quick enough getting forward and Klopp’s letting them. By the time it gets forward Kazan have 10 back behind the ball.

Too little desire to throw men forward. Klopp and his team are going to have to coach these bad habits out of our side.

Sakho again imperious with Owen Hargreaves the first commentator to recognise his passing ability. A momentous day if not result.

Well, that was quite an anti-climax….

Disappointing result. Rome wasn't built in a day. Tough job on for Klopp. The side is bereft of confidence. Effort there though. #LFC

Fans are often accused of making ill-considered snap judgements. BT Sport have given Klopp 1.75 games before delivering their verdict.

Left the game thinking we put in a decent showing with more positivity than seen for a while. Put Twitter on found out we were actually shit

Fans were the best I've head for 18months

Not clinical enough in the final third with our shots/passes. That's one of our main issues.

Once we get that sorted we'll be alright.