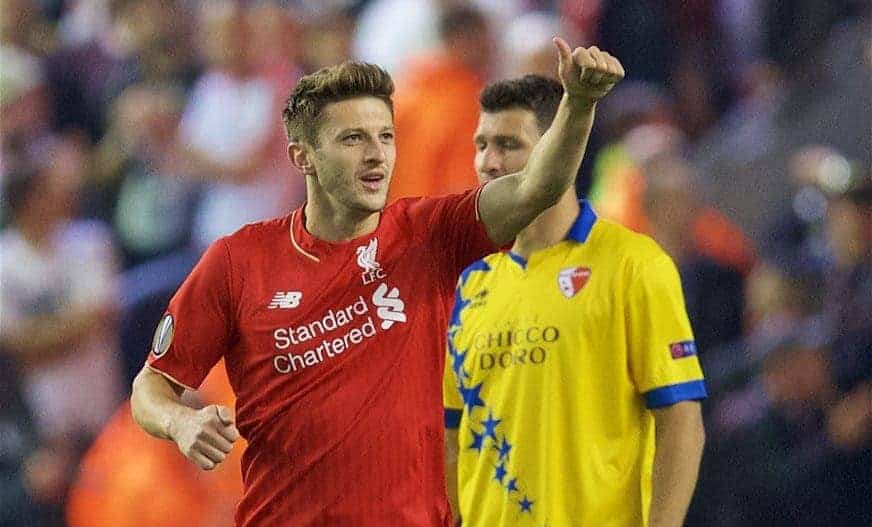 Adam Lallana reflected on a frustrating game for Liverpool as they were held to a 1-1 draw by FC Sion at Anfield on Thursday night, looking ahead to Sunday’s “massive” Merseyside derby.

Lallana’s second goal of the Reds’ Europa League campaign was quickly cancelled out by FC Sion’s Ebenezer Assifuah as Liverpool failed show conviction in the box to share the points with the Swiss visitors.

Another disappointing night at Anfield will inevitably turn up the pressure on Brendan Rodgers and his side ahead of the visit to Everton in the Premier League on Sunday afternoon.

“It’s just important we recover well. We’ve got a massive, massive game on Sunday and we want to get three points.

“The derby’s got a bit more spice to it being against Everton, so we look forward to that and hopefully get three points.”

Lallana himself spurned a chance to win the game for Liverpool, an opportunity he was left ruing after the full-time whistle.

“I had a good first touch, I was just leaning back a tad,” he added. “But no excuses, I should have put it away.”

The full-time whistle was met by boos from some supporters, as further question marks are placed over the team’s undesirable form.

Lallana continued, “We’d banked to win our home games in this competition and we’d said before the game it was important to win.

“I thought we had enough chances tonight including myself at the end, but I just found myself a bit off balance.

“We’re disappointed as we thought we created enough to get the three points, but it wasn’t to be.”

Where do Liverpool’s biggest problems lie? Let us know your thoughts in the comments section below.