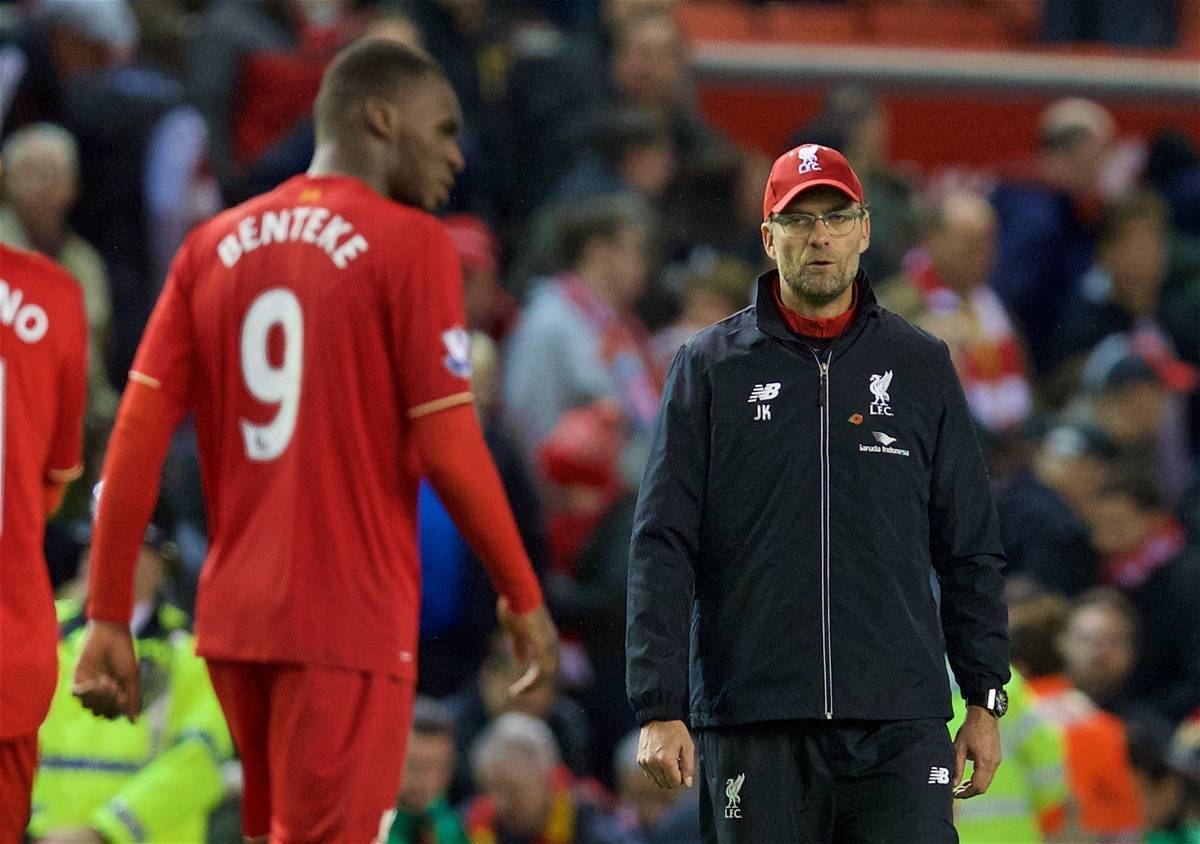 Sunday’s 2-1 loss at the hands of Crystal Palace gives Liverpool manager Jurgen Klopp plenty of food for thought during the international break.

Falling to defeat at the seventh time of asking is no major cause for concern for Klopp as he assesses the progress made by his Liverpool side heading into November international break.

But with goals from Yannick Bolasie and Scott Dann securing Palace another Anfield victory, the German would be wise to focus on the nuances of this result.

It has been a worrying hallmark of this Liverpool side for the past two seasons, with a failure to either defend or attack set pieces a major flaw within both Brendan Rodgers and Klopp’s tactical outlook.

The zonal approach to defending corners and free-kicks has led to countless problems in the past, and this was apparent at Anfield on Sunday.

After towering over the meek Roberto Firmino in the penalty area, Dann’s initial header was parried away by a weak-wristed Simon Mignolet, but the former Liverpool season-ticket holder was on hand to steer in the rebound at the second time of asking.

It was a simple move that could be spotted a mile off; Liverpool’s defensive organisation is a weakness that Alan Pardew and many other Premier League managers have exploited.

At the other end of the field, Liverpool fared little better, with the lack of a dead-ball specialist seeing the likes of Alberto Moreno and Phillipe Coutinho sharing duties when it came to corners and free-kicks.

To no surprise, these often came to nothing. Klopp must work on this problem area to progress.

Liverpool’s inability to defend echoed throughout their all-round performance on Sunday, with the Reds failing to deal with Palace’s pacy, four-pronged attacking line of Bolasie, Bakary Sako, Jason Puncheon and Wilfried Zaha throughout.

Martin Skrtel’s tendency to retreat when faced with quick, dynamic attackers played into Palace’s hands, while Nathaniel Clyne and Alberto Moreno‘s naturally high starting positions allowed Palace to counter and exploit the space ahead of the Slovak.

Bolasie’s opener was a prime example of this, unhinged by errors from Moreno and a timid Emre Can.

The same could be said in attack, with the likes of Christian Benteke and Adam Lallana lacking the killing blow required to secure victory.

Klopp has often spoke on aggression and bravery, both in defence and attack, and this was lacking on Sunday afternoon.

“If everyone thinks we gave everything we had then it is wrong. Of course we could do more,” he explained after the game, and a lack of ruthlessness at both ends of the pitch against Palace clearly proved this.

Jordon Ibe a Positive Once Again

Jordon Ibe showed major signs of progression under Klopp with the only goal in Liverpool’s 1-0 win over Rubin Kazan in midweek and, with James Milner injured and Roberto Firmino rested, the 19-year-old was rewarded with a starting role against Palace.

While his team-mates struggled to break through the Eagles’ compact, low block, Ibe’s pace and power cutting inside from the right flank gave Liverpool a focal point in attack.

Ibe, who is showing more variety in his movement following Klopp’s arrival, completed three successful dribbles and was fouled twice—more than any other Liverpool player—as he looked to penetrate the Palace defence.

More impressive, however, was the England U21s international’s creativity in the final third: Ibe made three key passes, the second most of any player.

His work interchanging with Clyne on the right wing provided Liverpool with a useful outlet in attack, but unfortunately his team-mates were unable to capitalise.

Anfield was silenced when Mamadou Sakho collapsed onto the pitch just after the half-hour mark, landing awkwardly after challenging for a header.

After bravely playing on for a handful of minutes, the Kop’s fears were realised when the centre-back was forced from the field—with Dejan Lovren introduced as his replacement.

While Lovren produced a solid performance alongside Sakho in Kazan, and began positively at Anfield on Sunday, the Croatian’s partnership with Skrtel is fraught with indecision and disorder.

“That was the worst thing. I would prefer to lose 4-1 and keep him in the team,” Klopp confessed in his post-match briefing, underlining Sakho’s importance to the Reds’ success.

The 25-year-old will have a scan for a knee issue before departing for the international break, and Klopp will be hoping for nothing serious.

Losing Sakho would be a blow, with the Frenchman in top form under Klopp this season. Is there such a thing as a European hangover?

Recovery expert Raymond Verheijen believes so, with the Dutchman’s 27,000-match study highlighting the negative effects of a two-day period between games.

Though Klopp refuted suggestions that performing in the Europa League on Thursday and in the Premier League on Sunday would effect his side ahead of the game, there were clear signs of fatigue within his lineup.

Both Emre Can and Christian Benteke were noticeably affected, with the former’s error gifting Bolasie the opener—both played 90 minutes against Rubin.

Klopp’s unwavering belief in his side is admirable, with the German not looking for excuses despite Liverpool’s busy fixture list.

But it can be argued that Palace’s fresh legs made the difference at Anfield.