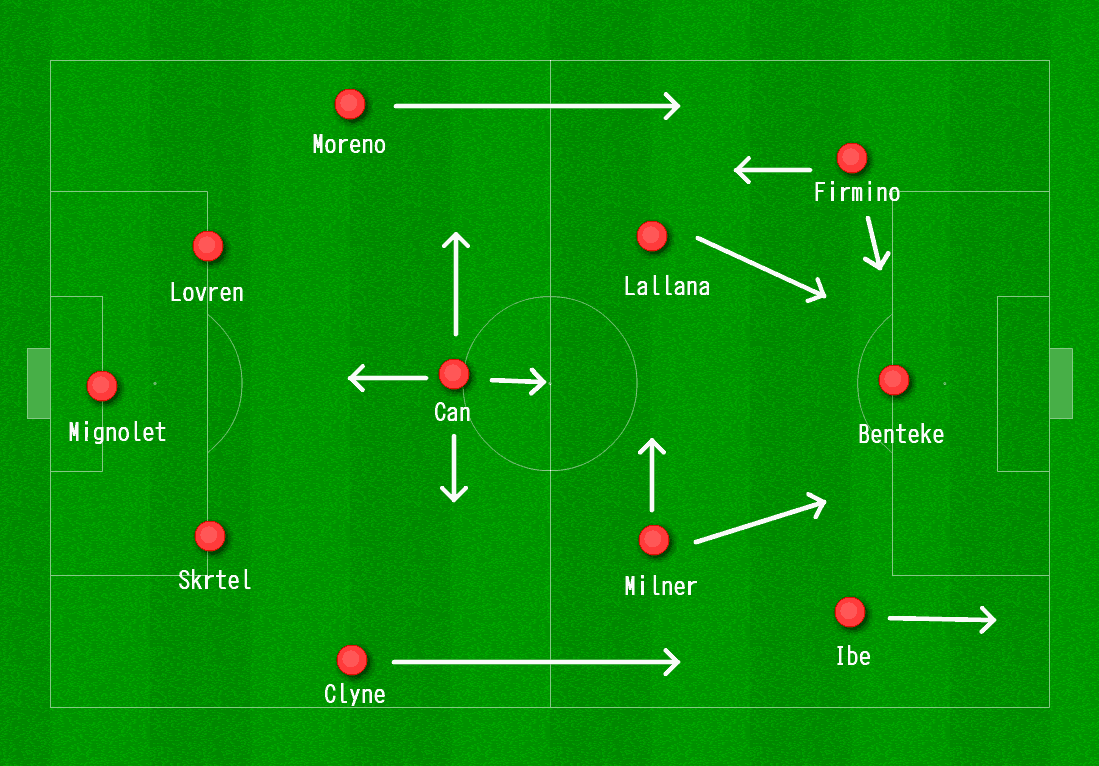 A change in personnel saw a slight change in system from Jurgen Klopp, as Liverpool ran out 1-0 victors at home to Swansea City. With Lucas Leiva suspended and Philippe Coutinho still suffering from a hamstring injury, Klopp was forced to shuffle his pack as he led his side out against Swansea on Sunday evening.

This saw Emre Can drop into the holding-midfield role, with Jordon Ibe continue his starting berth in a fluid 4-3-3 formation at Anfield.

An attack-heavy lineup that also featured Roberto Firmino and Adam Lallana in support of Christian Benteke was expected to shape up as a 4-2-3-1 before kickoff, but Lallana took up a deeper role than usual as part of Klopp’s midfield three.

As a result, Liverpool were able to press Swansea high up the pitch, with Lallana, Firmino and Alberto Moreno in particular all impressive off the ball on the left-hand side.

But for all their dominance and neat buildup play in the final third, Liverpool lacked a quality end product throughout the first half.

This was not helped by the poor movement of Benteke in attack.

The Belgian was ostensibly tasked with an off-the-shoulder duty as lone striker, and while he troubled Kyle Bartley with his pace he failed to contribute significantly as Liverpool squandered countless opportunities.

It took an element of fortune as the byline hugging Jordon Ibe, impressive on the right flank, floated a cross into the box—which hit left-back Neil Taylor on the hand to give the Reds a penalty.

Milner happily converted, putting the Reds 1-0 up and allowing Klopp the freedom to experiment.

This saw Jordan Henderson introduced on 64 minutes and Daniel Sturridge brought on seven minutes later, with the duo taking Firmino and Benteke’s places in Klopp’s lineup.

Henderson and Sturridge, making their first appearances under Klopp after injury, changed the dynamic considerably.

From the offset, Sturridge’s movement—drifting wide to collect the ball and support Ibe, and dropping deeper to put pressure on Swansea in midfield—saw a more fluid attacking outlook for the Reds.

Similarly, with Milner shifting to the left and Lallana moving into a more advanced role, Henderson’s right-sided midfield position allowed him to probe with consistency.

The Liverpool captain made some nice overlapping runs into attack, troubling the Swansea defence as Monk threw bodies forward in search of an equaliser.

Both Henderson and Sturridge were understandably off the pace, but the returning pair gave a glimpse of an encouraging future at Anfield.

Add Firmino and Philippe Coutinho to this lineup, and Liverpool can expect to dominate with true quality in the final third.