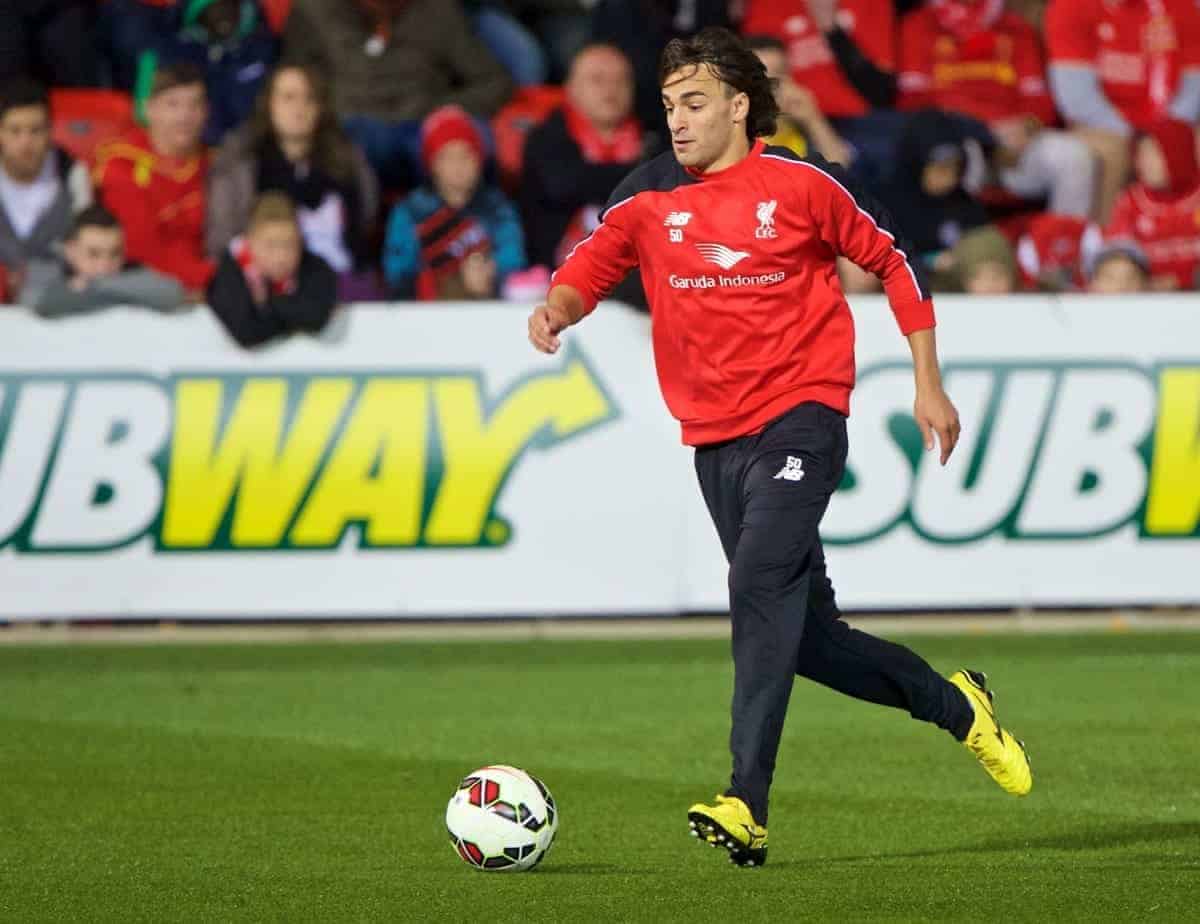 We take a look at how Liverpool’s loaned men performed for their temporary clubs throughout the week’s fixtures with a disappointing amount of action for the loanees.

Youngster Kent started on the bench for Coventry against Peterborough on Saturday, but helped his side battle back to a 3-2 win making a positive impact as second half substitute.

48 – Kent gets involved immediately, into a dangerous crossing area but overhits his ball into Armstrong in the area! 0-2 #PUSB

With the Sky Blues trailing 2-0 at half time, Tony Mowbray introduced the Reds loaned man in a double substitution, and in a blistering second half performance from City, Kent helped his side complete a superb turnaround.

63 – Penalty appeal turned down! Kent was challenged in the area and went down, but the referee was unmoved. 1-2 #pusb

Kent entered into attacking midfield where he didn’t directly claim a goal or assist for himself, but did make a hugely positive impact on proceedings, with his pace, skill and creativity instantly making a big difference to the attack, who benefitted from his work with three goals to show from an excellent second 45 minutes.

Much, much better from the #SkyBlues both Kent and O'Brien making a difference. Fans right behind the team again #PUSB

Danny Ward played 90 minutes in Aberdeen’s 3-1 defeat at Celtic on Saturday as he continues as the Dons’ No.1.

Despite the Pittodrie side’s drop in form which has seen them lose four of their last five matches and fall to third in the SPL table behind Celtic and Hearts, Ward continues to impress and he did so again despite the loss at Celtic Park.

28: Great save from Danny Ward as he denies Griffiths, Dons break quick with Hayes & McGinn but McLean's cross is held by Gordon #DonsLIVE

The Wales ‘keeper could do nothing about the three well placed finishes he conceded, and he again showcased his excellent shot-stopping ability, making some good saves to keep the score-line respectable, but one outstanding stop in particular to deny Leigh Griffiths when left one-on-one.

Continuing a familiar theme, Ward’s Reds teammate McLaughlin again watched the 90 minutes as an unused substitute for Derek McInnes’ side as his match action remains limited.

With Williams and Stewart still injured, Vigouroux was the only Red to feature for Swindon on Saturday in their 1-0 loss against Wigan, and Robins’ No.1 endured a mixed afternoon.

The Chilean ‘keeper made some decent saves – including an outstanding point-blank stop to deny Wigan a late winner with only a minute left to play – but what looked to be a good afternoon turned into a disaster just moments later.

After being booked for timewasting, Vigouroux spilled a floated cross he came to collect dropping the ball on the edge of his six yard box, which Wigan striker Junior knocked home in the dying seconds to punish the Reds’ ‘keeper’s error and condemn the manager-less County Ground outfit to a fifth loss in six matches.

At a time when he was regaining positive form after a three week lay-off with injury, Markovic suffered another unwelcome set-back last Thursday night.

After starting in the role he has made his own on the right of Fener’s attack, the Serbian was forced off injured after just 29 minutes of  their 1-0 win over Osmanlispor which is set to side-line him for their Europa League clash with Ajax on Thursday, and could possibly see him out for a month.

After a positive start to his loan spell at Deportivo La Coruna, Alberto has frustratingly found himself on the bench in recent games.

The Spaniard again started amongst the substitutes on Friday night for their clash against Atletico Madrid, but he entered to play the final 20 minutes of the 1-1 draw.

Never understood how Luis Alberto even lost his place in the side. He linked up brilliantly with Lucas Perez earlier in the season.

Alberto was introduced with his side 1-0 down, and though he didn’t make a direct contribution to Lucas Perez’s equaliser – he helped his side battle back to claim a good point against Diego Simeone’s side, something that will hopefully see him reclaim his place back in the starting XI.

Wisdom made a welcome return to action on Tuesday night, playing 90 minutes for Norwich in their penalty shoot-out defeat to Everton in the League Cup.

The defender played at right-back for the Canaries, and turned in a solid defensive display for the duration he was on before being replaced at the end of normal time – due to picking up a knee injury – by first choice full back, Stephen Whittaker.

After a decent performance in midweek, the knee injury sustained frustratingly ruled Wisdom out of the Canaries match-day squad completely for their 2-1 loss at Man City – a game that saw centre back Russell Martin sent off which could open a place for the Reds loanee to come back into the side.

Liverpool’s Italian striker missed both of AC Milan’s games this week – a 1-0 victory against Chievo on Wednesday night, and their 3-1 win at Lazio on Sunday evening – due to the on-going injury the continues to keep him out of action at the San Siro.

Despite claiming an excellent assist last weekend, German striker Yesil started on the bench and played only the final 15 minutes for Luzern as they slumped to a 1-0 loss against St Gallen on Sunday night.

With his side chasing the game, Markus Babbel introduced the poacher as he searched for a way back, but the 21-year-old couldn’t produce the rescue act needed to grab a point with such little time to make an impact.

The wait for first team action at Aston Villa continued for Ilori in midweek, as he was left out of the Villains’ 2-1 League Cup defeat against Southampton.

The Portuguese defender will hope the sacking of Tim Sherwood and reportedly imminent appointment of Remi Garde increases his chances of match action over the coming weeks at Villa Park.

Spanish midfielder Canos has been in good form at Griffin Park, but he was disappointingly an unused substitute for Brentford on Friday night, as they ran out 1-0 winners in a local derby clash against Queens Park Rangers.

Jones continues to be out of action for Blackpool – missing their 4-3 defeat at Bury on Saturday – as he steps up his rehabilitation after undergoing double surgery on a bad knee injury sustained four weeks ago.

After two games of increased action, Wales international Wilson was back to the bench where he watched on as an unused substitute for Crewe, who battled to an impressive 1-0 win over Sheffield United on Saturday.

Nigerian U21 international Awoniyi continues his wait for competitive first team action at FSV Frankfurt, as he was again an unused substitute in their 1-1 draw against Paderborn on Saturday afternoon.