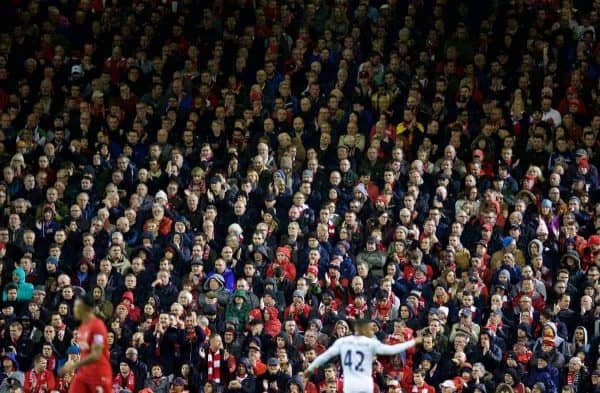 Liverpool fans must listen to the messages Klopp is sending

Are we spectators or supporters? Fans or customers? Jeff Goulding on Sunday’s defeat to Palace and the issue of the role Liverpool fans play at Anfield.

The annoying thing about stereotypes and cliché is that there’s occasionally a morsel of truth in them. On Sunday anyone in or around Anfield would have found it hard to argue that it wasn’t “grim up north.” It was a miserable day on the Mersey and not just because of the footy.

I’d opted to walk to the game despite the dark skies and drizzle, partly because the washing machine keeps shrinking my pants and also because the kids keep shrinking my bank balance. It’s a decent walk; roughly 8,000 steps according to the pedometer on my mobile phone.

By the time I reached the ground I was in a fairly decent mood. I’d been lifted by recent results. It seemed that Klopp’s philosophy was slowly sinking in. The result against the Russians was decent. The performance was even better.

In fact, I was so buoyant, I actually allowed myself to believe that Jurgen could brain-wash away any of the Europa League fatigue that blights any team who qualifies for the competition. Palace have proven a bogey team in recent seasons. The pain of the 3-3 that effectively ended our title challenge in 2013-14 will take a while to ease. Nevertheless I was still genuinely optimistic.

Palace look a decent side and Pardew deserves great credit for the way he has them organised, but that’s only part of the story. They look big and strong and they clearly came for more than a point. From the moment the game kicked off it was obvious this wasn’t going to be a stroll.

Coutinho and Cabaye both put efforts high and wide as the sides traded punches early on. Still, I felt reasonably comfortable. I even commented to the guy next to me that Klopp seemed to have sorted the defence out. When will I ever learn? Cue more uncertainty in the box. Liverpool could and should have dealt with the threat from Palace far more decisively. Instead, from where I sat, Bolasie seemed to have way too much time and space in the box.

0-1 and Red hearts sank. Still last weeks trouncing of Chelsea showed that Liverpool had rediscovered some resilience and all was probably not lost. Just as they had in the capital Liverpool did fight back, but there was clearly something missing. We just didn’t threaten enough and a number of chances, including a header from Benteke and a shot from the improving Moreno, went begging.

Then came the hammer blow. Sakho had picked up a knock. He seemed to be struggling badly, but opted to fight on through the pain. Loud applause erupted along with chants of Sakho, Sakho, Sakho as the player ran gingerly back into play. Someone behind me joked “he was going off there, until he saw Lovren pulling his shirt on then he though fuck that.”

The comment provoked nervous laughter. We all knew what losing the Frenchman meant. It’s generally acknowledged, amongst the people I sit with, that he is the reason for our defensive improvement. To lose him to injury would be a hammer blow even if we weren’t a goal down.

Sadly his bravery couldn’t make up for the obvious injury and he eventually made way for the former Southampton man. Two minutes later any feelings of trepidation when Coutinho gleefully accepted Lallana’s assist and buried his shot into the centre of the goal.

Sadly though the half was petering out. Even with the time added on for Sakho’s injury, The Reds couldn’t take advantage of a succession of corners. Anfield seems to be a place where corners go to die these days, unless they’re being taken by opposition players of course. There were mutterings and curses all around as we squandered one after the other. “I don’t know why we bother,” said someone to my right. Another chipped in “might as well just give them goal-kick we won’t do anything with it.” Yes, it was grim up north on Sunday.

Still, we went in to half-time on level terms and with every reason to believe we could do to Palace what we had done to their neighbours a week earlier. We would be bitterly disappointed.

Liverpool weren’t bad in the second half. They created enough goal-scoring opportunities to take the three points, but we are just far to blunt in attack. At times you just can’t see a goal coming. From Palace’s point of view it would have felt like a fairly comfortable afternoon.

As the game ebbed towards the final ten minutes I started to think that a draw wouldn’t have been the worst result ever. Disappointing yes, but given the long journey in midweek, coupled with a short recovery period; it was at least understandable. Klopp may yet equal Paisley’s record of eight unbeaten games at the start of his tenure.

Palace though hadn’t come for a draw. Pardew had gambled on Liverpool tiring towards the end of the game and his side rallied in the final stages. They won a corner and anxiety levels began to rise once more.

From where I sit it’s hard to see exactly what went on in the box, but it’s not that far way that you can’t see that this was another self inflicted wound. Klopp cut a miserable figure on the touchline, as all around him seats were emptying fast.

He will have come to Liverpool believing the Anfield faithful to be soul brothers of their Dortmund counterparts. Maybe once, but not today. Liverpool’s home support seems broken right now. Twenty five years without a title has sapped the energies of even the most ardent of supporters. Frustration and resignation is, at times, all pervading.

Klopp was right to identify this as an issue in his first interview. However, even he seems taken aback by the scale of the problem. Earlier in the game I had been lambasting the Palace supporters for their moronic and predictable chants. It’s like they work off a script and you could run a sweep on what minute they’ll start the “where’s your famous atmosphere?” chant.

Trouble is, when it comes to stereotypes and clichés, there’s often a grain of truth in them. Anfield is a shadow of its former self and we need to accept this as fact. It’s no longer acceptable to dine out on past glories. The grim truth is that we are now part of the problem.

I’ve heard it said that it’s up to the players to give us something to shout about. Well that’s partly true, but what’s our role? Are we spectators or supporters? Fans or customers? It’s a two way street in my mind. How great would it have been had people stayed until the end. Imagine the message it would have sent if, instead of trudging away, heads bowed, the whole ground could have sang our anthem as loudly in defeat as we do in victory.

Of course many on The Kop stayed and the manager duly made his way over the half-way line to applaud them, but even here we were a pale imitation of times gone by. Liverpool have a manager of genuine quality. He knows the score and, perhaps more importantly, he has the credibility and bottle to put us in our place.

If Klopp’s reign is to become a genuine rebirth, we have to listen to the messages he is sending. We must stop believing our own hype. This is a new beginning and we are where we are, no matter how unpalatable that is. It’s time for us to play our part, or we will forever be 8,000 steps from heaven.