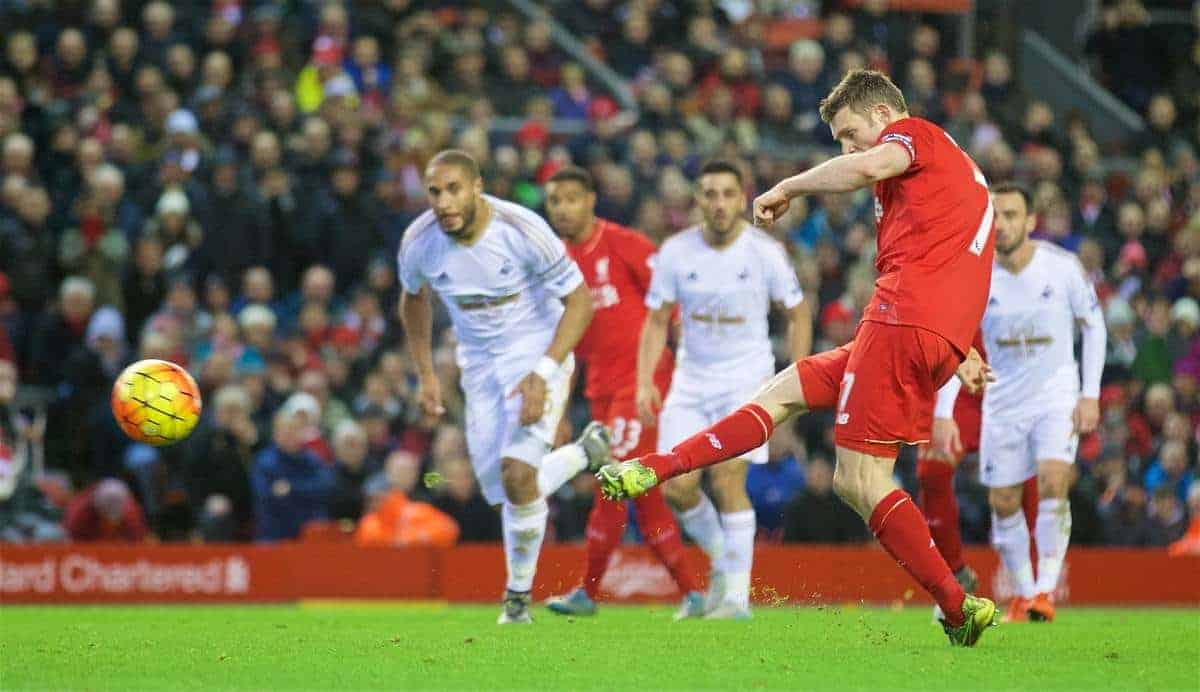 Liverpool beat Swansea City 1-0 at Anfield on Sunday, with James Milner‘s second-half penalty the difference between the two sides.

Jurgen Klopp made two changes to the team that beat Bordeaux 2-1 on Thursday evening, with Martin Skrtel and Adam Lallana replacing Kolo Toure and Joe Allen.

The Reds were given a huge boost with the return of Jordan Henderson, with the captain starting proceedings on the bench.

The same applied to Daniel Sturridge, whose constant injury troubles have been well-documented of late. Philippe Coutinho once again missed out with a hamstring problem.

Klopp’s men were almost in front inside the opening 10 minutes, but Kyle Bartley’s slide tackle saw the ball come back off the post.

It was fairly low-key in the opening stages, despite Liverpool playing some good football and dominating proceedings.

Christian Benteke almost stole in after an eye-catching pass from Emre Can, and Bartley made an excellent block to deny Lallana soon after.

It continued to be one-way traffic as the half progressed, although Swansea did show the odd glimpse of an attacking threat. Can was impressive in his holding midfield role.

Alberto Moreno‘s free-kick curled over the crossbar shortly before half-time, and it proved to be the final moment of note in a forgettable first-half.

Neither side made a change at the interval, as Liverpool looked to go up a gear and earn three vital points.

Ki Sung-yueng fired over for the visitors shortly after the restart, while the lively Jordon Ibe tested Lukasz Fabianski from distance at the other end.

With 61 minutes on the clock, Liverpool were awarded a penalty following a Neil Taylor handball. Milner stepped and converted the spot-kick, just as he did against Bordeaux.

Henderson replaced Roberto Firmino minutes later, with the skipper receiving a rich round of applause as he entered the fray for the first time since August.

Sturridge made his return to action too, coming on for the disappointing Benteke with 19 minutes left.

Milner dragged an effort wide of the Kop goal, as the Reds looked to kill off Garry Monk’s side and avoid a tense finale.

Swansea started to get on top late in the day, with a series of corners and some shaky defending really worrying the home faithful.

Liverpool hung on though, picking up a precious victory in the process. Southampton await next in the League Cup quarter-final on Wednesday.

Man of the Match: Emre Can