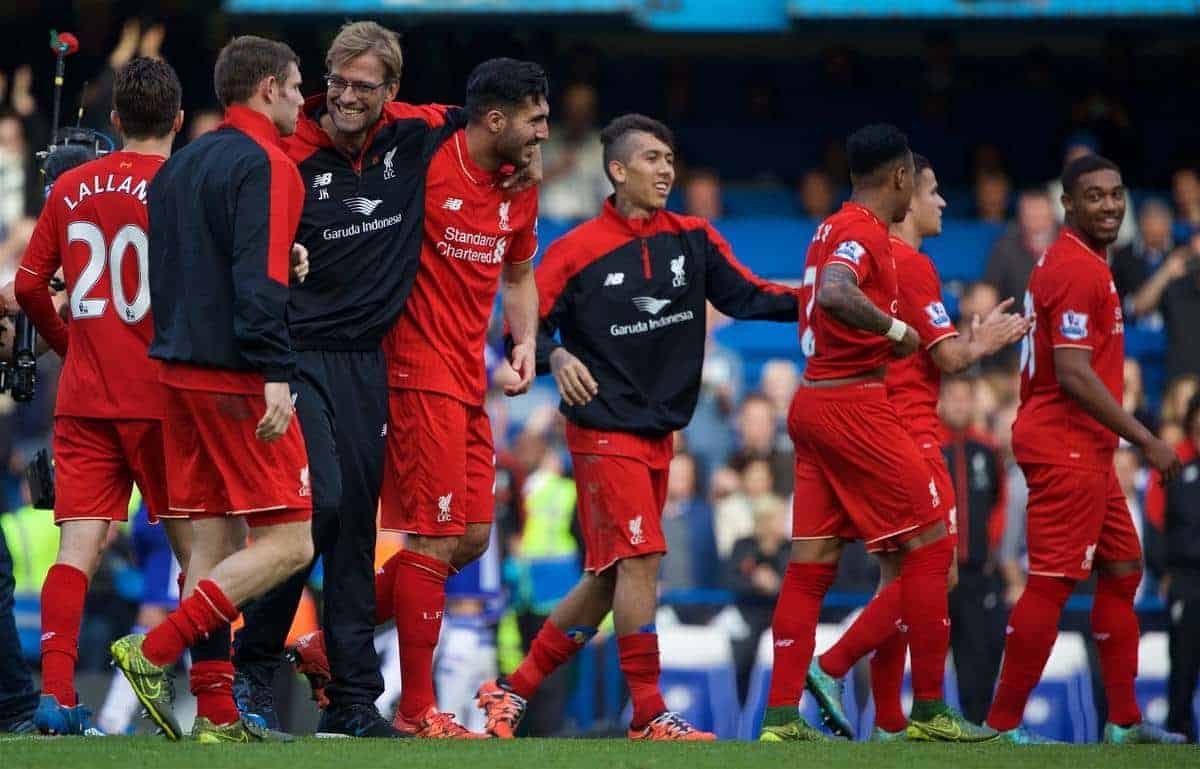 Liverpool are ravaged by injury at the moment, but what would the Reds’ best possible starting XI be with everyone fit? We select ours.

Another weekend, another injury crisis for Liverpool.

Both Mamadou Sakho and Jordon Ibe picked up knocks in the 2-1 defeat to Crystal Palace on Sunday, with the former ruled out for up to two months.

Sakho and Ibe join the likes of Daniel Sturridge, Jordan Henderson, Danny Ings and James Milner on the sidelines, as the injuries continue to mount up for Jurgen Klopp.

With so many players missing, it is impossible for the German to select his best possible starting lineup; something we hope to eventually see happen this season.

Here is who would make our strongest Liverpool XI, assuming everyone was fit and firing.

Simon Mignolet might not be perfect as a goalkeeper, but he remains the undisputed first choice at Anfield.

The 27-year-old has overcome the wretched form that saw him dropped last season, and his performances in 2015/16 have been good on the whole.

There are few better shot-stoppers in the Premier League, but his distribution and lack of aerial dominance do let him down on occasions. Nathaniel Clyne has been a superb addition to the Liverpool side since arriving from Southampton in the summer, banishing memories of the hapless Glen Johnson in the process.

The England international is exactly what the Reds have been missing at right-back since Alvaro Arbeloa left in 2009, with his defensive expertise a welcome addition in that area.

Clyne may not be the most expansive full-back in the business, but he is proving to be as dependable as they come.

Martin Skrtel is now one of Liverpool’s longest-serving players, and he remains the club’s first-choice right-sided centre-back.

The 30-year-old is not everyone’s cup of tea by any means, and can be bettered, but on his day he is a commanding, physically dominant defender.

Having always been very popular with many supporters, Sakho is finally receiving the worldwide credit he deserves.

The Frenchman has become something of a cult hero on Merseyside, and his performances at centre-back have been magnificent this season.

The 25-year-old is far and away the best defender at Liverpool, with his passing, reading of the game and leadership all vital in terms of the Reds’ current and future success. Having fallen out of favour at times under Brendan Rodgers, Alberto Moreno has stormed back into the team in recent months.

The young Spaniard is an infectious player with great potential, and his speed and all-round energy down the left flank give Liverpool a constant outlet.

Moreno is still maturing, and has a number of aspects to his game he must improve on, but he has the ability to be the Reds’ first-choice left-back for many years.

Lucas Leiva has been written off more times than any other Liverpool player over the past decade, but he remains a key man at Anfield.

Injuries may have hampered the 28-year-old’s mobility, but he is still easily the best defensive-minded midfielder at the club, and his understated style of play can be priceless on occasions.

Like a number of players in this team, Liverpool could do better, but for now Lucas is vital for the Reds. The club’s longest-serving player.

Emre Can is a player who divides opinion among Liverpool supporters, but what cannot be questioned is that he is someone with enormous potential.

The 21-year-old German has all the attributes to become a world-class central midfielder in time; he just needs to add maturity and consistency to his game.

Like the kid at school who knows he is better than almost everyone else, Can almost tries to do too much at times. That should change as he matures.

If ever you needed to see how important Henderson is to this Liverpool side, you only have to look at how the midfield has struggled without him.

The skipper is now one of the Reds’ key players, and he remains criminally underrated by many supporters.

The 25-year-old has the dynamism and creativity to be a huge success under Klopp, and his return to the team cannot come soon enough. Just don’t expect him to be as good as Steven Gerrard.

Philippe Coutinho is the most naturally gifted player at Liverpool and, on his day, he is one of the best players in the Premier League.

The 23-year-old has unbelievable creative ability, and an admirable work-rate, and he has scored some stunning goals in his 34 months at Anfield to date.

Coutinho’s form may have been a hit-and-miss this season, but he remains one of the first names on the team-sheet. The club will do very well to keep hold of him over the next year or two.

After a slow start to life in England, mainly due to injury, Roberto Firmino has started to look the class act that many expected him to be when he signed from Hoffenheim in June.

The Brazilian is an incredibly silky, subtle footballer with great quality in the final third, and his intelligence off the ball is also something that doesn’t always receive the praise it deserves.

Firmino has every chance to becoming a special player for Liverpool in the coming months and years.

The 25-year-old is a fantastic footballer, and his importance to this Reds side was perfectly highlighted by his brilliant double against Aston Villa in September.

Sturridge’s finishing is up there with the best in the league, while his movement and creativity are also superb. Liverpool desperately need his injury curse to end.

Do you agree with Henry’s selection of Liverpool’s best XI when fully fit? Let us know in the comments below.