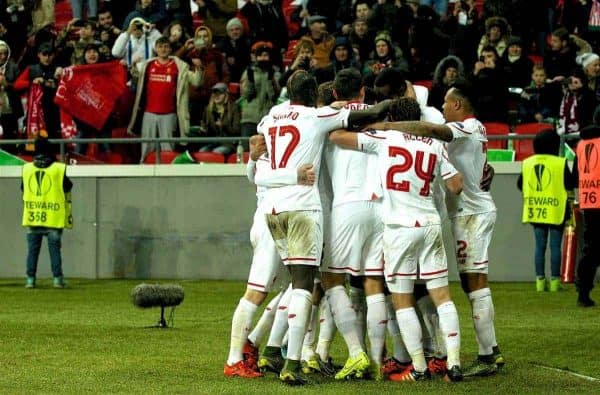 It’s the morning after Liverpool’s narrow victory away to Rubin Kazan. We take a look at how the morning newspapers reacted to the win.

It is now six games unbeaten for Jurgen Klopp in the Anfield hot-seat, with three wins on the bounce representing an undoubted turnaround in fortunes for the Reds.

Jordon Ibe’s maiden Liverpool goal was enough to earn his side all three points in Kazan, and victory in their final two group games will definitely see the Reds qualify for the Europa League knockout stages.

It was yet another encouraging performance under Klopp, whose attention now turns to Sunday’s Premier League clash with Crystal Palace at Anfield.

Here is how the morning newspapers reacted to the win in Russia on Thursday evening.

James Pearce of the Liverpool Echo focussed on the huge difference between Klopp and his predecessor Brendan Rodgers, in terms of their approach in Europe:

What a contrast to a year ago when Liverpool effectively raised the white flag at the Bernabeu and Rodgers stood accused of disrespecting the Champions League when he fielded a heavily-weakened side against Real Madrid.

The Reds’ proud reputation in Europe lay in tatters as the manager prioritised the league fixture with Chelsea.

It was a similar tale when Liverpool headed for Bordeaux in September – half-a-dozen key men left on Merseyside with their feet up – but no longer is Europe treated as an unwanted distraction.

Not under Klopp. The next game is always the most important and momentum was maintained in style as Klopp enjoyed a third straight win and extended his unbeaten start as manager to six games.

The Telegraph‘s Chris Bascombe noted the vast improvements already made by Klopp, with Ibe a perfect example in that respect:

Jordon Ibe’s winner in Kazan took the Klopp Anfield transformation on tour. Ibe was one of several players who looked bereft of confidence and direction a few weeks ago but was exceptional here.

His superbly taken strike on 53 minutes – his first for the club – was symptomatic of the face change so many have undergone over the last six games. Klopp remains unbeaten since he moved to Anfield and now has three consecutive victories.

Moreover, the style and quality is increasingly evident with each win. Liverpool were unrecognisable from the side that played Kazan at Anfield two weeks ago, let alone the Liverpool team that’s limped through Europe for the last few years.

Restoring the sheen on the Liverpool badge abroad is one of Klopp’s many priorities. He can consider this another encouraging development on that fulsome Anfield ‘things to do’ list.

The Daily Mail‘s Dominic King was another who found it impossible not to sprinkle the universally-loved German with praise:

They were becoming as ineffective away in Europe as a domestic plug, bad travellers who would only return home empty-handed.

Liverpool had been without a win on the continent since a 1-0 success at Udinese in December 2012. They had lost four and scrambled two draws from six subsequent matches but now, after an arduous trip to Russia, that miserable sequence is at an end.

The benefits of beating Chelsea were evident in the opening stages. Liverpool began with intent and hemmed Kazan deep in their own half as passes zipped off the bobbly surface from one white Liverpool shirt to another.

It was not perfect but considering how Liverpool were playing six weeks ago, when they seemed to be going through the motions, it was hard to believe this was the same group of players. Has Klopp really made such a difference? Evidently so.

Liam Prenderville of the Mirror was impressed with Emre Can‘s influence in the middle of the park:

Let’s be honest, he was never a defender. For some reason, Brendan Rodgers thought he was though – continually selecting Emre Can on the right of a back three.

He has returned to his favoured midfield role under Klopp and it is no surprise to see him flourishing. In each of Klopp’s games, the German international has been excellent and he continued in a similar vein in Kazan.

Can is clearly vital to the new Liverpool reign with Klopp seemingly building his team around the 21-year-old. Jordan Henderson will be back in action soon, but that shouldn’t impact Can’s role too much.

Clyne– Excellent display from the England full-back, who defended to his usual high standard and also got forward time and again, particularly in the first half. Clyne struck up a good partnership with Ibe down the right flank in preseason, but this was the first time they’d put it together in a competitive game.

Sakho– Excellent once again. Liverpool’s superiority all over the pitch meant that the defence were not worked too hard, but Sakho was commanding when called upon and his distribution from the back was top drawer. His ability to play fast, accurate passes into the feet of his frontmen is an underrated aspect of his game and allows Liverpool to get on the front foot regularly.

Ibe– Brilliant performance from the teenager who had shown in his last two outings that he was back to the form that makes him one of the most exciting young players in the country. He had already been Liverpool’s star performer even before he burst through to score the game’s only goal. This was a display that will make it very difficult for Klopp to leave him out.