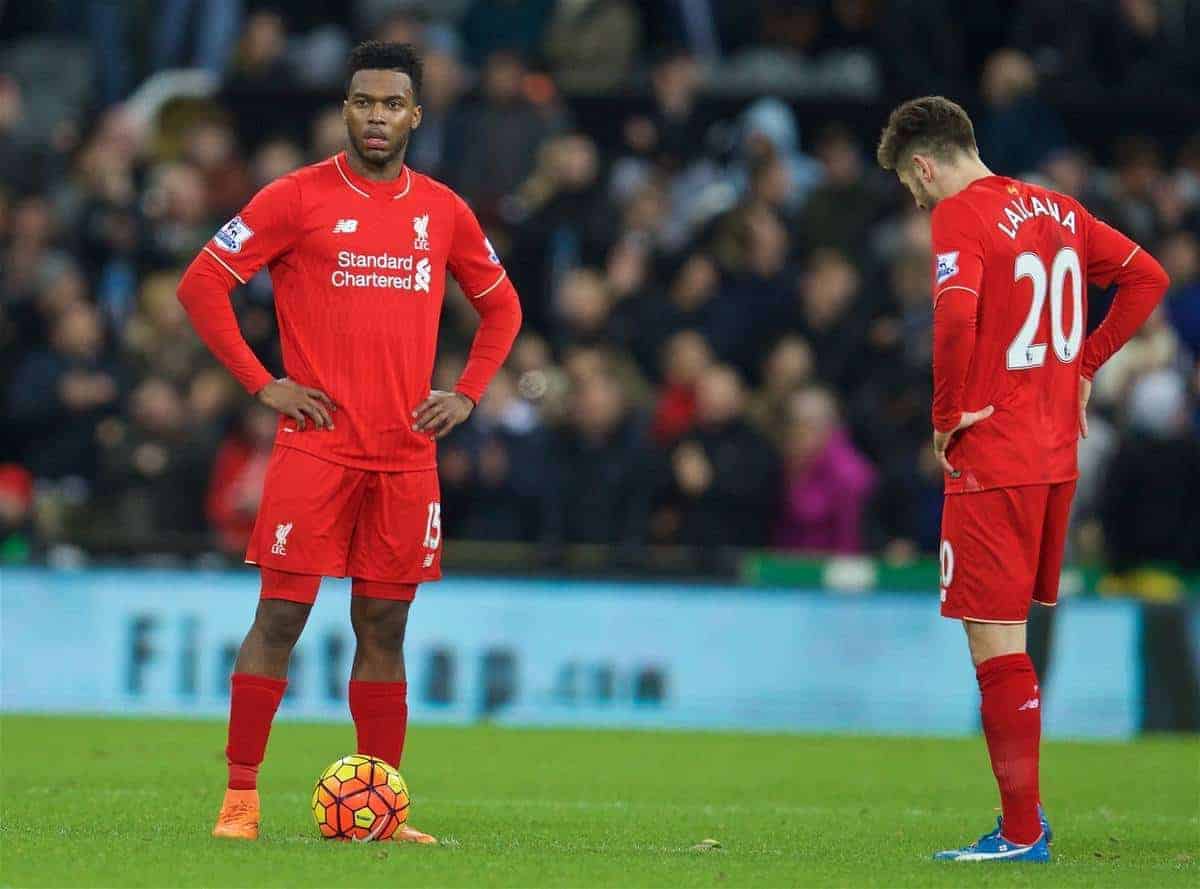 Jurgen Klopp’s Reds slumped to their first defeat for four games with a poor performance and result against Steve McClaren’s battling Newcastle.

A second half own-goal from Martin Skrtel and Georginio Wijnaldum’s stoppage time sealer ensured Liverpool were denied in their pursuit of a fifth straight win in the north east.

It was an afternoon to forget for Klopp’s men who produced their worst performance under the German’s guidance, and here are the talking points from the loss.

It was an afternoon of mixed fortunes for Liverpool’s teenage winger who pleased and frustrated in equal measure.

Ibe has been a rejuvenated figure under Klopp, and his new-found confidence was evident again at St James Park, where the 19-year-old carried Liverpool’s biggest threat for much of the game with his direct running causing problems for the Magpies’ left side.

There was also better movement about his play, drifting into central areas rather than staying wide waiting for service, but for all his effort and endeavour, the teenager struggled with consistently poor decision making and final passes which still evidently needs work.

Ibe may be dribbling, but his end product is absolutely awful.

Too often he was wasteful in promising areas – he failed to make a successful cross in five attempts – letting the home side off the hook when more should have been made of the openings, before his sloppiness saw him replaced by Divock Origi after 74 minutes.

There were positives and negatives for Ibe on a day that showed his improvement and aspects to work on at the same time.

The right-back has been almost impeccable since arriving in the summer, and it was another good display from Clyne against McClaren’s side.

The £12 million man started on the front foot instantly forcing early pressure, and he provided a marauding option all afternoon outside of right flank teammate, Ibe.

Driving from deep, Clyne joined attacking play with some crisp passing into the final third that he then supported with real positive forward runs, providing a second dangerous option for the Magpies left that Liverpool didn’t take advantage of as they should have.

Clyne was sound defensively again too – despite some shaky moments in the defensive third for the Reds as a unit – and he dealt positively with the rare danger that came down his side, making for solid right side.

It was yet another good afternoon on an individual note for the England international and his consitent form must continue in a crucial period of the season.

A lethargic performance lacking quality and fight from Liverpool’s midfield highlighted just how much Klopp’s side miss the German midfielder.

The Reds lacked Can’s presence, drive and energy in the middle of the park  – something Klopp alluded to post-match – with Lucas producing his worst performance under the German so far, Milner showing nothing of note and Allen struggling to impose himself on proceedings as well as he did against Southampton.

There was little forward contribution from the trio, who were overpowered and bypassed too easily by Newcastle’s tenacity in central areas, and Can’s decisiveness in and out of possession was badly missed with Liverpool lethargic all afternoon.

The stale performance showed the importance Can now has in Klopp’s side, and the Reds boss will be looking forward to welcoming back his fellow countryman to the team.

Christian Benteke becoming a real problem with another poor display

The Belgian striker endured another poor afternoon on Tyneside, showing his unsuitability to the Reds who were again worse off for his presence in the XI.

Benteke was totally ineffective from the beginning. He had the least touches of any starting Red (33), cutting a statue-like figure as he watched play go on around him, and he failed to provide a presence in the box – where he missed an absolute sitter – too often stood behind play when Liverpool looked to deliver.

His immobility was counter-productive to the Reds’ pressing game that has become such a huge feature under Klopp – frustrating the German who criticised his side’s lack of pressure in the final third – and he negated the threat of Roberto Firmino too with his lack of movement doing nothing to help the Brazilian.

#LFC still look extremely uncomfortable with Benteke as the starting No. 9. Lacking movement, sharpness, everything.

Benteke’s poor touch and lack of awareness in possession saw Liverpool miss the platform needed in which to build attacks too before he was dragged off after an hour, no doubt for allowing the Premier League‘s joint-leakiest defence a far too comfortable afternoon.

The summer arrival has netted some important and spectacular goals, but they have come at a cost to performances and his presence was extremely unhelpful to the Reds again.

A dreadful defeat at St James’ Park saw the Reds miss a huge chance to continue their positive momentum and close the gap on the Champions League places.

With Man United and Tottenham drawing and Man City losing at Stoke, a huge chance presented itself to Klopp’s men to really perform in a key fixture and pick up a vital three points that would have moved Liverpool to within three points of fourth and six of league leaders Leicester.

But it was a chance that went to waste with Liverpool instead turning in a woeful performance that leaves the Reds little margin for error for the rest of a crucial Christmas period.

It is essential Klopp’s men bounce back against West Brom next week to ensure their good Premier League progress isn’t derailed any further, and pressure is kept up on those ahead with top four certainly up for grabs.