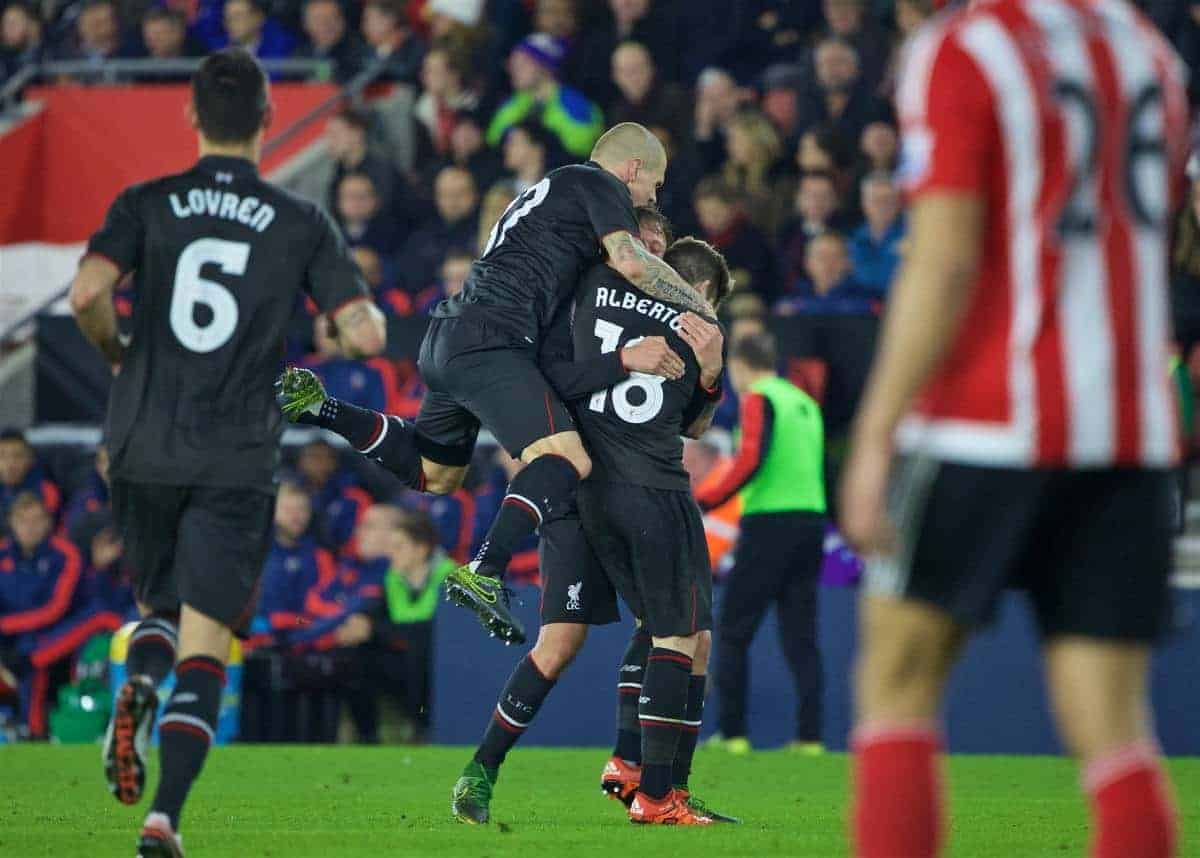 Following Liverpool’s outstanding 6-1 thrashing of Southampton in the League Cup quarter-final, we round-up the best newspaper reaction from the game.

It almost feels like we’re dreaming at times at the moment, as the Reds continue to produce magical performances under Jurgen Klopp.

The way in which Liverpool recovered from going a goal down in the first minute was admirable, and there is belief and quality oozing through the side now.

Divock Origi bagged a hat-trick, Daniel Sturridge produced two expertly-taken goals on his first start since early October and Jordon Ibe also got on the scoresheet.

It was a win that will further inject fear into Liverpool’s Premier League rivals, with the Klopp effect now really in full swing.

Here’s how the morning papers reported on the St Mary’s mauling:

James Pearce of the Liverpool Echo could not stress enough just how influential Klopp is becoming:

A beaming Jurgen Klopp accepted the deafening acclaim of the jubilant 3,000-strong travelling Kop, who could scarcely believe what they had witnessed.

Having ruled at Stamford Bridge and triumphed in such style at the Etihad, Liverpool conquered St Mary’s in the most remarkable of fashions to set up a two-legged semi-final tie with Stoke City in the League Cup.

Somehow – in the space of two glorious months – Klopp has transformed the Reds into the best travellers since Captain Cook was setting sail around the globe.

Liverpool didn’t just beat Southampton, they humiliated them in their own backyard. You have to go back 20 years for the last time the Saints shipped six on home turf.

The Telegraph‘s Jeremy Wilson hailed the class of Sturridge, adding that he should be England’s first-choice striker at Euro 2016 if he stays fit:

Jamie Vardy and Harry Kane have been the Premier League’s two most consistent strikers this season. Theo Walcott was in the best form of his career before his most recent injury, Wayne Rooney has just become England’s record goalscorer and Danny Welbeck is due back in January.

Yet it is still hard to think of a more instinctively dangerous player when he is fully fit than Daniel Sturridge. This was his first start since the beginning of October but there were no obvious signs of rust and, after Southampton had actually dominated the opening 20 minutes, it was his clinical finishing rather than anything more complicated about Jurgen Klopp’s tactics that ultimately swung the tie for Liverpool.

Klopp has handled Sturridge perfectly so far – and sensibly took him off after an hour here – but not before a decisive and timely reminder of his vast qualities.

Dominic Fifield of the Guardian was in awe of Liverpool’s counter-attacking play against Ronald Koeman’s Saints side:

It has taken Jürgen Klopp less than eight weeks to restore all the verve that, only two seasons ago, almost propelled Liverpool to the Premier League title. This was a scorching of Southampton, a display of counterattacking football so ruthless that it was hard not to feel for Ronald Koeman, shoulders hunched as he slumped on the sidelines, while the visitors plundered mercilessly.

Klopp talked himself through the splendour of his team’s attacking display after the match as if desperate to relive their dominance, a smile plastered across his face as, blow by blow, he recalled each incisive move that had cut the Saints to shreds. “We may have to wait a long time to enjoy a football match again as much as we did tonight,” he warned. The German could only chuckle to himself as he relayed the “perfect” pass from Emre Can for Sturridge’s second, or the “super goals” that illuminated the last half-hour when Koeman had gone for broke and poured all his attacking resources on to the pitch.

This was that kind of occasion when the majesty of Liverpool’s counterattacking took the breath away. The only real save Stekelenburg mustered denied Can in stoppage time. Now Klopp, still publicly wary of what awaits at Newcastle United on Sunday, will go into the new year with his team’s conviction fuelled by thoughts of Wembley. The standard set at Manchester City late last month has been maintained. When they play like this, his team appear untouchable.

Aaron Flanagan of the Mirror heaped praise on Emre Can‘s performance, and believes he just needs to find consistency to his game:

It was one extreme to the other for Emre Can. Any manager would have been screaming at him after he let Ryan Bertrand walk past his ‘block’ to cross in for Sadio Mane‘s opener – and he seemed to struggle in the moments afterwards.

He gave away possession and he gave away fouls – something you can scarcely afford to do when playing in his midfield role.

But Can, still only 21, proved that he has all the potential to be a superstar with his succulent assist for Daniel Sturridge‘s second goal, which was arguably the best pass of the season so far.

With the outside of his right boot, he played a cross-field, curling ball over the defenders, perfectly placed for Sturridge to side-foot past the keeper.

And from there, having gained the confidence to showcase what he can do, he began to flourish. Striving forward and strong in tackles, he quickly turned from a scapegoat to being a joy to watch.

Origi- The young Belgian has struggled as a lone frontman this season but was employed as part of a front two for the first time since joining the club and the difference was there for all to see. Began the game brightly enough but initially had to take a back seat to Sturridge. There was some doubt as to whether the goal scored just before half-time should be credited to him or Moreno, but there was no doubt about the two emphatic strikes he bagged after the break.

Allen- Excellent performance from the Welshman, who was one of the few Liverpool players to start the game well. Played his part in turning the game in the Reds’ favour and produced a wonderful pass to send Sturridge clear for the all-important equalising goal. Made way for Henderson late on but can be well pleased with his night’s work.

Lovren- He’s not a popular man on the South Coast after the manner of his departure from Southampton, and his status on Merseyside wasn’t much better until recently. He’s come through a difficult period and is playing very well now. Southampton‘s forward line are a handful for anybody, but Lovren stood up to the challenge and made several timely interventions.

Let us know your thoughts on the game in the comments below. Who was your star man? Can Liverpool win the Premier League this season?