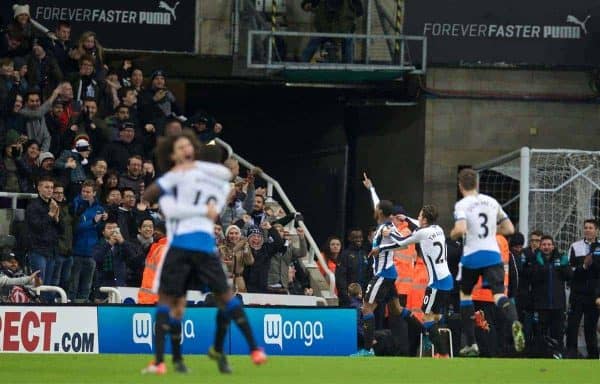 Unpredictability the order of the campaign – 5 Premier League Talking Points

Liverpool’s 2-0 defeat to Newcastle United was not the only surprise of the weekend, with another enthralling round of Premier League action unfolding.

With Liverpool fifteen games into the 2015/16 campaign and licking their wounds after Sunday’s St. James’ Park shocker, Jurgen Klopp still has a lot to learn about the Premier League.

As he mulls over the weekend’s events with his assistants this week, he can take in another unpredictable round of fixtures.

There were surprise wins for Stoke City and Bournemouth, a comprehensive victory for title challengers Arsenal and a host of hard fought draws for West Ham United, Aston Villa and West Bromwich Albion, as the league table began to open up.

A manager’s position effectively becomes untenable when there are clear signs of unrest in the dressing room; a loss of faith among a squad is rarely restored.

But despite Newcastle‘s miserable start to 2015/16, the Magpies’ show of sheer fortitude at St. James’ Park on Saturday showed this not to be the case for the beleaguered Steve McClaren.

“Tomorrow morning when we look at the stats, we’ve got to make sure we can stay win them, or at least outrun them,” the Yorkshireman told Sky Sports before the game.

As Georginio Wijnaldum, Jack Colback, Moussa Sissoko and the rest of his triumphant side crawled off the pitch as exhausted victors on Sunday, McClaren will have been vindicated.

Newcastle were sharper, more aggressive and more incisive than Liverpool on Sunday, with McClaren’s squad desperate to back their manager.

The transformation of Stoke under Mark Hughes has been remarkable, making light of Andy Gray’s assertion that Lionel Messi and Barcelona’s continental talents would “struggle in a cold night at the Britiannia Stadium.”

Moving away from the drab but effective era of Tony Pulis, Hughes has added the likes of Bojan, Ibrahim Afellay, Xherdan Shaqiri and Marko Arnautovic to a fledgling squad and somehow managed to mould them into a prominent Premier League outfit.

These were misfits in the ranks of Barcelona and Inter Milan, but under the tutelage of Hughes they are shining.

Saturday’s 2-0 win at home to Manchester City saw the Potters in fine form, with Shaqiri, Bojan and Arnautovic dovetailing to exploit a lacklustre City defence, further proving their credentials.

Stoke now sit 10th in the Premier League table, but only one point behind sixth- and seventh-placed West Ham and Liverpool, and Hughes will want his side to keep this up throughout 2016.

The most unlikely of league leaders heading into the festive period, Leicester City showed no signs of stopping as they destroyed Swansea City at the Liberty Stadium on Saturday.

With a Riyad Mahrez hat-trick making light work of Garry Monk’s struggling side, the Foxes managed to do what the majority of the chasing pack failed in this weekend; this priceless victory extended their lead at the top of the Premier League even further.

This is no lucky streak, and the inspired leadership of Claudio Ranieri is at the heart of their success.

Mahrez, Jamie Vardy and Marc Albrighton are far from the most fashionable names in European football, but Ranieri has managed to craft a title-challenging side by maximising their talents.

Leicester are now two points clear of second-placed Arsenal and three ahead of City and Manchester United, and this most surprising of runs looks set to continue.

Liverpool welcome Mahrez and Co. to Anfield on Boxing Day, and could well be the underdogs.

While the England international makes a salient point about the fickle nature of modern football supporters, he also rather worryingly questioned the importance of football as entertainment.

For United supporters this season, watching Louis van Gaal’s side has been torture; in their last 10 games they have scored just seven goals.

Smalling’s bold assertion alludes to the fact that United are still getting results—those 10 games have seen just one defeat, on penalties to Middlesbrough in the League Cup.

One minor positive for Klopp to take away from the weekend’s Premier League action is that Liverpool were not the only ‘big’ side to suffer defeat.

City and Chelsea both lost, to Stoke and Bournemouth respectively, while United and Tottenham Hotspur were held to disappointing draws, ensuring that Liverpool’s loss was not as costly as it may have been.

At this stage of the season, there are 12 sides harbouring realistic hopes of a top-six finish, with the unpredictability of the 2015/16 Premier League opening up this possibility.

The likes of City, Chelsea and Liverpool can no longer head to the Britannia Stadium, Dean Court or St. James’ Park and expect victory.

While it may not be the most enjoyable reality for Reds supporters dreaming of a title challenge under Klopp, on pure entertainment value 2015/16 is turning out to be a classic.