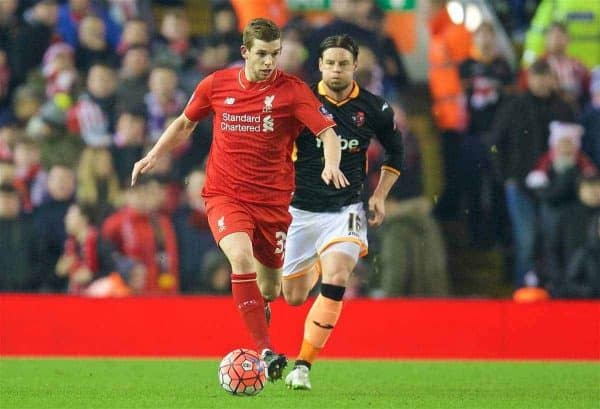 Jon Flanagan makes his first start for Liverpool in 20 months, as Jurgen Klopp names a strong lineup for the League Cup semi-final against Stoke City.

Klopp has previously hinted at a possible start for the 23-year-old, as Nathaniel Clyne suffered a knock to his knee in Saturday’s 5-4 win over Norwich City.

With Clyne having failed to fully recover, Flanagan is included at right-back, after a successful return to first-team action against Exeter City last week in the FA Cup.

In midfield, Lucas Leiva, Emre Can and Jordan Henderson form a three-man unit, in what is likely to be a 4-3-3 formation.

Supporting Roberto Firmino in attack are Adam Lallana and James Milner, with the former replacing Jordon Ibe on the wing.

Firmino is in strong form after having been installed as Klopp’s first-choice centre-forward in recent weeks, and the Brazilian will be hoping to add to his goal tally against the Potters.

Steven Caulker misses out as he is cup-tied for this clash, but Lovren has returned from the hamstring injury he suffered in the first-leg win over Stoke earlier this month.

Taking a 1-0 lead into this clash, Klopp will be confident that this strong, attack-minded side can seal a victory at Anfield.

A final against either Manchester City or Everton awaits the victor.