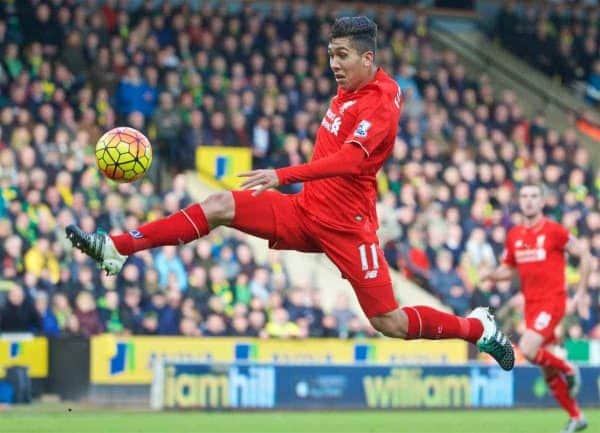 A floating central role for Roberto Firmino helped Liverpool on their way to a remarkable 5-4 win away to Norwich City.

Though there was little in terms of structural integrity for either side at Carrow Road, a particular tactical nuance helped Jurgen Klopp‘s Liverpool to a priceless win on Saturday afternoon.

Making just one change to the side that lost 1-0 to Manchester United the previous weekend, Klopp brought Jordon Ibe into his starting lineup in place of Adam Lallana.

With Lallana short of fitness after a slight injury in midweek, Klopp utilised Ibe’s pace in a 4-3-3 setup.

Ibe was deployed on the left flank, with James Milner operating on the opposite side, supported by a three-man midfield of Lucas Leiva, Jordan Henderson and Emre Can.

While Klopp’s established back four of Nathaniel Clyne, Kolo Toure, Mamadou Sakho and Alberto Moreno struggled to deal with the threat of Dieumerci Mbokani and Steven Naismith, the Reds had little trouble in their attacking third.

This was spearheaded by an inspired performance from Firmino, in his now-regular role as Klopp’s lone centre-forward.

This saw the Brazilian score twice, with his running between the lines particularly evident as he converted following a reverse pass from Milner for the Reds’ opener.

With Liverpool 4-3 ahead with 15 minutes to go however, after further goals from Milner and Henderson, Klopp looked to capitalise, switching Firmino’s role.

Introducing Benteke in place of Henderson, Klopp moved to a 4-2-3-1 formation.

Without the support of Henderson, Lucas and Can adopted a compact structure in the middle of the park, looking to thwart the influential Jonny Howson.

Firmino moved to the left wing, with fellow substitute Adam Lallana supporting Benteke in the No. 10 role, while Milner retained his position on the right flank.

This saw Klopp take advantage of Firmino’s strong work off the ball, and while the 24-year-old will be disappointed not to score a hat-trick, the onus fell on Lallana to provide Liverpool with the win.

In the right place at the right time as the ball fell in Declan Rudd’s penalty area, Lallana surged forward from his central attacking position and drilled the winner into the Norwich net.

Switching to the 4-2-3-1—and tailoring Firmino’s role to the tactical landscape—showed Klopp’s managerial nous.

The German may be frustrated to see his side once again endure such difficulty in the defensive sector, but the impressive performance of Firmino as his No. 9 presented a genuine positive.