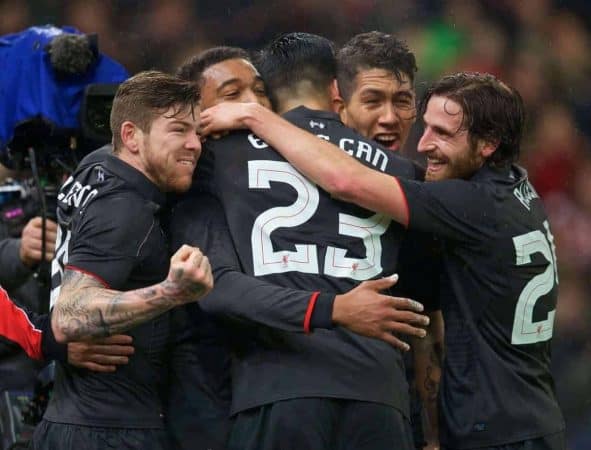 Following Liverpool’s 1-0 win at Stoke, in the League Cup semi-final first-leg, we round-up the best newspaper reaction from the game.

It was an excellent all-round team performance from the Reds, who responded well to Saturday’s limp showing at West Ham.

Jordon Ibe’s well-taken first-half effort proved to be the only goal of the game, and Jurgen Klopp‘s men are now strong favourites to reach the final at Wembley next month.

The win was slightly marred by yet more injuries, however, as Philippe Coutinho and Dejan Lovren both succumbed to hamstring injuries. Liverpool have now suffered 12 injuries of that kind under Klopp.

All in all, though, it was a very positive night, with the Merseysiders overcoming an increasingly talented Potters side.

James Pearce of the Liverpool Echo felt it was the heart shown by Liverpool that stood out on the night:

Talk about triumphing in the face of adversity. Liverpool moved to within sight of a Wembley final on a stirring night at the Britannia Stadium.

If anger was Jurgen Klopp‘s overwhelming emotion after the Reds’ spineless defeat at Upton Park on Saturday, this time it was pride as his heavily depleted side secured the gutsiest of victories over Stoke City.

The job must still be completed in the second leg of the Capital One Cup semi-final on January 26 but showcase these same qualities again and a reunion with Anfield South awaits.

Klopp had demanded a response from his under-achieving players and he got it as they secured a prized advantage courtesy of Jordon Ibe’s first-half strike.

The outcome was all the more remarkable considering the cards dealt them during a night when Liverpool’s injury problems reached crisis point.

The Telegraph‘s Sam Wallace focussed on the Reds’ injury problems, and admits some January transfer business now looks likely because of it:

A Liverpool performance he would have hoped for, by a Liverpool team that he was forced to select – especially the patched-up injury-racked side that finished the game. Klopp’s major injury crisis was compounded by the loss of Philippe Coutinho and Dejan Lovren to hamstring problems in the first half with Kolo Touré ending the game trying to rub away the cramp.

The Liverpool manager conceded afterwards that he would have to amend his approach to training, with too many casualties now from his high-intensity demands to add to the injury problems he inherited. By the end of the game Klopp had been forced to improvise with Lucas Leiva and Emre Can as his two centre-backs, the latter having started the match as the team’s No.10.

By the time this Capital One Cup semi-final’s second leg comes around on Jan 26, Klopp will hope that some of the legion of injured players will be back in contention. He had lost Mamadou Sakho before the game and is also without Jordan Henderson, Daniel Sturridge, Danny Ings, Joe Gomez, Divock Origi and Martin Skrtel, all of which prompted Klopp to have a rethink about the January transfer market.

The Guardian‘s Jamie Jackson believes Liverpool’s lack of goals, and a striker who can be relied upon, remains an issue:

The headline number hanging over this Liverpool side as they arrived was their 22 goals in 20 league games. This is the poorest return since the club was founded 124 years ago and while Klopp took charge in early October he has overseen 11 of these matches, in which 15 strikes is the count.

When Philippe Coutinho limped off in the first half the lack of confidence Klopp has in his one fit striker was illustrated by him refusing to put on Christian Benteke. Instead, Jordon Ibe entered and it was the youngster who scored first. This vindicated the manager in one sense yet despite dominating for long periods Liverpool never appeared likely to pile up the goals.

If Klopp has little faith in Benteke then Daniel Sturridge has to end his injury nightmare soon or the German should start searching for an another who can do the business game-in, game-out at the business end of the park.

Dominic King of the Daily Mail spoke about the impressive reaction of the team, having reportedly received a rollocking from Klopp at the weekend:

So this is what happens when they make him angry: three days spent working with a team who looked like duds and suddenly Jurgen Klopp is 90 minutes from Wembley.

If Upton Park provided the lowest moment of Klopp’s brief Liverpool reign, the transformation he oversaw in the 72 hours before the start of this Capital One Cup semi-final first leg was stark.

This performance was as unexpected as the identity of the man who provided the only goal. Jordon Ibe has certainly not been prolific since he broke into Liverpool’s team but he came off the bench to secure a crucial advantage.

Fitness issues may have provided a sour footnote but the 90 minutes that preceded this were superb. This was not as eye-catching as their 4-1 slaying of Manchester City but it was just as noteworthy.

They were impressive performances in Reds shirts everywhere you looked on Tuesday, but ESPN‘s David Usher rated Lucas Leiva, Kolo Toure and Roberto Firmino as the best on the night:

Lucas (9/10) – Began the game in midfield and impressed by snapping into challenges and distributing the ball quickly. Pressed into emergency duty at centre-back following the injury to Lovren and did a magnificent job in an unfamiliar position.

Toure (8/10) – Outstanding display from the veteran Ivorian. He used his vast experience to good effect in anticipating and clearing danger. Made numerous headed clearances and put his body on the line late when Stoke were pressing for an equaliser. Appeared to pull his hamstring in the closing stages and was a virtual passenger in stoppage time as Emre Can had to drop into the back four.

Firmino (8/10) – Much improved display from the struggling Brazilian. He was bright and inventive and set the tone for Liverpool’s excellent first-half pressing by nicking the ball off defenders on several occasions to turn defence into attack. The only thing that let him down was his wayward shooting, but otherwise it was an encouraging performance.