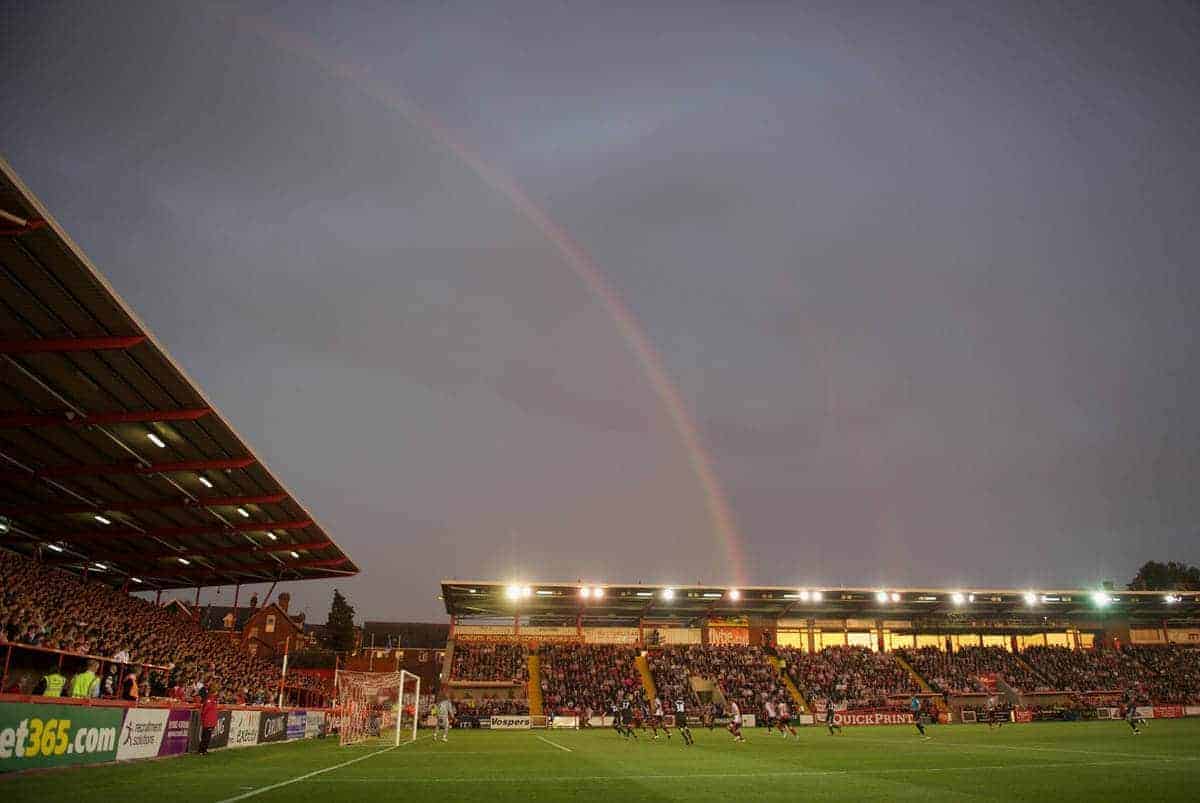 Liverpool continue cup action on Friday night when they make the long trip to Devonshire for the first FA Cup clash of the season against Exeter City. The relentless run of games continue for Liverpool with Friday’s fixture the third in ridiculously quick succession, but before even managing the game, Klopp has a job on his hands in finding an XI to play as the injury crisis worsens with 12 players now missing.

For the second successive season, the Reds begin their journey to Wembley against League Two opposition having faced AFC Wimbledon last year, and after just squeezing past the Dons with a narrow 2-1 win, Liverpool can expect a similarly tricky tie against Paul Tisdale’s men.

Friday night will see just the sixth meeting between the clubs, in which Exeter will be looking for a historic first success over the Reds who have won all of the five previous clashes.

Four of those games have come in League Cup competition and only one in the FA Cup – that coming in 1950 at Anfield where the Reds ran out 3-1 winners.

The last fixture between the two clubs was a lot more recent, coming in August 2011 when Kenny Dalglish’s side recorded a 3-1 success in the League Cup 2nd round on their way to winning the competition.

Goals from Luis Suarez, Maxi Rodriguez and Andy Carroll that day put the Reds in firm control, before Daniel Nardiello grabbed a consolation from the spot for City with 10 minutes remaining.

Klopp will be looking to make it six wins from six against the Grecians on Friday night.

Exeter have endured a difficult season to date, currently sitting in 16th place in the fourth tier.

The home side arrive following four straight defeats and having won only two of their last 10 games, but as proven time and again when it comes to the FA Cup, form counts for nothing.

In an indifferent league campaign, the Grecians have enjoyed the distraction of the competition, posting comfortable wins over non-league Didcot Town and Port Vale to land the round three glamour tie against the Reds.

Tisdale’s men have also caused panic for a Premier League side already this season, putting up a brave fight before eventually losing 6-3 to Sunderland in the League Cup in August.

Liverpool’s indifferent form continues, but Klopp’s men arrive in better shape having collected three wins from their last four games in all competitions.

The Reds will be looking to continue that positive run with a makeshift side at St James Park, to ensure of some positive momentum before successive tough league games.

Klopp’s men are of course the favourites, with progression to round four priced at 4/9, while a draw is valued at 7/2 and a giant-killing for Tisdale’s men available at 13/2.

Tisdale – the second longest serving manager in the English game – like Klopp, comes into the match with a number of injury concerns that have plagued his season to date.

The City boss faces an anxious wait over the availability of key man David Wheeler who has a foot problem, while the match is likely to come too soon for Christian Ribiero, David Noble and Jamie McAllister to feature.

Long-term absentees Christy Pym, Ryan Harley and Will Hoskins are also set to miss out.

Former Republic of Ireland striker Clinton Morrison who signed an extended contract last week, and fan-funded singing Joel Grant, who joined after supporters group ‘1931’ raised £30,000 to secure his services, are both in line to feature.

Exeter boast some quality in their ranks with the duo and Lee Holmes in particular, while the Reds will need to keep a closer watch on top scorer Tom Nichols.

Tisdale’s men are a good footballing side, but with the game set to be a battle on the difficult St James Park pitch, the tie could be won or lost on the desire of Klopp’s men rise to the challenge.

Klopp spoke of his respect for the FA Cup, injury crisis, and on Friday’s opponents in his press conference:

“The FA Cup is a big tournament for sure. I have big respect for it.

“We watched Exeter yesterday, we know that they’re a good team. I heard the dressing room is quite small. Maybe we should not spend too much time in there and go out and play football!

“The team which plays tomorrow will want to win this game 100% but it will be a team that didn’t play too often together.”

Prior to the Reds’ visit, an ambitious Tisdale said:

“We are not just looking to sit back and hold on. I don’t want to do that. I think we need to have some intent about us. I don’t think we should hold back and wait for the game to happen.

“We need to go out and give it a go and get the balance right between risk and reward. Win, lose or draw we want to finish the game having given a good and positive account of ourselves.”

The cup clash will be a rare game of live coverage on BBC One in the UK, with the match also available to watch on SuperSport, beIN Sport, Canal+ and Fox Sports 1 around the globe.