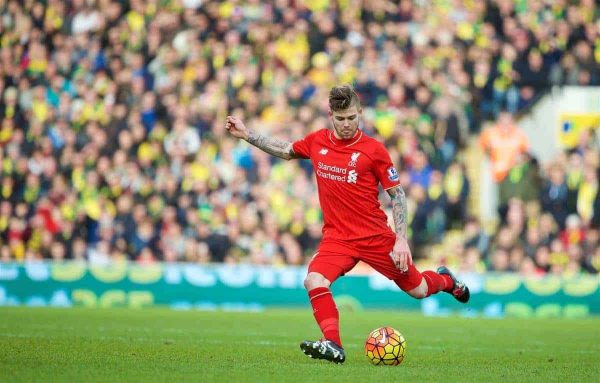 Does Alberto Moreno risk losing his place to Jon Flanagan or Brad Smith?

Alberto Moreno produced another brain-dead moment against Norwich City on Saturday, but is he in danger of being axed by Jurgen Klopp in the coming weeks?

Liverpool’s incredible 5-4 victory at Carrow Road see-sawed from the bizarre to the sublime at times, with Jurgen Klopp‘s men nicking all three points with almost the final act of proceedings.

While the match will always be remembered for its frenetic pace, slick finishing and woeful defending, one moment of sheer stupidity really stood out from a Reds point of view.

With Liverpool 2-1 down and in desperate need of some calm heads, Moreno not only got himself horribly out of position, but then proceeded to give away a penalty for a mindless tackle on Steven Naismith.

The fact that he fouled him once and got away with it, before going back for more, made it all the more difficult to fathom.

It was a moment that left the travelling Kop apoplectic with the Spanish left-back, and as Wes Hoolahan stroked home the spot-kick, the general feeling was that Moreno had inadvertently put the game out of his side’s reach.

Fortunately for him, Norwich decided to implode, allowing Liverpool to go 4-3 up, and although for a minute or so it looked like the Canaries had snatched a point, Adam Lallana scored a goal of high drama right at the death.

As the Reds players, fans and coaching stuff celebrated wildly in East Anglia, few would have been breathing a more hefty sigh of relief than Moreno.

All of a sudden there is competition in his position, and there are some, including the Liverpool Echo‘s Luke Traynor, who feel his place in the team is not as secure as it once was.

Moreno has had a good season on the whole, and having fallen out of favour during the end of Brendan Rodgers’ reign, he has really shone under Klopp.

The attacking thrust he brings down the left flank has helped give Liverpool an extra dimension, with his electric speed and ability to link with others particularly eye-catching.

No defender in the Premier League has created more chances for teammates so far in 2015/16, which is a statistic that should be respected.

His final ball needs to improve though, especially when he has more time on the ball. Moreno thrives most in the attacking third when he doesn’t have time to think about what he is doing.

Although the former Sevilla man has undoubtedly improved as a defender this season, question marks still remain about him in that area.

His ludicrous challenge on Naismith was not a one-off moment of defensive ineptitude, as the eventual wins at Chelsea and Southampton earlier this season showed.

Moreno was guilty of switching off at the back post in both games, allowing Ramires and Sadio Mane to head home, respectively, and he deservedly received plenty of criticism for it.

The 23-year-old is still yet to fully convince when it comes to the more gritty side of things, but the hope is that he improves with age.

Until now, Moreno has simply had to be an almost ever-present at left-back, due to a complete lack of depth in that area.

A long-term injury to Joe Gomez saw him recalled early on in the campaign, and with Jon Flanagan also sidelined with chronic knee trouble, Moreno was very much undisputed first choice.

Now things have changed, however, and there is suddenly more competition for places.

Flanagan has finally made his long-awaited return, and following his heroic performances in 2013/14, Klopp will surely see him as an important player in the long-term – assuming those injuries haven’t hampered him too much.

Meanwhile, the emergence of Brad Smith in recent weeks has come completely out of the blue.

The young Australian impressed greatly in both FA Cup ties against Exeter City, scoring in the original showdown and creating Joe Allen’s goal in the replay, with his general all-round quality evident.

Not many would have predicted this sudden rise from Smith, particularly anyone who saw his woeful cameo at Chelsea back in 2013.

Moreno vs. Flanagan vs. Smith

The question is: How much pressure is Moreno under now?

The return of Flanagan acts as a huge boost to everyone associated with the Reds, but he is not even close to being able to be relied upon week in, week out yet.

It will understandably take time for the Englishman to regain his sharpness, and Klopp will no doubt be careful when it comes to easing him back into the team.

He still needs a few more substitute appearances – and perhaps even another run-out for the Under-21s – before he can be considered to start for Liverpool.

Smith poses a bigger threat to Moreno in the short term, and the quality of his final ball in the last month or so has definitely been superior to his teammate’s.

It should be stressed that the Australian has only really been tested against lower league opposition, though, and could easily be found out against Premier League wide men.

Moreno is not a player that Liverpool fans find universally easy to warm to, but he is a very popular player in general.

He has huge potential, and while these defensive errors and moments of sheer madness need to start being eradicated, Klopp must surely still see him as first-choice left-back.

Calls for Moreno to be dropped all feel a little knee-jerk, especially when the replacement options are not wholly convincing, for differing reasons.