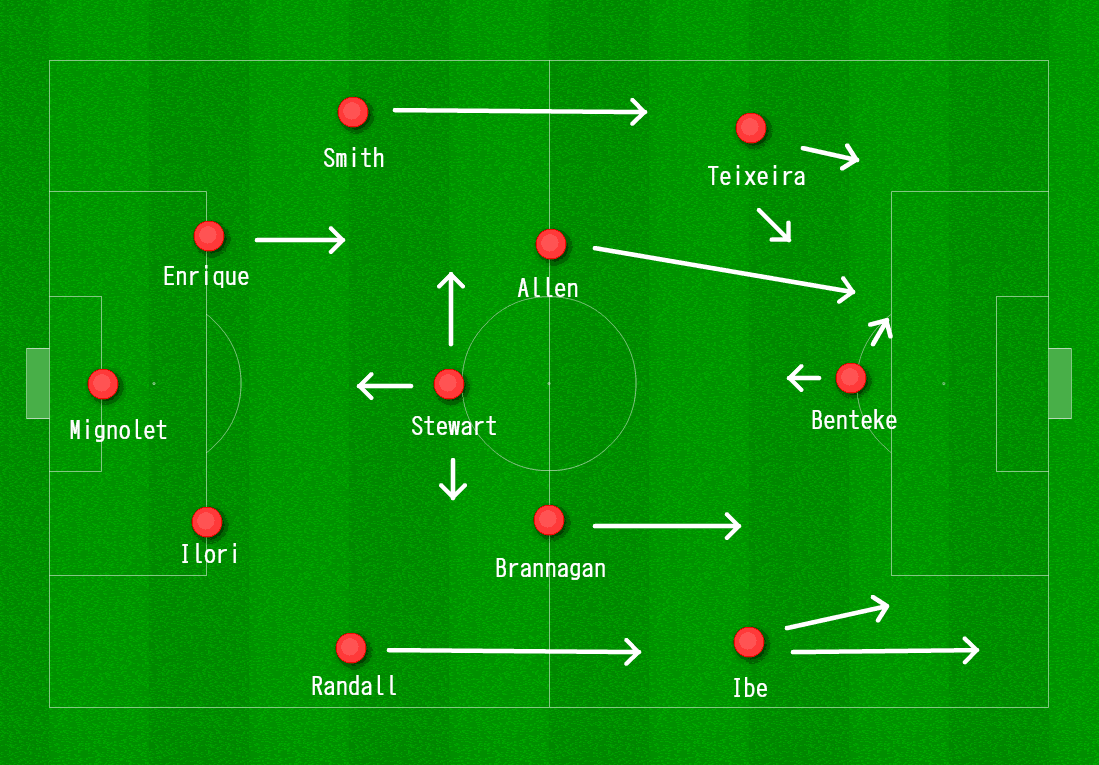 A pair of tried and trusted formations saw Jurgen Klopp‘s Liverpool waltz through to a fourth round of the FA Cup with a 3-0 win over Exeter City. After being held to a 2-2 draw by a spirited Exeter side at the first time of asking, Klopp ensured that his side would not be overcome in Wednesday night’s replay.

Though the German made just three changes to the side that played out the stalemate at St. James Park, his tactical work assured dominance.

Klopp brought in Simon Mignolet for Adam Bogdan, Joe Allen for Ryan Kent and Jordon Ibe for Jerome Sinclair, giving his side a more experienced edge—his choice of captain however, Jose Enrique, left a lot to be desired.

Allen stationed himself in the centre of midfield alongside Kevin Stewart and Cameron Brannagan, with Klopp fielding a 4-3-3 formation from kickoff.

In this three-man midfield dynamic, Stewart served as the holding midfielder while Allen and Brannagan pushed forward towards the edge of the penalty area.

This allowed Allen in particular to dovetail with Ibe, Joao Carlos Teixeira and Christian Benteke.

Allen and Benteke were both involved in Liverpool’s first goal, with a strong overlapping run from left-back Brad Smith, combining with Benteke with a neat one-two, finding Allen in the perfect position to put his side 1-0 up.

Heading into the interval with a comfortable lead, it wasn’t long before Klopp altered his setup. With Ojo joining Teixeira, Ibe and Benteke in attack, Liverpool switched to the 4-2-3-1 formation that has become familiar to supporters in recent weeks.

Ibe moved over to the left flank and Teixeira adopted the No. 10 position, with Klopp deploying Ojo in an intriguing role on the right.

The youngster played a part in Smith’s equaliser at St. James Park after driving to the by-line on the left wing, cutting a low cross into the box with his stronger left foot, but at Anfield, Klopp had other ideas.

With Ojo picking up the ball just inside the Exeter penalty nine minutes after he was brought on, he was able to cut inside and curled a sumptuous effort over Bobby Olejnik and in.

Exeter manager Paul Tisdale will have been disappointed with his side’s lack of impetus in attack.

But the long-serving 43-year-old and his plucky Grecians outfit were simply outclassed by their Premier League opposition; tactically, Klopp played this replay perfectly.