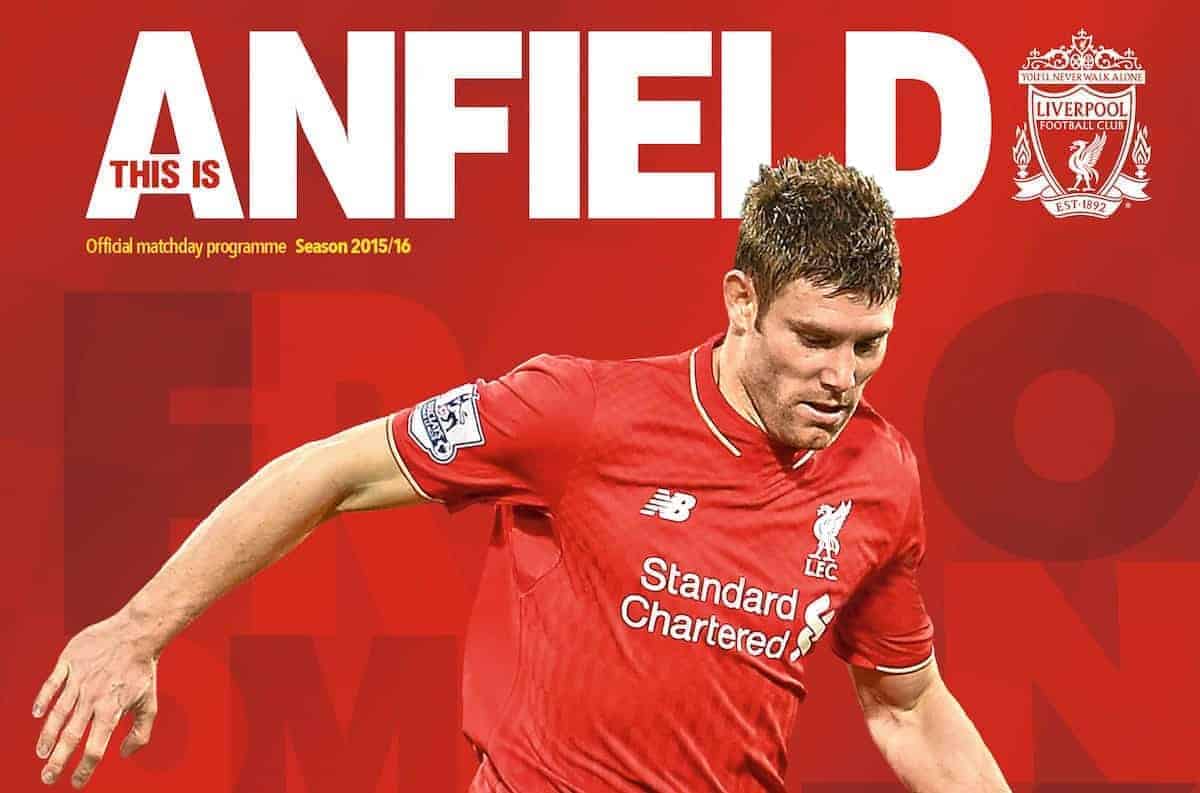 Given some of his manic touchline celebrations during run-of-the-mill Premier League games, I’m half expecting Jürgen Klopp to grab Louis van Gaal’s clipboard and go body surfing past the Paddock if Liverpool take the lead on Sunday.

Our German boss enjoys seeing his side score more than some people sat in the stands and that genuine passion is one of his most endearing qualities.

His displays of raw emotion are in stark contrast to van Gaal who is rooted to the spot so much during games that I’m beginning to think he used to coach Chris Kirkland in the art of facing direct free-kicks. Quite what LVG has in that folder – apart from a menu for the local Chinese – I’m not sure, but whenever United score he opens it and makes a note. He must have the least used pen in the country.

However, despite van Gaal leaving United fans feeling flatter than his nose with insipid displays that make David Moyes’ brand of football look more entertaining than the Brazil side of 1970 taking on a team of fire-breathing jugglers during mardi gras, his record against Liverpool reads Played 3: Won 3. Which is a run than needs to be brought to an abrupt halt at Anfield on Sunday in what is arguably a must-win game for Liverpool.

At the start of the season, confronted with a list of away fixtures that Fergie himself must have personally selected for LFC, numerous Kopites – myself included – said something along the lines of ‘if we can get through those games with a decent haul of points then we’ll be in good shape because all the big teams have got to come to us in 2016’. And they’ve started coming.

For a man who’d just seen his side ship another late Anfield equaliser, Arsene Wenger seemed rather content with a 3-3 draw on Wednesday and you can bet van Gaal would be happy with a 0-0 draw on Sunday, the kind of result he’ll have dreamt of on Saturday night, but another draw wouldn’t be a great result for the Reds, though.

In what is turning out to be one of the most random Premier League seasons of the lot, it seems likely that results against other sides in contention for the top four will decide who gets the glorious prize of a Champions League qualifier in Serbia next August – and having propelled West Ham into the race by giving them six points and taken three points from three games against Arsenal and Spurs, Liverpool need a few more performances and wins like we got against Manchester and Leicester City to remain in contention.

I hope, however, the players have learned a lesson from last season’s 2-1 Anfield defeat to the Mancs. As much as you want to forget 2014/15, Brendan Rodgers’ side went into that match – played on March 22 – having won 10 and drawn two of their previous 12 Premier League encounters. The Reds were fifth, two points behind the fourth-placed Mancs and three points behind third placed Arsenal.

It felt like we had the momentum to turn van Gaal’s side over and rise above them in the table having been 10 points adrift on Christmas Day. Instead we got lethargic, passionless first half-display followed by Steven Gerrard trying to overcompensate for his teammates’ lacklustre efforts by getting sent off 38 seconds after coming on at half-time for leaving one on Ander Herrera. The season unravelled after that.

A 4-1 defeat at Arsenal followed and before you knew it we’d failed to turn up for an FA Cup semi-final against the worst Aston Villa side in (Doug Ellis’s) living memory, lost at Hull, capitulated against Crystal Palace and Stoke and finished in 6th, eight points behind United. And they were bog average last year. At best.

Two lessons must be learnt from that match. Firstly, Liverpool must start quicker on Sunday. Get after United. Put them under pressure. And shift the ball quickly. Klopp’s full-throttle football, his penchant for gegenpressing and the noise such commitment will whip up in the stands should mean that is guaranteed, but equally important is the necessity for his players to keep cool heads in the heat of battle. Jordan Henderson is crucial to that.

Because of the injuries he has suffered this season, it has been impossible to fairly assess Henderson’s value as a Liverpool skipper so far. He has started only seven Premier League games in 2015/16 and while our record of four (1-0) wins, two (2-2 and 3-3) draws and one defeat (did we really lose 0-3 at Watford?) reads favourably, his influence as a captain is harder to ascertain.

Liverpool versus Manchester United is one of those fixtures when you need your key players to perform if you’re to win and while the Mancs’ midfield is so pedestrian at times that Bastian Schweinsteiger only crosses the pitch when he sees a little green man flashing, I think Sunday’s game will be decided by whoever wrestles control of the midfield.

If Henderson is at his energetic, buzzing, yard-covering best then he, aide and abetted by (probably) James Milner and Emre Can, can win that midfield battle and give Liverpool’s front three a platform to play off. But Henderson also needs get it into his team-mate’s minds that rash tackles could prove costly and to avoid making the kind of impetuous challenge that got him sent off against Manchester City a couple of seasons back (and, to a certain but ultimately unknown extent, harmed the Reds’ title challenge due to his subsequent suspension).

That he hasn’t made a similar challenge since – or even been booked since March 2015 – suggests to me it won’t be an issue, not has there been a sending off since Klopp took over with the manager himself perhaps coming the closest to getting dismissed for giving fourth officials an ear-bashing.

But this is Liverpool v Man United, a fixture notorious for red mist leading to red cards and a clash in which a captain’s display, good or bad, can be significant in deciding the outcome, something Steven Gerrard – and Nemanja Vidic for that matter – can testify to.

• Chris McLoughlin writes for the official This is Anfield matchday programme, on sale at the ground, in LFC club stores and from www.sportmediashop.com.