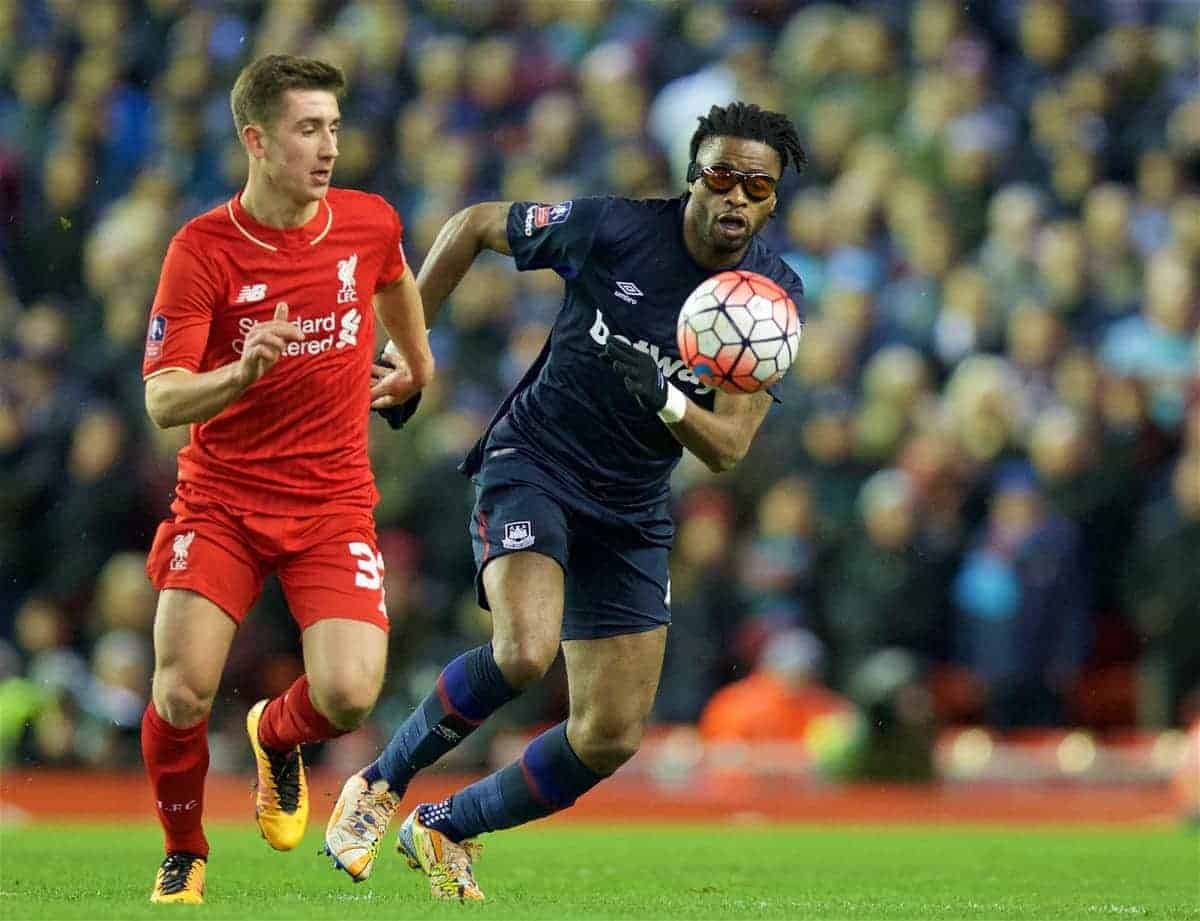 In a tense FA Cup outing at Anfield, neither Liverpool or West Ham United were able to find an opening, resulting in a drab 0-0 draw.

After 120 minutes of action and a penalty shootout on Tuesday night, Jurgen Klopp prepared his side for another cup clash on Saturday evening, taking on West Ham at Anfield.

With his senior stars pushing themselves to the limit against Stoke City in the League Cup, Klopp turned to his youngsters for this latest outing.

The German made 10 changes to the side that secured progress to the League Cup final, with only Simon Mignolet keeping his place, while Joe Allen wore the captain’s armband.

Liverpool looked to push West Ham back early on, focussing on the talent on their left flank, with both Brad Smith and Cameron Brannagan sending well-weighted deliveries into the penalty area.

The Hammers gained dominance soon after, looking to drive at the Liverpool defence, but with a lack of a quality final ball, Mignolet went untested in the first 10 minutes.

Jordon Ibe looked to capitalise on a sloppy West Ham attack with a pacy counter-attack, and after a nice one-two on the edge of the area, sent a low cross into the six-yard box that almost saw Christian Benteke grab the opener, but the ball was nipped off his boot.

Benteke went closer a minute later, aiming a glancing header towards goal following a Brannagan free-kick, but Darren Randolph was on hand to collect.

Brannagan excelled in his midfield role in the first half, and he came close to giving Liverpool to lead on 34 minutes, but his powerful long-range effort was tipped wide by Randolph.

As the first half came to a close, Pedro Obiang looked to replicate Brannagan’s attempt, hammering a volley towards Mignolet’s goal from range, but the Spaniard saw the ball drift wide of the post.

This proved to be the last significant opening of the half, as Martin Atkinson blew for the interval with the scores level.

The second half kicked off with a goal-line scramble following a free-kick from Dimitri Payet, but unlike the Reds’ set-piece approach of late, Klopp’s defence were able to make the clearance.

Neither side were able to inject some much-needed energy in the first 15 minutes after the break, but Liverpool soon grabbed the initiative.

A strong burst from Nathaniel Clyne laid the ball on for Allen, but the captain blazed his 18-yard effort well over, before Benteke found the 25-year-old in the area minutes later, only for Allen’s cutback to be blocked.

Joao Carlos Teixeira was next to test Randolph, sending a piledriver towards goal from the left-hand side of the box, but the Republic of Ireland international was more than match for it.

Liverpool had a penalty call dismissed by Atkinson as the game entered its final 15 minutes, with Allen pushed in the box as he lined up a bicycle kick, before Teixeira and Ibe squandered the resulting chance as the ball fell.

Benteke then wasted a promising opening with Randolph sprawling, attempting a low shot when a pass to Teixeira would have given the Portuguese an open net to pass into.

West Ham threw everything at Liverpool as the tie drew to a close, while Klopp made a bold move by bringing on pacy youngsters Sheyi Ojo and Jerome Sinclair.

But neither side could fashion a dangerous opening, and Klopp and Bilic will now prepare their sides for a replay at West Ham‘s Boleyn Ground.