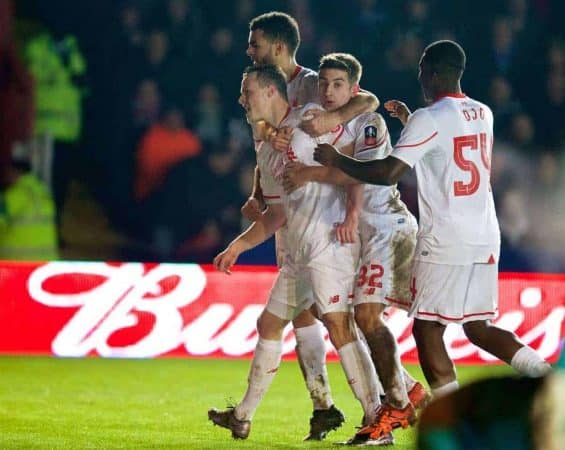 Following Liverpool’s FA Cup third round draw at Exeter City on Friday evening, we bring you the best social media reaction from during and after the game.

This was always going to be a tricky game, considering just how young Liverpool’s starting eleven was, and Jurgen Klopp will be relieved in some ways that his side earned themselves a replay in Devon.

For a while, it looked as though Adam Bogdan’s dreadful error was set to knock the Reds out of the FA Cup, but Brad Smith’s second-half equaliser spared the Hungarian’s blushes.

It was the senior figures of Bogdan, Jose Enrique and Christian Benteke who disappointed most, frustratingly, but the youngsters did themselves proud under immense pressure.

There was much reaction to what was a hugely inexperienced, almost unrecognisable Liverpool starting eleven:

That is a crazy #LFC line up. Benteke looks like the pied piper leading them on their jogs in their warm up.

8 of the @LFC squad this evening are 19 years old and under, with only 3 players being over the age of 22.

I'm genuinely confused by the fact that in an #lfc side full of youngsters I'm most concerned about its two most experienced players.

That Liverpool lineup is like when Football Manager inexplicably schedules a cup fixture in the international break. #LFC

A goal for either side in the first 15 minutes saw Twitter as lively as ever:

We're losing to a team managed by Michael Stipe. This is hilarious.

Sinclair instantly moves above Benteke in the strikers list.

That botched clearance by the Exeter player was a doozy!

Bogdan’s error just before half-time, in which he allowed Lee Holmes’ corner to go straight in, left many bemused at the interval:

Bogdan should just retire at half time. Find a farm in Exeter and live off the land.

Come back Brad Jones, all is forgiven…

Bogdan close to a howler-per-game ratio. Takes some doing.

Adam Bogdan was the 3rd choice goalkeeper at Bolton and yet Brendan Rodgers thought he was good enough to be our 2nd.

Following the game, supporters gave their assessments of the performance:

Out of that eleven, who gets any credit at all? Texeira for the first half? Ojo. And that's it. Dreadful.

Brad Smith and Cameron Brannagan were good tonight. Exciting talents. Still in the competition, lots of injuries. Not the end of the world.

liver1 on the forum:

Jeez, Benteke looks like the weak link in THIS team.

Well done Exeter. Well done most of Liverpool’s kids and reserves. Well done too in no senior players getting injured.

Joke of a pitch, joke of a lineup… Well done kids :) good resilience all round

Should have started Benteke.

Sweeting on the forum:

That was great! The youngsters all gave an excellent account of themselves.

Really delighted this set of young #lfc players will have the opportunity to play again at Anfield, and on a surface more to their liking.