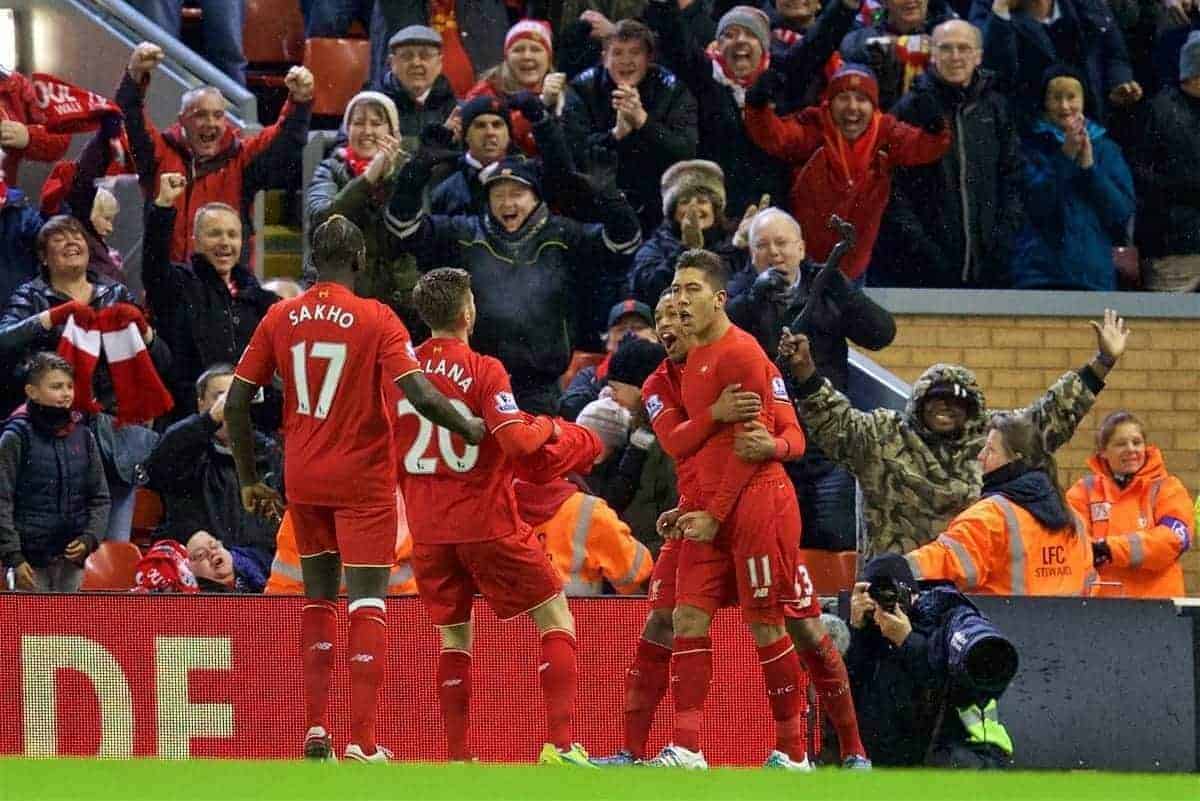 Liverpool battled back to claim a last-gasp point against Arsenal at Anfield on a night that will have pleased and frustrated Jurgen Klopp in equal measure.

Olivier Giroud’s second goal of the night looked to have handed Arsenal all three points, after the away side had twice come from behind thanks to the Frenchman and Aaron Ramsey, cancelling out efforts from the excellent Roberto Firmino.

Klopp can be pleased with the desire his team showed on a crazy night on Merseyside, and here are five talking points from the clash.

Another game, another set of goalkeeping errors – this time from the returning Belgian who continues to cost his side dearly.

Mignolet was at fault for both goals – beaten far too easily at his near post by Ramsey for Arsenal’s first, before ridiculously allowing himself to be beaten again at the same place by Giroud’s touch from an in-swinging corner that made it 2-2.

Glaring errors aside, the Belgium international offered no authority at the back – one brilliant, decisive second-half punch aside – bearing the brunt of voiced frustrations from Alberto Moreno and Mamadou Sakho in particular on separate occasions for his lack of alertness and assistance.

Mignolet’s sheepish reactions to the sloppy goals conceded smacked of a man feeling the mounting pressure he is under at Anfield, and with Danny Ward having dislodged Adam Bogdan on the bench on his Anfield return, taking Mignolet’s No. 1 spot could be the Welshman’s next move.

Klopp has said he is “absolutely satisfied” with his goalkeepers – leaving fans hoping the Belgian’s new five-year deal is a value-protecting exercise – but this cannot continue any longer with Mignolet costing the Reds vital points.

He had shown signs of exploding to life in recent games, and the Brazilian did just that with an excellent goalscoring display.

Without a goal since November, Firmino made up for lost time with two excellent finishes off either foot, with his curling right-foot strike for his second of the night a moment of stunning quality in particular.

Saw again how to get the best out of Roberto Firmino at times tonight. Lallana’s runs beyond and RF finding space – that dovetailing is key.

Denied a hat-trick by the crossbar, the 24-year-old’s work off the ball was equally as impressive, with his movement between lines dropping off Arsenal’s defence, interchanging with Adam Lallana, and much tidier touch and passing providing the Reds with a dangerous striking option.

It was a display everyone had been waiting for from the Brazil international, and Firmino must build on this dominant performance to become a key figure from this point on.

One of the big positives from the stalemate was the continued development of the dominating midfield partnership of Emre Can and Jordan Henderson.

Deployed as Liverpool’s engine room, the duo bossed the middle of the park in and out of possession, with Can driving Klopp’s side on in his box-to-box role – his shot after joining forward play forcing Petr Cech to parry to Firmino to slam home – as Henderson dictated the game with his intelligent distribution.

The athleticism of the pair gave Wenger’s men little foothold in the game, typified with the captain busting a gut to win the ball back with a sliding challenge on the edge of the away side’s box, which lead to Firmino’s second goal of the evening.

Their use of the ball to play some quick interchanging passes before springing an attack was a joy to watch at times, as they started to show a real understanding of each other’s game.

Full of energy, power and technique, Can and Henderson could boss midfields for a long time to come, and Wednesday night was a great start.

Continuing his recent struggles, it was another night of little impact for the out-of-sorts teenager.

Deployed as Liverpool’s pacy, wide outlet, the youngster enjoyed plenty of the ball but did precious little with it against Nacho Monreal, who undoubtedly had the measure of the 19-year-old, though Ibe didn’t quite look fully fit on return from his hamstring injury.

Credit must go to Ibe, at such a tender age, for his willingness to demand the ball and drive forward despite enduring a difficult night, but his lack of direction and knowhow in key areas proved a real source of frustration again as good opportunities to cause real danger went waste.

He fizzed one good ball across goal which should have been tapped home had Christian Benteke showed any desire to score, but too often the winger’s final pass, cross and decision-making was found wanting.

Ibe certainly has bags of potential, but he showed not enough of it.

An element of quality may be missing from performances currently, but heart, passion and character certainly isn’t from Klopp’s battling Reds.

Liverpool mirrored the energy and passion of their leader on the touchline, and they deserved the rewards for their relentless pursuit of forcing their way back into the game with Allen’s last-minute leveller.

Fans actually believe we can score late on in games now. Something we've been missing for a while.

At 3-2 down and facing the prospect of the visitors handing out a real punishment on the counter, Klopp’s side managed a comeback superbly – patient in their play, tenacious in their work out of possession and full of desire to conjure up that one last chance in the dying moments.

It was a breathless affair at Anfield, and Klopp’s men deserve huge praise for the character and never-say-die attitude they demonstrated in ensuring they came away with something to show for their efforts.

Next up for the Reds, is the small matter of Manchester United’s arrival on Merseyside.